Space is an Altar: Eye See You! 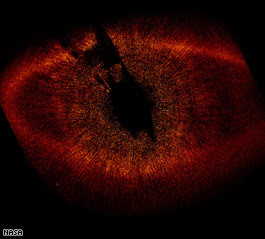 ...The discovery of the HR 8799 system is a crucial step on the road to the ultimate detection of another Earth," he said... "

"NASA's newly discovered planet, Fomalhaut b, is estimated to be roughly three times Jupiter's mass and 10.7 billion miles from its host star, Fomalhaut. NASA's images show Fomalhaut b orbiting the bright southern star Fomalhaut, which is said to be 16 times brighter than our sun and 25 light years away in the constellation Piscis Australis (Southern Fish)."- CNN