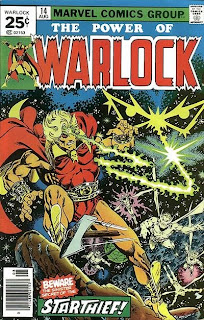 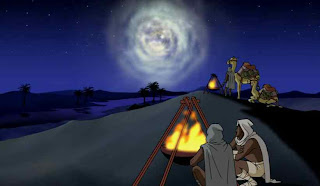 Stargate Opening in Prehistoric Egypt,
from Justice League Unlimited
Geeks are naturally skeptical. Which makes sense, since the revelation they bow to is an interior one (though at the same time is eminently tangible). This skepticism is also driven by a justifiable fear and hatred of their rival fantasy buffs, the Evangelical crowd. Geek culture has long been a whipping boy for hysterical preacher types and the Internet is allowing Geeks to fight back.
There was actually a Skeptic track at Dragon*Con this year (I actually saw the Amazing Randi there, who's not very amazing in person. In fact, he looks more like the Amazing Lawn Gnome) which may portend an increased level of activism in the future. Geek Gnostics playing at being agnostics- it's almost poetic. 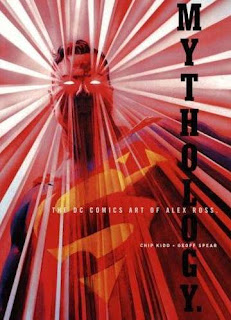 Now that the plutocrats who created and financed the Evangelical movement are watching their ill-gotten fortunes evaporate, it's an open question whether a movement which has been so intimately tied to (and such a vociferous cheerleader for) consumer culture, suburban excess and easy credit can survive the downturn.
Geek culture is increasingly filling the vacuum, even if most Geeks are almost militantly secularist (and as I've found out a sizable faction hate God talk of any variety, even with a small g). But I can't get Alex Ross' words about superhero fiction out of my head :

"As an adolescent you need order in your world, and superheroes have that, a sense of ethics that would never change- they would never be less than perfect, fighting for their ideals. They deal succinctly with moral issues, in a way that religion doesn't. Or rather, religion does, but in a much more complicated and often confusing manner."

As I said before it was an inability to acclimate myself to my environment that sent me rushing into the arms of Geek culture. Growing up I was at war with the forces of nature, or rather the forces of nature were at war with me- and still are.
Thinking about allergies has always led me back to Ancient Astronaut Theory (or Intervention Theory, if you like), since it's yet another maladaptive feature of the human biological condition. It led me to wonder if animals suffer from allergies and then I noticed that my Boston Terrier suffers terribly from them.
And then it occurred to me that he's the end result of an aggressive campaign of interventionist breeding, and is the descendant of several other artificially-bred varieties of the canine animal. Then I noticed this blurb, in The New Scientist:

A study that compared lab rodents with their wild counterparts could shed light on whether overly hygienic environments cause allergies and autoimmune disease.

Blood tests found more of a particular kind of immune protein in the wild animals, which may mean they are better at coping with potential allergens, researchers say.

It is estimated that some 40 to 50 million people suffer from allergies in the US alone. The fact that Western populations appear to have the highest rate of allergies prompted some scientists to come up with the “hygiene hypothesis”, which argues that exposure to more natural environments such as farms early in life helps train the body to respond appropriately to harmless microbes and pollen.

My interest in Interventionist Theory is hinged on human maladaptivity, behavioral and biological. We act as if we are utterly alien to this planetary environment- in fact, we act every bit like colonists have always done in foreign lands. In turn, the environment on this planet f-ing hates us and is trying to destroy us, outside of a few tropical paradises here and there. 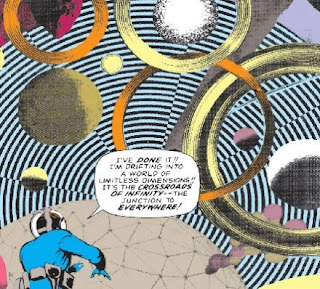 Jack Kirby. Of course.
And whether its self-appointed guardians want to accept it or not, Geek culture is swimming in the Gnostic realization that we are aliens here, we are "mutants," and we are hellbent on finding our biological parents. Alienation is the over-riding meta-theme in all Geek culture, as are motifs like escape, oppression and secret truths.
For people like me, who are more keenly attuned to this planet's hostility than others, these themes have a special revelance. It's interesting to note that the Justice League and the Legion of Super-Heroes are both headquartered in satellites and that Batman and Superman both retreat to remote, essentially alien sanctums.
Heroes like Doctor Fate and Doctor Strange fight their battles in the Gnostic Pleroma, as do the Fantastic Four when they journey to the Negative Zone or do the X-Men when they travel to the Savage Land. This is yet another constant theme in superhero stories (witness the Bottle City of Kandor). We are aliens here and we carry our homeland inside ourselves. This is the revelation of the ancient Gnostics and the modern ones as well.
Only the modern ones seem to be winning the public relations battle this time around.
at October 12, 2008