Secret Star Trek: Sisk-O-Bama and the Council of Nine 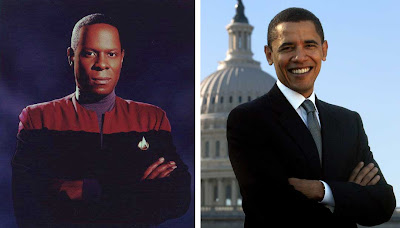 Following the smash success of Star Trek: The Next Generation, Paramount created a new spinoff series, Star Trek: Deep Space Nine. The story took place on a space station abandoned by the Cardassians, who had occupied a planet known as Bajora. The planet was crucial since it guarded an interdimensional wormhole that allowed intergalactic travel.
You can call it a Stargate if you like. Same difference.
The entry at Memory Alpha tells us that "the Bajoran wormhole is the only stable wormhole currently known to exist in the galaxy," and that "the wormhole is also the home of extra-dimensional beings who are worshipped by the Bajorans as the Prophets, and therefore is also sometimes referred to as the Celestial Temple."
Sounds a bit like the Nine, no? What else can we learn about the Prophets?

In normal space, the Prophets can only physically communicate with outsiders by possessing a body and using it as a vessel. The host is conscious of what is happening but has no control over its actions. The Prophets have no sense of linear time, so it is likely they live outside of the normal space-time continuum; however their existence has been recorded on Bajor for at least 30,000 years

My mistake. That doesn't sound a bit like the Nine. It sounds EXACTLY LIKE THE NINE. The officer in charge of Deep Space Nine was Commmander Benjamin Sisko. Sisko's origins were a bit unconventional. Broken family and all, and one of his parents was from out of town, you know. And Sisko wasn't just the guardian of the Bajorans, he was also their messiah:

In 2331, a Prophet traveled to Earth and possessed the body of a Human named Sarah. As Sarah, the Prophet married a native of Earth and conceived a child.

Shortly after giving birth, Sarah inexplicably abandoned her family and later died. It is thought that the Prophet visited Earth with the sole intention of ensuring the birth of Benjamin Sisko, and it left the body of Sarah leaving her with a family that was not hers, so she left without explanation.

It was no coincidence, then, that First Contact by the Federation was made by Starfleet officer Ben Sisko inside the wormhole in 2369. The Bajoran people celebrated the event and named Sisko as the emissary of the Prophets to Bajor.

Joseph Sisko owned "Sisko's Creole Kitchen" in New Orleans, and trained young Benjamin as a chef before the young Sisko left to attend Starfleet Academy. Apparently by that time New Orleans has fully recovered from Hurricane Katrina (that's pronounced Hurricane Ka-Hathor-Ein-A around these parts).
Wow, you know, the Bajoran adoration of Benjamin Sisko as Messiah kind of reminds me a lot of the adoration of Barack Obama as Messiah among many Americans. And both Sisko and Obama came from humble beginnings, and both came from mixed race marriages- well, mixed-interdimensional entity marriage in Sisko's case.

The role of Sisko went to Avery Brooks, an African American actor and intellectual and the first black commander-in chief on a Star Trek series. Like Barack Obama, Brooks is also a professor, in this case teaching theater at Rutgers University in Nova Caesarea.
He first rose to fame as "Hawk" on the Boston-based cop show Spenser: For Hire, based on the Robert B. Parker novels. His character was spun off into its own short-lived show, just before Brooks got the part on Deep Space Nine. "Hawk" of course is identified with the African sun god Horus.
As befitting a future warrior deity like Sisko.

The next series in the franchise, Star Trek: Voyager, starred Katherine Kiernan Mulgrew as Captain Kathryn Janeway, which of course is "Ka-Hathor-Ein/John's Way" in Secret Sun-ese. This was not the first starring TV role for the actress.

Mulgrew previously starred as Ka-Hathor-Ein Columbia on the short lived series Mrs. Columbo. Most of you out there are fully aware of the importance of this name, but here's a refresher on the etymology:

Late Latin name meaning "dove." Saint Columba was a 6th-century Irish monk who established a monastery on the island of Iona off the coast of Scotland. He is credited with the conversion of Scotland to Christianity.

So a Hawk and then a Dove. Horus and Hathor. How about that?

Voyager also featured Seven of Nine (the Nine, again) played by Jeri Ryan (incidentally, Mulgrew got her start on the daytime soap, Ryan's Hope). Jeri Ryan is of supreme semiotic importance, because it was her incendiary 1999 divorce suit against her husband, former Illinois Senator Jack Ryan, that was the crucial factor in the 2004 election of Democratic presidential candidate Barack Obama to that post.

Back in 2004, when Obama was a small-time State Senator from Illinois and running for a U.S. Senate seat, his GOP opponent was Jack Ryan, a super-wealthy businessman who was actually favored in the contest -- and who had gone through a messy divorce from ... Jeri Ryan.

The divorce was a slapfight of Hasselhoffian proportions, and Jeri's allegations that Jack had forced her to go to sex clubs in New York and Paris -- and wanted her to have sex with him in the clubs -- completely ruined Jack's campaign ... and Obama went on to win the seat. And now, perhaps, the one in the Oval Office.

The divorce was finalized on August 27, 1999. Do the math.
Let's stop to ponder all of this for a second- In The Stargate Conspiracy, Picknett and Prince argue that a disincarnate group of alien beings called the Council of Nine were psychically channeled by a group of trance mediums in the 1970s, and have since had/have a powerful grip on some of the most influential people in the US, if not the world.
Sounds crazy, right?
I'm starting to wonder. There's no doubt that Star Trek creator Gene Roddenberry worked directly with the group claiming to channel the Council of Nine. Now we see that there were nine major characters in Star Trek: The Next Generation, there was Deep Space Nine and now the 1999 divorce of the actress who played "Seven of Nine" on Voyager might be ultimately responsible for the election of the next US president.
Ponder that for a minute or two. It boggles the mind.