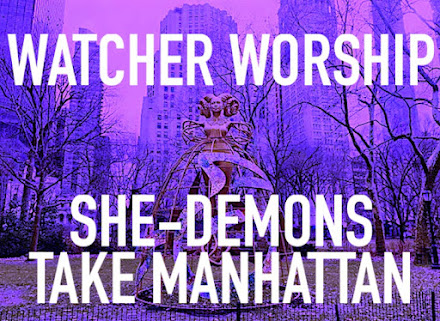 Why is there a hideous, chimeric, golden she-demon lurking atop the Appellate Court in Manhattan?

Because there's no better place than a temple of law to prove Knowles' Second and Third Laws.
First, you need to obey the Laws:

Knowles' First Law may eventually come into play with this thing:

KNOWLES' FIRST LAW: "Whenever a controversy over symbolism erupts in the media, it's usually disguising a completely different symbolic message altogether." 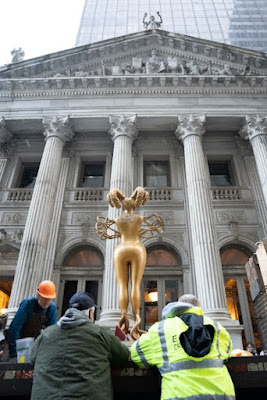 This may end up being a law too:

The sole purpose of postwar public art - particularly public sculpture and architecture - is to depress, degrade and demoralize the public. It's literal, deliberate, systematic psychological warfare. 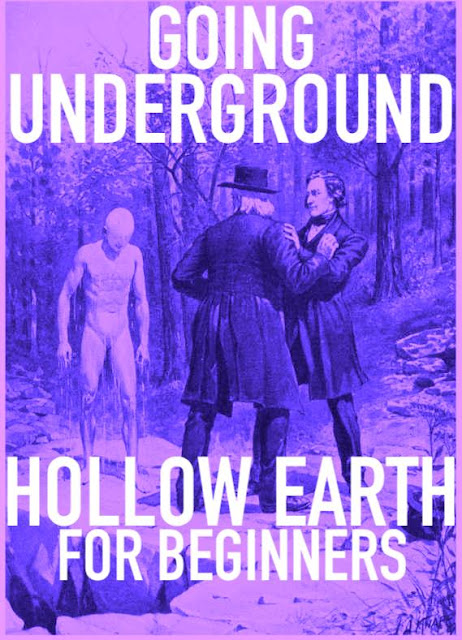 Before we get started, I'd like to invite you to come join us at the Secret Sun Institute of Advanced Synchromysticism for one of our massive livestream presentations, this one on the history and mystery of Hollow Earth. It's part of the ongoing series on Vril and Watcher worship, so you really can't afford to miss this one.
Click here for more info. 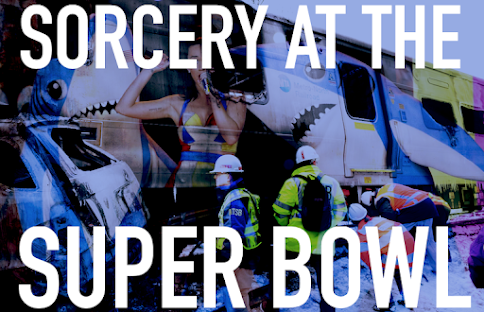 And coming up on February 11th, there will be another epic livestream on the recent history of occult rituals disguised as "Super Bowl halftime shows." This one will blow your mind, I guarantee it.
Again, click here for the skinny. 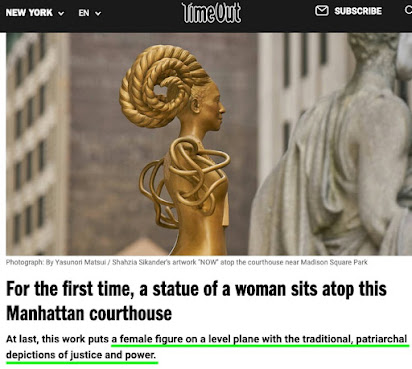 You know this is all deadly serious, because this latest display of cultic fantaticism has been insulated from criticism with an extremely thick and florid coating of nonsensical Wokespeak.
From the NY Times, as you'd expect:

Move Over Moses and Zoroaster: Manhattan Has a New Female Lawgiver

Frenzied commuters in New York’s Flatiron district have been stopped in their tracks in recent days by an unlikely apparition near Moses, Confucius and Zoroaster. Standing atop the grandiose state courthouse is a shimmering, golden eight-foot female sculpture, emerging from a pink lotus flower and wearing Justice Ruth Bader Ginsburg’s signature lace collar.

Staring regally ahead with hair braided like spiraling horns, the sculpture, installed as part of an exhibition that opened last week, is the first female to adorn one of the courthouse’s 10 plinths, dominated for more than a century by now weathered statues representing great lawgivers throughout the ages — all of them men.

Shahzia Sikander, 53, the paradigm-busting Pakistani American artist behind the work, said the sculpture was part of an urgent and necessary cultural reckoning underway as New York, along with cities across the world, reconsiders traditional representations of power in public spaces and recasts civic structures to better reflect 21st-century social mores. 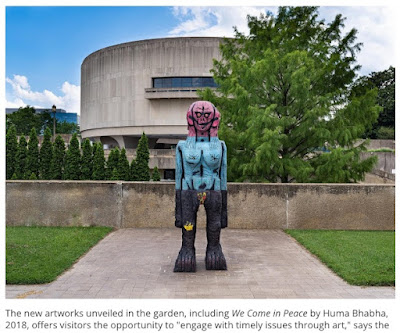 Weirdly enough, there's another hideous she-demon sculpted by another female Pakistani artist which was on the roof of the Met Museum, but is now lording over the Mall in Washington DC.
Interesting times we live in.
Continuing with the woke-glop:

“She is a fierce woman and a form of resistance in a space that has historically been dominated by patriarchal representation,” said Sikander, who previously served on the New York Mayoral Advisory Commission of City Art, Monuments and Markers. She said the work was called “NOW” because it was needed “now,” at a time when women’s reproductive rights were under siege after the U.S. Supreme Court in June overturned the constitutional right to abortion.

The “NOW” sculpture, channeling the “Notorious R.B.G.,” will be removed in June, when the work travels to Houston.Credit...Vincent Tullo for The New York Times

“With Ginsburg’s death and the reversal of Roe, there was a setback to women’s constitutional progress,” she wrote in her artist’s statement.

With an acrimonious culture war over abortion buffeting the country, the sculpture raises the question of whether it is appropriate to place an artwork that has been partially framed as a response to the overturning of a Supreme Court decision atop a state supreme courthouse building.

Bear in mind the people behind all of this would very much like to replace the entire female sex if and when the medical technology for viable industrial-scale cloning is ever ready. Just so there's no confusion.
More:

Justice Dianne T. Renwick, the first Black female justice at the Appellate Division, First Department, who chairs a committee examining issues of diversity, said that, in the wake of the killing of George Floyd in 2020, the court had undertaken a long overdue effort to address gender and racial bias since the courthouse had been built, at a time when women and people of color were erased and overlooked.

While the courthouse has allegorical female figures, she said that no figures of female judges or justices had previously existed outside or inside the courthouse, while only one woman — Betty Weinberg Ellerin, a trailblazing judge and the first woman to be appointed presiding justice of the Appellate Division — was named on the courtroom’s ornate stained-glass ceiling dome on a section honoring those who had held that position.

She lamented that another area of the dome citing historic judges and lawyers in American history included the name Roger Brooke Taney, the U.S. Supreme Court justice who wrote the racist Dred Scott decision, which ruled that African Americans were not and could not be citizens. She said she and other justices wanted his name removed from the dome and that talks were underway to expunge his name, and potentially place it in the court’s library, with an explanatory note describing his role in American history.

And you can tell all your friends (especially Boomers and Liber ALs) who scoff at anything that upsets their childish and excruciatingly-outdated worldview that this is a deliberate, intentional and coordinated effort to destroy their cherished little illusions and - eventually - their entire lives.
Capitulation will not help them. Quite the contrary:

Amid an international debate over the need to diversify public spaces, cities like Bristol, Arlington and Antwerp, among others, have been removing monuments honoring historic figures who advocated slavery or held racist views.

While many cultural observers see this exercise as essential, it has, at times, pitted modernizers against some conservationists and scholars who argue that public spaces, be they streets, statues or houses of law, should be preserved as historical records, no matter how egregious or anachronistic their iconography. The movement to alter public spaces is not new, though it has gained urgency in recent years.

Claire Bishop, a British critic and professor of art history at the Graduate Center of the City University of New York, observed that Sikander’s sculptures were part of a decades-long movement in which artists have been doggedly intervening in monumental statuary and official sites or buildings.

“Maybe she can help channel us back to reinstating Roe v. Wade,” Bishop added, referring to the “NOW” sculpture, which she called “a magical hybrid plant-animal” that was emblematic of the need for “more radiant female energy on the facade of every courthouse.”

FFS.
No, honey. You and all your fellow travelers are being used. And when the Great Work is accomplished, you will see just how little room there will be for any of you in the New/Old Order.
You will see the coming of a world that will make The Handmaid's Take look like the Michigan Womyn's Festival and there will no going back. And again, that's if cloning technology doesn't lead to the end of biological sex entirely. 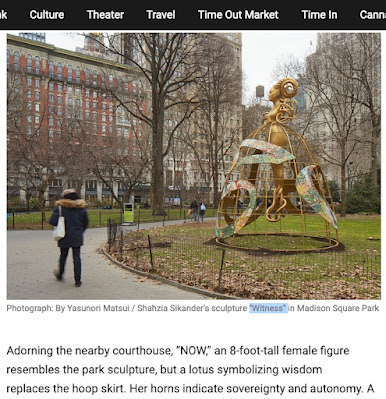 So here are two statues in this latest display of what looks uncannily like yet more examples of fundamentalist Watcher Worship - "Now" and "Witness." 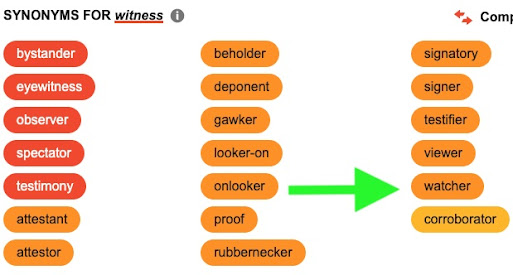 No brainer there, right? 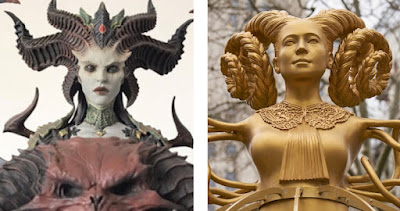 It's not your imagination- these things look EXTREMELY demonic.
Also, ewes don't have rams' horns, if you get my meaning. But like I keep trying to tell the clueless and gullible, the lunatics driving all this want to do away with ewes altogether. 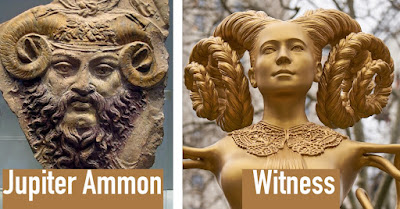 And of course, we see the callback to the Horned and Hidden God of Kings and Conquerors.

Speaking of Watcher cults, thirteen years ago, Madison Square was also the venue of the "Event Horizon" Watcher-worship "art installation." 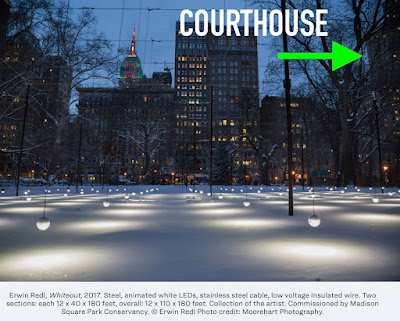 And the creepy Whiteout Orb-adoration display back in 2017, the Year that LARPd the Secret Sun's most unhinged rants on a worldwide scale. 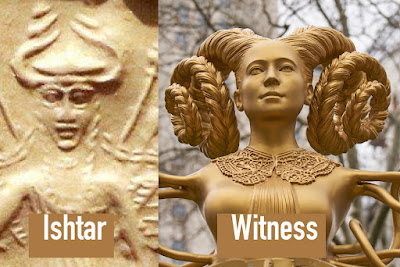 Note the horns on Ishtar, whose priestesses were all eunuchs (the Kalu AKA the Gala). 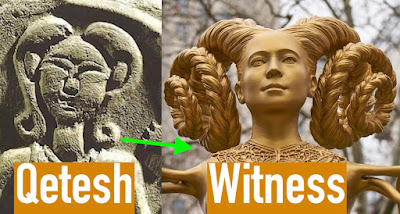 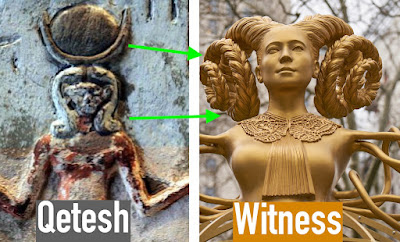 These things also resemble Ishtar's Canaanite/Ugaritic/Egyptian equivalent, Qetesh, with both horns and braids. And you know all about the Qedesh by now, right? 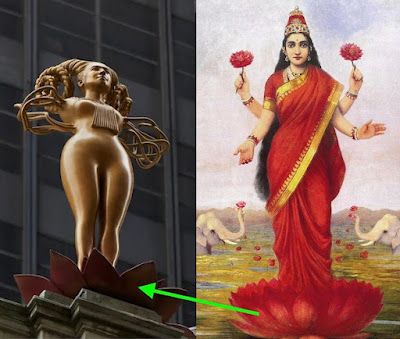 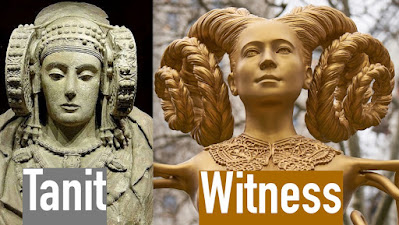 There's also a similar headdress motif to Tanit, the Carthaginian Queen of Heaven and goddess of child sacrifice. 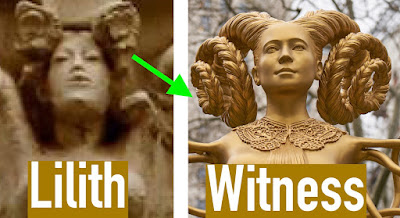 And to Lilith, "the First Eve," derived from the Babylonian Lilitu. In fact the entire installation is called "Hevah," meaning Eve. 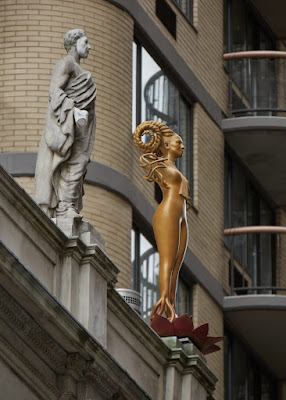 Did I mention this is installed on a state courthouse?
Let's all hope we never end up before a judge in that lovely little temple there. 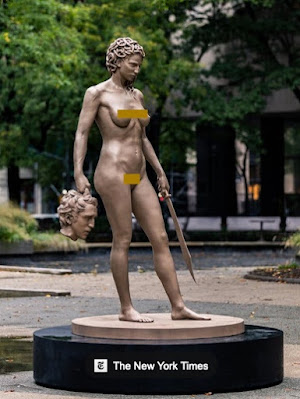 There's a not-entirely-dissimilar statue of Medusa outside another Manhattan courthouse. Note the beheaded Perseus AKA Mithras.

I'm sure you'll be getting equal justice under the law there, chaps. 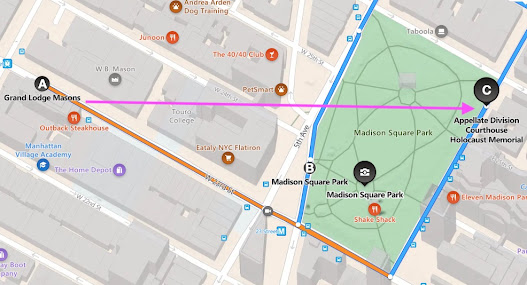 And of course, Eve/Lilith/Watcher/whatever is in an interesting neighborhood: a short walk from the Grand Lodge of New York on 23rd Street.

I hope all of this is getting through to you. This is real, this is happening. It's happening everywhere and it's happening at an increasingly-rapid clip. Which indicates either impunity or desperation. Neither of which are exactly comforting.