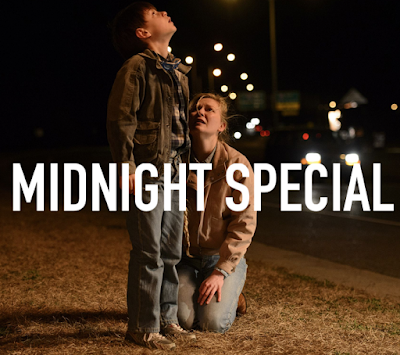 Being the age I am and having consumed as much pop culture junk as I have, I’ve come to a point in which I have near-zero interest in "escapist" entertainment.

Of course, there’s less and less of that to be found as the entertainment industry reaches its terminal point of ideologically-aided mass suicide (a process kicked off in the C-suites following the panic instilled by the Occupy movements) but that’s a story for another time.

I’m also at a point now where I have close to zero interest in any narrative that doesn’t ask the big, cosmic-type questions and/or doesn’t have an explicit small-S spiritualist or consciousness orientation.

This, of course, relegates me to most consuming obscure, independent and/or “flop” content, as I wrote in the “My Favorite Flops” section in The Endless American Midnight. And given what the masses consume— and the almost-total creative graveyard mainstream culture has become — I’m OK with that.

Which brings us to Midnight Special.

Note: there are going to be spoilers like you wouldn’t believe, so if you want to go watch it on Netflix first, please do so.

I was aware of Midnight Special when it was initially released, and had watched the trailer and a few clips at the time. I’m not sure if it was how the material was being presented (the trailer was cut to favor the CGI eye candy at the film’s climax) or my general mindset, but it looked like another of those boring superhero-kids-without-costumes movies we were seeing so much of back then.

Boy, was I wrong.

Midnight Special is practically a sizzle reel of Secret Sun obsessions, folding in Magonian, Gnostic and extracanonical Biblical themes like the Watchers and the Nephilim. There’s all kinds of metatext woven into the narrative, often slyly roasting the aforementioned superhero-kids-without-costumes movies.

Better still, writer/director Jeff Nichols bears down on hard on the Southern Noir and social-realist themes and techniques, ensuring that the viewer is placed explicitly in the downscale permanent midnight of a contemporary rural America under the onslaught of the totalizing power of the military-corporate-intelligence axis, which brooks absolutely no dissent or opting out from the Neo-Feudalist agenda bearing down on us like a hammer.

The plot is deceptively simple: a kid named Alton Mayer is taken by his birth father from “The Ranch,” a cult compound run by the boy’s adoptive father, the Reverend Calvin Meyer (played by Sam Shephard). The Ranch gets on the Federal Government’s radar because the Reverend’s sermons somehow incorporate material taken from classified satellite transmissions and is raided by an FBI task force.

The government then sets out to capture the boy, his father (Roy Tamlin, played by Michael Shannon), and his father’s friend Lucas (played by Joel Edgerton). But as we see, the boy demonstrates near-godlike powers (for instance, telekinetically destroying a satellite tasked to track his unique heat signature), which the authorities were totally unaware of.

Alton and his father are on their way to reach a specific location by a specific date - March 6 - for reasons not known until the film’s climax. Rev. Meyer has sent two of his followers to recapture Alton, who is soon reunited with his birth mother Sarah (played by Kirsten Dunst). The two cultists kidnap Alton after a raid on the motel room his family are staying in. However, they are soon nabbed by the Feds and Alton is interrogated by an NSA agent (Paul Sevier, played by Adam Driver).

Sevier, given a demonstration of Alton’s superpowers, quickly figures that the boy isn’t of this world, but of one whose people have been watching humanity for a very long time. Realizing he is totally out of his depth — or of anyone’s depth— Sevier returns the boy to his family just in time for the big reveal — an enormous invisible city built upon the salt marshes on the Gulf Coast, populated by beings made of light.

So, where do we start?

Click here to read more about this flat-out Synchromystic masterpiece, which gets the Secret Sun's "Highest Possible" recommendation.