Gimme That Old-Time Religion. OK, Maybe Not THAT Old. 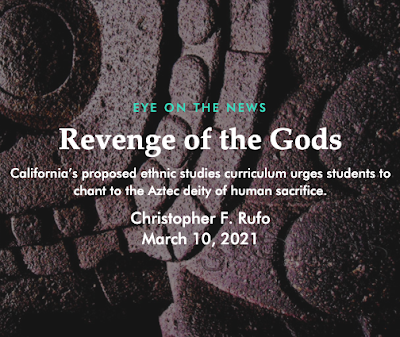 You know the old saying: "The Secret Sun is always right; especially when it's wrong."
What I mean by that is OCD. Never discount the power of OCD.
With that in mind, why don't we rewind the chronometer back to January, where I dropped some futuristic science in my post on JLo's NYE ritual in Time Squared:

Knowles' Second Law is, "The old blood sacrifice state cults will be re-established under the cover of Woke."

Knowles' Second Law, Paragraph A is, "The old statues currently being torn down will eventually be replaced by the icons and idols of the new/old state cult."

Admit it: you thought I was crazy. You thought I was just talking a bunch of nonsense to clog up bandwidth again. Well, have a gander at what JB gave us the heads-up on. Apparently, California is moving quickly and aggressively to make adoration of the old gods mandatory in public schools.

It all starts with the usual academobabble:

R. Tolteka Cuauhtin, the original co-chair of the Ethnic Studies Model Curriculum, developed much of the material regarding early American history. In his book Rethinking Ethnic Studies, which is cited throughout the curriculum, Cuauhtin argues that the United States was founded on a “Eurocentric, white supremacist (racist, anti-Black, anti-Indigenous), capitalist (classist), patriarchal (sexist and misogynistic), heteropatriarchal (homophobic), and anthropocentric paradigm brought from Europe.”

Is this intersextional word salad the kind of thing horned-up eggheads like this character use to hypnotize hottie twinks out of their Calvins? I'm guessing yes, in most cases.

So far, so what, right? Well, let's get to the meat of this jargon soup:

The religious narrative is even more disturbing. Cuauhtin developed a related “mandala” claiming that white Christians committed “theocide” against indigenous tribes, killing their gods and replacing them with Christianity. White settlers thus established a regime of “coloniality, dehumanization, and genocide,” characterized by the “explicit erasure and replacement of holistic Indigeneity and humanity.”

The solution, according to Cuauhtin and the ethnic studies curriculum, is to “name, speak to, resist, and transform the hegemonic Eurocentric neocolonial condition” in a posture of “transformational resistance.”

I'd love to give this guy a DNA test. I'm betting at least 75% of his genome would be Conquistadorish.

So let's get to the heart of the matter, no pun intended. Because as everyone will eventually come to realize, Wokeness is just a table setting for the return of the old state cults. And in many cases, those cults will have folx like Cruisin' Cuauhtin begging for the soft-hearted Patriarchs to come back and stop the carnage.

Assuming his paymasters don't "consecrate" him in the first batch, which is highly probable:

This religious concept is fleshed out in the model curriculum’s official “ethnic studies community chant.” The curriculum recommends that teachers lead their students in a series of indigenous songs, chants, and affirmations, including the “In Lak Ech Affirmation,” which appeals directly to the Aztec gods.

Students first clap and chant to the god Tezkatlipoka—whom the Aztecs traditionally worshipped with human sacrifice and cannibalism—asking him for the power to be “warriors” for “social justice.”

Next, the students chant to the gods Quetzalcoatl, Huitzilopochtli, and Xipe Totek, seeking “healing epistemologies” and “a revolutionary spirit.”

Huitzilopochtli, in particular, is the Aztec deity of war and inspired hundreds of thousands of human sacrifices during Aztec rule. Finally, the chant comes to a climax with a request for “liberation, transformation, [and] decolonization,” after which students shout “Panche beh! Panche beh!” in pursuit of ultimate “critical consciousness.” 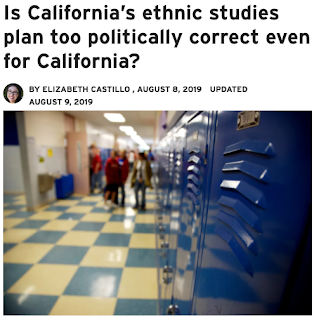 The Woke may not realize it but Cruisin' Cuauhtin is letting the cat out of the bag as to what "decolonization" really means to the people writing the checks for this campaign: worldwide abolition of mamby-pamby priestcraft and a return to the time-tested-and-true rites of blood and fire.

Rod "Everything I Don't Like is Gnosticism" Dreher then takes the baton:

The children will chant to Xipe Totec (Xipe Totek), who, according to Wikipedia’s lengthy and detailed article on human sacrifice in Aztec culture:

Xipe Totec, known as “Our Lord the Flayed One”, is the god of rebirth, agriculture, the seasons, and craftsmen.

That's essentially the Aztec Osiris or Dionysus, for those keeping score at home.

Xipe Totec was worshipped extensively during the festival of Tlacaxipehualiztli, in which captured warriors and slaves were sacrificed in the ceremonial center of the city of Tenochtitlan. For forty days prior to their sacrifice one victim would be chosen from each ward of the city to act as ixiptla, dress and live as Xipe Totec.

The victims were then taken to the Xipe Totec’s temple where their hearts would be removed, their bodies dismembered, and their body parts divided up to be later eaten. Prior to death and dismemberment the victim’s skin would be removed and worn by individuals who traveled throughout the city fighting battles and collecting gifts from the citizens.

California children will also be taught to chant to Huitzilopochtli, who, according to Wikipedia:

When the Aztecs sacrificed people to Huitzilopochtli (the god with warlike aspects) the victim would be placed on a sacrificial stone.  The priest would then cut through the abdomen with an obsidian or flint blade. The heart would be torn out still beating and held towards the sky in honor to the Sun-God.

Still think the "Gnostics" are really who you need to be worrying about, Rod? 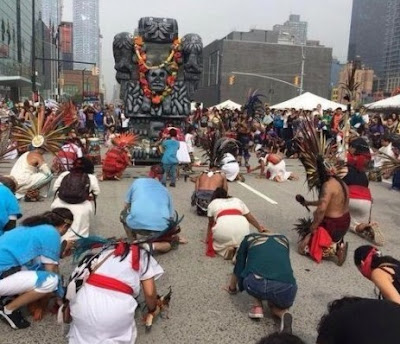 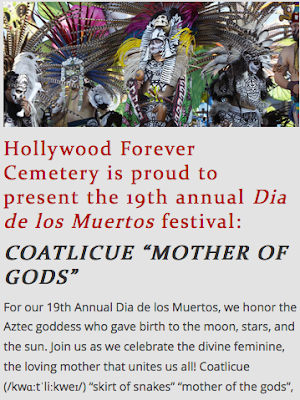 Me, I'm not surprised at this latest turn of events, given that mass open-air rituals to Coatlicue have already been held in New York and Los Angeles, way back in the bygone days of 2018. See, some folks think the old ways were best for keeping the serfs in their place, where they're much better off, happier without having to do all that pesky thinking for themselves.
I guess what I'm really trying to say is that the MTV Awards in 2030 are going to be lit.
Comment while it's still permissible by law in the Den of Intrigue.