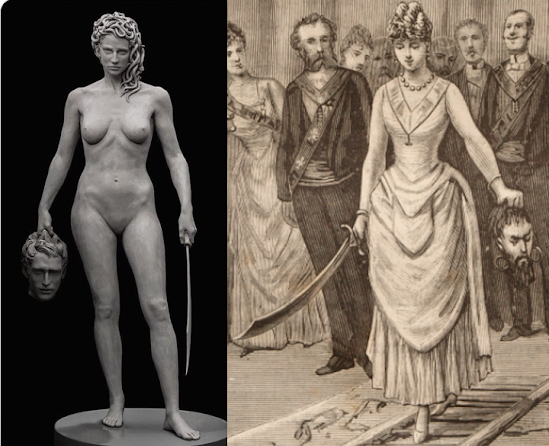 You know, people often ask me what the point of all this Secret Sun business is. I mean, don't we all realize that the mucky-mucks are always up to some kind of shenanigans?
Well, sure. But in the New Normal, when poisonous Woke politics are being used to install the new/old cults of state and their icons, I think it's very important to understand just exactly what is we're looking at, lest we fall into the same traps of entrainment so many others are. 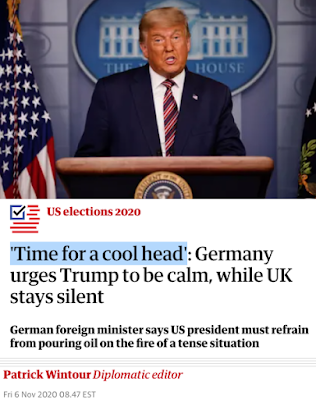 There's been a lot of beheading iconography floating around the news, which I'd guess might have something to do with the Killing of the Divine King ritual we're seeing played out in real time. Germany is getting in on the fun, which you'd expect by now. 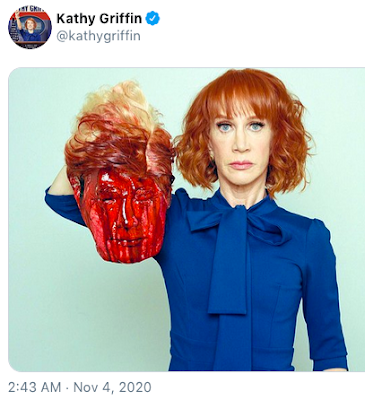 Hideous has-been Kathy Griffin reposted the photo that ostensibly wrecked her career. Of course, the "Trump" head is really her daddy, because that's what's at the core of Hollywood's Trump obsession.
They love him, they hate him, they love to hate him, they hate to love him. The problem is that Trump is going to leave this mortal coil one day and they won't have anyone left to hate but themselves.
I don't really like Trump much either (no offense to any of his supporters), so what I do is I limit my exposure to him as much as humanly possible. But for the COVID-idled sickos, freaks and Chuckee Cheese chefs that populate Hollywood and the news media, losing Trump as their designated Emmanuel Goldstein would utterly devastate them.
If Trump concedes, MSNBC and CNN's ratings vanish in a heartbeat. The Twitter followings of an entire ecosphere of swamp lampreys, media maggots and Hollywood has-beens (Takei, Reiner, Griffin, Pearlman, etc etc) collapses as well. Maybe a bit more slowly, but inexorably. So much so that it may bring the Project BLUEBIRD social media giant to its knees as well.
Then this absolute trash. 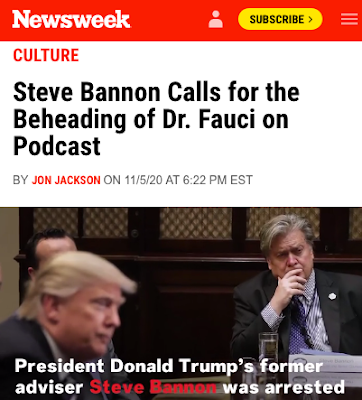 Forever looking to inject himself in the news cycle, Steve Bannon got his wish and was booted from Twitter for trying to hop on the headless bandwagon. Love him or loathe him, but don't say the dude isn't a canny manipulator. 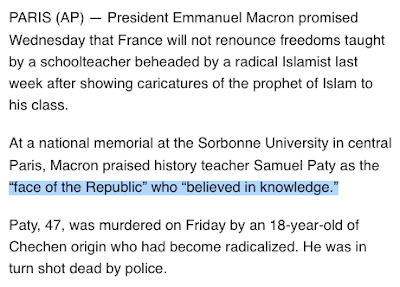 And we've also had the alleged terrorist beheadings in France. Now, not to be in any way insensitive to the victims, but have you ever noticed how the people who carry out these attacks are almost always "known wolves," with long records of contact with the authorities?
Not saying anything, just saying it's something to wonder about in your daily travels. 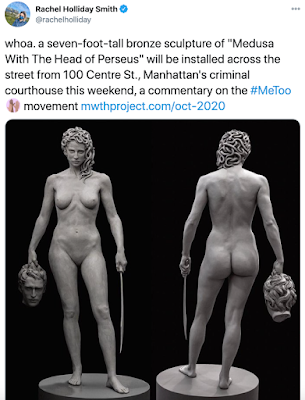 And then we have our old friend Medusa, now greeting folks at the door of the Manhattan Criminal Courthouse. Now, for jaded symbol junkies like me, this whole thing stinks on dry ice. But it wasn't until a reader pointed me to a famous document from the wacky, wonderful world of Freemly weirdness that it finally hit me what we're looking at. 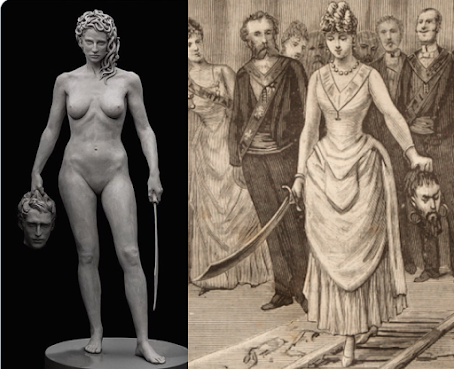 The image on the right is of an alleged "Judith Rite" of the Order of the Eastern Star, as depicted in a notorious best-seller Les Mysteres de Franc Maconnerie by the alleged hoaxer Leo Taxil. It's from this book that the modern meme of an order of "Luciferians" originally stems from.

Taxil filled his book with a host of lurid and sensationalistic stories that caused an uproar in Europe at the time. It's since been a go-to source for anti-Freemie types, even though the author appeared to confess to the fabrication. 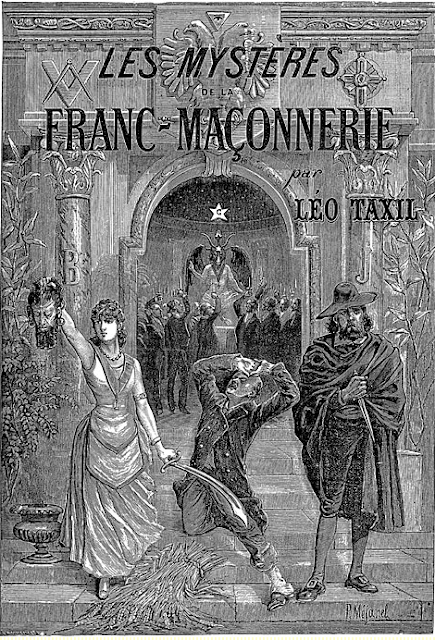 I say "appeared to," not necessarily because I believe he was telling the truth about the stodgy Freemie orders of the time, but because I very much get the feeling that this was a disinfo op, meant to discredit Freem-foes and throw off any researching some of the more exotic secret orders operating all over the Western world at the time.
Here's an excerpt from Taxil's confession:

"The public made me what I am, the arch-liar of the period, for when I first commenced to write against the Masons my object was amusement pure and simple. The crimes laid at their door were so grotesque, so impossible, so widely exaggerated, I thought everybody would see the joke and give me credit for originating a new line of humour. But my readers wouldn't have it so; they accepted my fables as gospel truth, and the more I lied for the purpose of showing that I lied, the more convinced became they that I was a paragon of veracity."

Smell that? That's the smell of bullshit in the air.
Now, it's possible Taxil was being honest. it's also possible he was coerced into a confession. But for my money, it's probable that this protest-too-much mea culpa was part of the op, especially since Taxil also took aim at the Church. It's interesting to note he was far less apologetic for that particular transgression.
While I can't seem to find any Eastern Star ritual re-enacting the Judith and Holofernes story (that's the guy with the severed head), my guess would be this was one of those misdirections I think Taxil was floating... 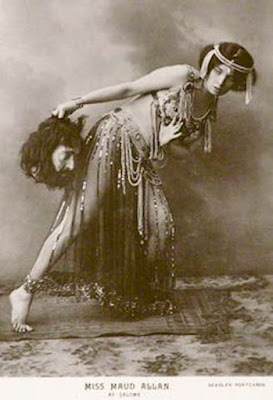 ...because a severed head is at the very core of Masonic Orders (including the Eastern Star) in the form of their patron saint, John the Baptist.
It's also possible that Taxil was satirizing a Co-Masonic ritual (the irregular mixed-sex lodges) since they are far less to get a handle on. But given the whole Hiram Abiff business, it's certainly reasonable to assume there might be a Baptist ritual, particularly in an irregular lodge.
Either way, my bet is we're getting some Crypto- or Pseudo-Masonic iconography with old Medusa there, particularly when you consider the heavy involvement of lawyers and judges in Masonic orders. And cops, for that matter. Particularly given the nakedness, in light of Salome getting Herod to pop John's top by giving him a hot lap dance or five. 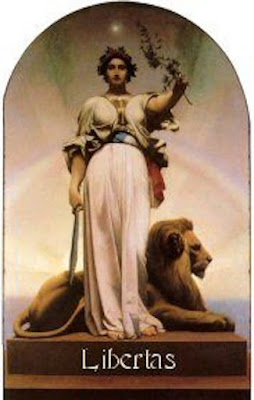 There are also precedents for that particular pose in the Taxil book, namely the goddess Liberty, who was clearly very important to Masonic orders.
Note we have that all-important Virgo-Leo cusp being depicted, yet again. What is it with that thing? Educate me. 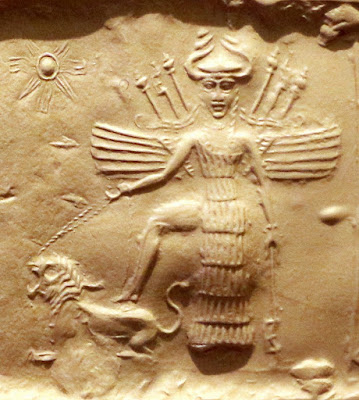 Virgo-Leo shows up again in this famous image of Inanna/Ishtar, whom I believe is probably the ultimate mitochondrial Eve of all these later goddess images like Liberty, Victory, etc etc 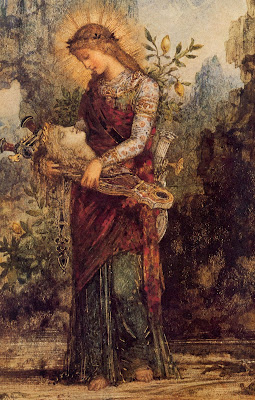 And of course the beheaded demigod is familiar to us from Orpheus, who was murdered and dismembered by kill-crazy Maenads, pissed off on account he wouldn't worship Dionysus with them (translation: "he wouldn't get drunk and fuck them").
So, one of my current insane theories is that these statues are getting pulled down by BLM and Antifa because they're eventually going to be replaced by the sacred icons of the new faith, which is currently using Woke as a cover. We've already seen the public installation of Baphomet statues by Dashing Doug Mesner and his crew of misfit toys, and now we're seeing Medusa and other gruesome idols as well. 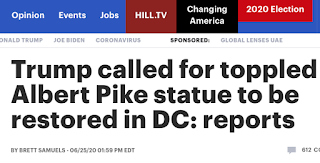 Though there is one obvious exception to the replacement rule, isn't there? 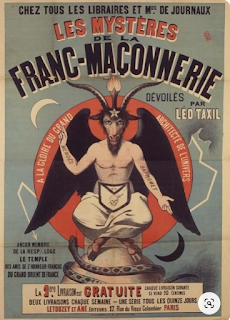 Another French weirdo pervert -- Alphonse Louis Constant AKA Eliphas Levi-- originally designed the Baphomet we all know and don't love  today, but Levi gave his version boobies, because that was his kink, OK?
But the whole "Baphomet" thing comes originally from the Templars, though no one could quite agree on what Baphomet was for them. Some argued it was the Prophet Mohammed, others said it was the skull of John the Baptist, some even said it was an icon with three faces, which got me thinking on... 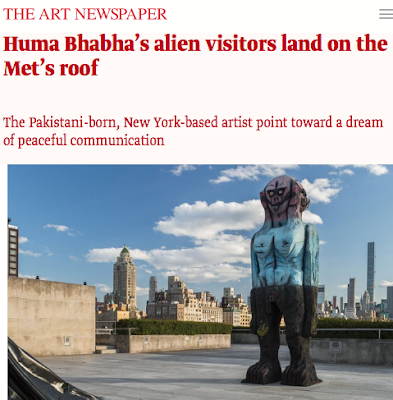 ...Humbaba's multi-faced "We Come in Peace" icon, which was lording over the Metropolitan Museum of Art during their big Medusa exhibit and the "Heavenly Bodies" Gala. Note this lovely creature has some nonbinary boobies as well as too many faces.
Given all the evidence here, my verdict is the gender-switched Medusa-Perseus icon is more Freemish hijinks and monkeyshines. It hits a lot of the expected bases. I'll have to do some digging and find out who exactly was behind it.
Algol seems to have some significance for highly-initiated Freemers via Pike. Then again, what icon or symbol in the history of everything everywhere didn't have some significance for Pike?