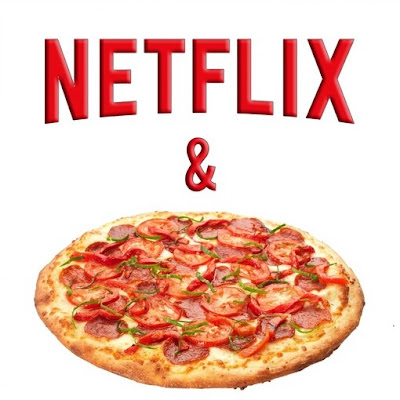 I was going to write another installment on Raised by Wolves, but I fell asleep.

I woke up, thought about it again, then instantly passed out again. Really, no one cares about that nonsense, so why bother? 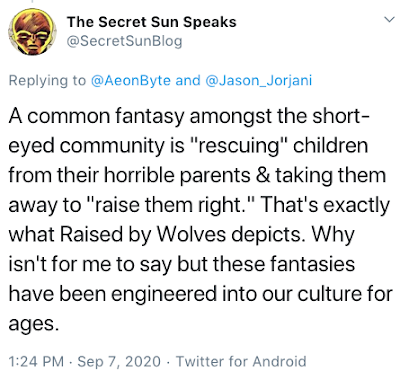 I did think it interesting that the observations I'd originally made about the show-- that its premise was a textbook short-eyes fantasy -- kind of dovetailed with the explosion over the pervoid Netflix film Cuties and the apparent apoplexy it's causing for the mainstream media.

Who, of course, have all claimed the film as the hill they choose to die on (if only). 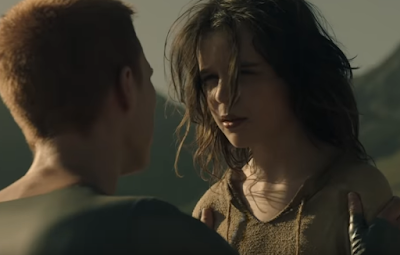 I was kind of thinking Raised by Wolves was slyly critiquing the two dominant cults in show business in general and Hollywood in particular -- namely the Trans cult and the MAP cult-- but then I thought maybe it wasn't.

Then I thought I don't give a single fuck, because I'm so sick of seeing that crap, no matter if it's being parodied or not.

I was actually joking with a friend a while back when I said there'll only be two legally-permissible sexual preferences in the technocratic future: translesbian and short-eyes. But I think the joke is ultimately on me.

On all of us, really. 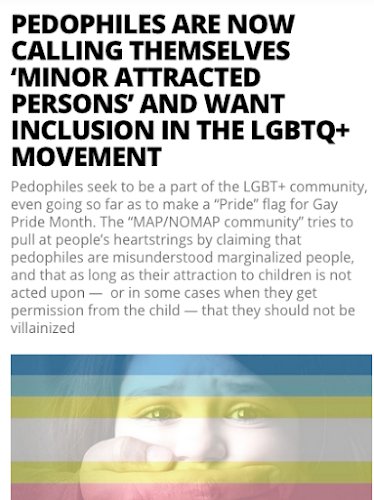 I actually don't like writing much about short-eyes issues on account of I find the whole thing disgusting and depressing.

I don't caucus with a lot of the people -- QENom, ChuckeeCheeseGate, etc -- who've made it their beat, and I don't much care for how buckshot theorizing trivializes the issue and creates an opportunity for the cuties cult to scream persecution over some of the more irresponsible research.

Part of the normalization process with these issues is using the extremists among the opposition as a cudgel of shame against the more responsible critics. And since we are all weak and cowardly little bitches in this society, even a minuscule loss of Woke-points is enough to send most normies onto any freakish, hellbound crusade, just please don't call me a bigot!

It's why I have a problem with using the p-word against people like Epstein or Bryan Singer. They are/were predators and pervos, but the p-word really needs to be saved for the very dangerous sickos who lust after pre-adolescents. 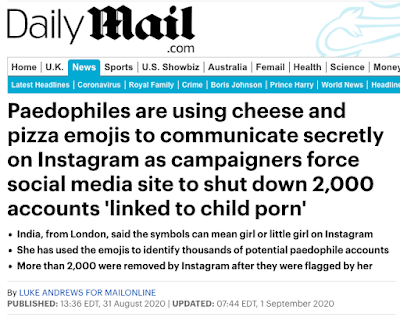 Otherwise, you can shame the normies onto the slippery-slope like so: "Well, they're technically minors, sure, but they were old enough to know what they were getting into with an Epstein or whomever. Does that really make them victims?"

The next thing you know some lunatic will try passing a law decriminalizing sex with a 14 year-old.

But here we have the real deal-- straight-up peteOs jonesing on prepubescent children-- and not jailbait junkies or twink-trawlers. This film is drawing a lot of aspiring child molesters out of their fetid foxholes, believing that the blessing given this film by the elite overclasses means it's finally their time to shine.

I fear it will ultimately come to ruin for them. But who knows anymore; demonic spirits are having a field day lately, especially in America.

Go ahead and scoff; I did for years. Then I opened my eyes. 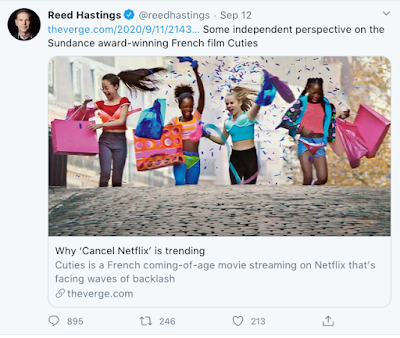 I don't know what the thinking was when it came to greenlighting a coming of age story about preteen girls dancing like truckstop strippers, other than the fact that the movie and TV business really is chock-full of short-eyed creeps. Such as the co-founder of the same Sundance Film Festival whose blessing Netflix is waving around in order to try to kosher Cuties.

Me, I think 'twerking' is disgusting even when grown women do it. Not so much out of prudery, but out of the fact that it just looks stupid and gross.  Plus, unsexy.

I don't find it sexy for the same reason I don't find pole dancing sexy. It's just too blatant and obvious. There's no mystery or seduction there. Once the naughty bits come out, the imagination is stymied.

But Netflix seems hellbent on riding this train as far as they can take it, which at the moment looks like smack-dab into a brick wall.

The fish is rotting from the very tippy-top: Reed Hastings himself deigned to descend from Olympus to man the stanchions for this puppypron. Seems to be a very important issue for the man. So important that he's willing to take a financial beating to beat its drum. 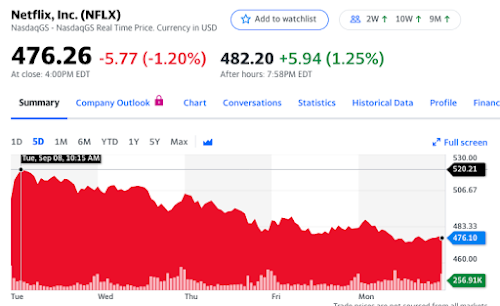 Netflix's either greasing a lot of palms or are very well networked with kindred spirits, because they're getting a lot of support from the mainstream media for this folly.  However, they're getting considerably less support from Wall Street. But what's a loss of 12 billion dollars in market cap when Uncle György can just float you the difference, right? 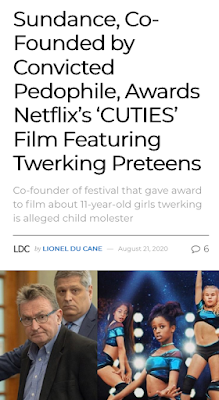 Most importantly, Hollywood kiddie-fiddling is a cult: a classic taboo-violation cult, to be precise.

You needn't spend more than a day around show biz people in Los Angeles to realize they're all pathological megalomaniacs and/or narcissists who hate the rest of America. Whenever there's a lull in a conversation anywhere in Southern California, you can always count on someone to start ranting and drooling about how stupid those hillbillies in Nebraska or Iowa are.

Hell, just go on Twitter if you don't believe me.

And that's just the plebes; the Olympians among them think they've climbed to the summit of all creation and aren't subject to the same rules we miserable little ants are.

So if they want to fondle eight year-old girls, then needs must. Don't little Amber's parents want her to get that role as "Girl #4" in their new Hulu series? What's "a little mild touching-up," as Saint Dawkins put it, if the little dear gets her big break? 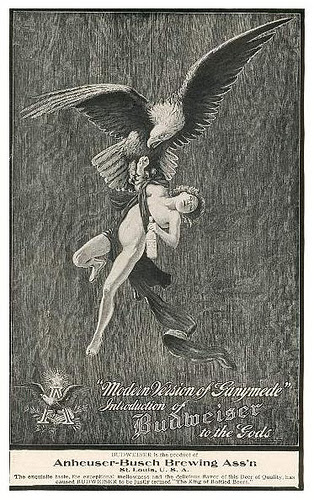 There's ample evidence in the history books for cuties cults. "Greek Love," as p*d*r*sty is euphemistically called, is actually believed to have originated in Zeus-worshipping warrior cults and then gone mainstream among the Hellenes.

The Romans and all those who followed were no less devoted to the practice, they just tended to be a bit more discreet about it. Cultural differences and all.

My recent dive into the fever swamp of the late Kenneth Grant's swiss-cheese brain demonstrated to my satisfaction that most of the rituals he's disguising with terms looted at random from his Man, Myth and Magic encyclopedia set are actually all about raping menstruating thirteen year-olds, a hobby which he seems to have picked up from Crowley.

I have a strong feeling Grant might have given sickos like Jimmy Savile a few pointers in this regard.

You see, the Atheist Age hasn't done away with cults, it's done precisely the opposite. It's just that a lot of the cults-- like the various Khmer Woke and Bolshie kill-cults currently running rampant on Uncle György's dime-- choose to make totems of ideology instead of gods or gurus.

Insane, pie-in-the-sky ideology, but ideology all the same.

The fact that Wokeoids are not objectively different than the weird Anabaptists that tried setting up their own autonomous zones in some Mitteleuropean backwater doesn't seem to trouble them, on account of they're idiots who know nothing about history.

Listen, we're just at the beginning of the Cultic Age, so you'd better strap in.

Humans are tribal animals, and with all the old tribal identities out of fashion for most young people, something must inevitably fill the void. I'm sure there are cuties cults with weird metaphysical beliefs now as ever, I just think they're going to mutate into something very, very ugly and awful in the days to come.

Especially given that they seem to have the full weight of Big Tech and what's left of the Hollywood system backing their play.