The Little Girls Who Lived Down the Ghislaine 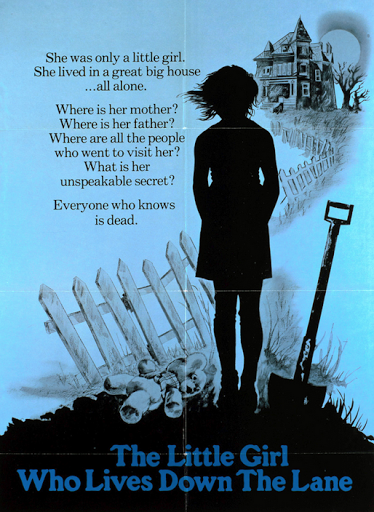 The War in Heaven rages on. It rages on behind the scenes, in the media and in the streets. How much of what we see is real and how much is theatre or glamour is unknowable, but as I've been saying all along, the Epstein/Ghislaine case is a tide-turner. I just can't rightly say who it will wash away. 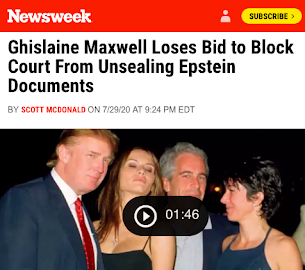 Since this war (like many others) is being fought by backstabbers and turncoats largely loyal only to themselves, it's hard to say who exactly is up or down at any given point, since backstabbers and turncoats will, y'know, stab your back and/or turn on you if they think there's something in it for them.
Witness Newsweek-- usually a solidly-reliable outlet for DNC stenography-- giving Bill Clinton the ol' rib-shiv with the release of the Epstein/Ghislaine court records. 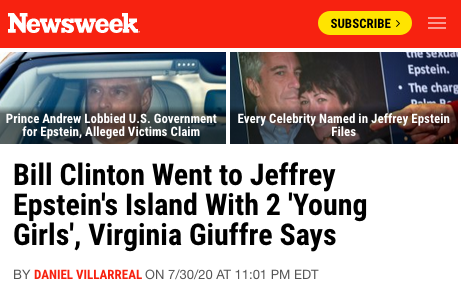 Bill Clinton Went to Jeffrey Epstein's Island With 2 'Young Girls', Virginia Giuffre Says
In recently unsealed court documents involving dead child sex trafficker Jeffrey Epstein and his alleged accomplice Ghislaine Maxwell, a woman named Virginia Giuffre, who publicly accused Epstein of sex trafficking, said that she once saw former Democratic President Bill Clinton on Epstein's island with "two young girls" from New York.
In the questioning by lawyer Jack Scarola, Guiffre was asked, "Do you have any recollection of Jeffrey Epstein's specifically telling you that 'Bill Clinton owes me favors?'"
"Yes, I do," Guiffre answered. "It was a laugh though. He would laugh it off. You know, I remember asking Jeffrey what's Bill Clinton doing here [on Epstein's island] kind of thing, and he laughed it off and said well he owes me favors."
Shortly thereafter, Scarola asked her "Were sexual orgies a regular occurrence on the island at Jeffrey's house?" Guiffre responded, "Yes."
Scarola then asked if she was ever present with Epstein and Clinton on the island.
"Ghislane, Emmy [another girl who was allegedly a regular at Epstein's house], and there was 2 young girls that I could identify. I never really knew them well anyways. It was just 2 girls from New York," Guiffre answered, and said they were all staying in Epstein's house on the island.
In a statement to Newsweek on Friday, a Clinton spokesperson denied the allegation, saying he has "never been to Little St. James Island." The claim had previously been made by Clinton representatives in 2019.
Epstein had multiple ties to Clinton, and Clinton—along with many other big name celebrities—was a repeated passenger on Epstein's private Boeing 727 plane which was nicknamed the "Lolita Express" due to the frequent delivery of apparently underage women to the island of Little Saint James...
In 2015, the now-defunct pop-culture and news website Gawker released the flight logbooks for Epstein's Gulfstream and the Lolita Express 727. Clinton is listed as having taken at least 11 flights on the Lolita Express. 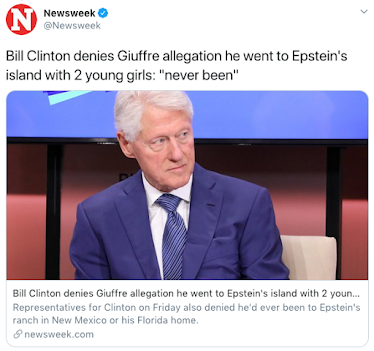 In all fairness, Newsweek did headline Clinton's denials, but seriously; does anyone believe he says about anything anymore? Sure, the Clinton years were pretty happy-go-lucky for a lot of people, but 90s nostalgia will only take you so far.
Hard luck, Bubba. 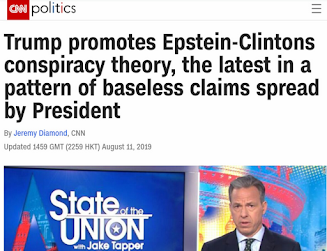 Maybe it's just that Newsweek don't want to get, uh, egg on their faces like DNCNN did. If you know what I mean. 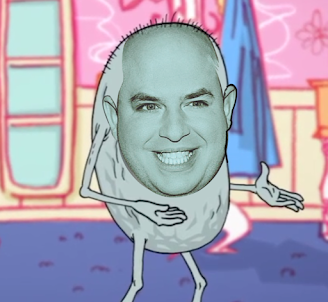 Luckily, CCPNN has an eggman around to lap up the mess. And the blood, and the viscera and anything else spilled on the tiles.
And then there's the list of names-- most of which we've already heard about for some time now-- of celebrities and luminaries known to associate with (read:"was being blackmailed by") Jeffrey Epstein.
Prince Andrew
Alan Dershowitz
Emmy Taylor
Sarah Kellen
Eva Dubin
Glen Dubin
Jean Luc Brunel
Nadia Marcinkova
Bill Clinton
Marvin Minsky
Henry Jarecki
Naomi Campbell
Ron Eppinger
Stephen Hawking
There's at least one prominent name missing from that list -- namely Not-a-Doctor Evil -- but I guess we're talking about a separate timeline. Mind you, I can't really imagine Steven Hawking getting his barely-legal freak on, but who can say anything about anyone anymore? It's a mixed-up, muddled up, shook-up world... 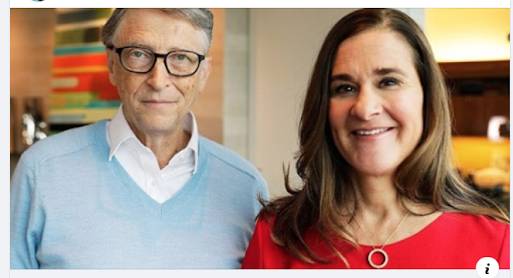 ...except maybe for Melinda, God love her. Who knows anymore? 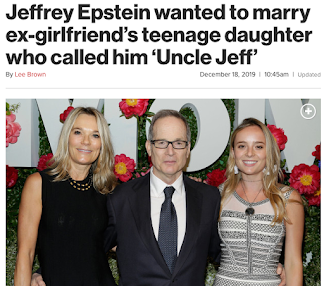 And here's where we get to the part where Epstein is an actual pedophile (or more accurately, a child molester) and not just a jailbaitin' statutory rapist.

The late pedophile openly declared his plans to wed Celina Dubin, the daughter of former Miss Sweden Eva Andersson Dubin, who had dated Epstein for 11 years until the early ’90s, sources told Business Insider.
The pair had developed an “especially close relationship” when Celina was just 12, with “Uncle Jeff” at times having “substituted” for her dad, the Palm Beach Post has previously reported, citing a profile made by Epstein’s lawyers.
Epstein was telling associates in 2014 that if he ever married, it would be to Celina — who was 19 at the time, sources told Business Insider.

And let's not forget the inaction on the part of the Feebs, which is starting to look more and more like complicity, as the picture emerges in a series of revelations by a certain "TechnoFog"... 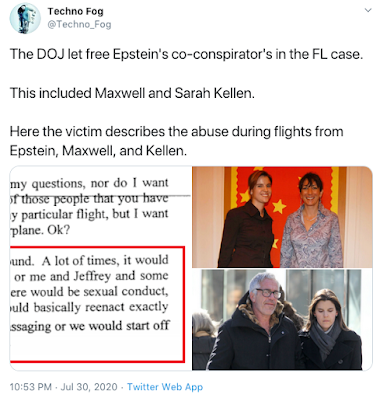 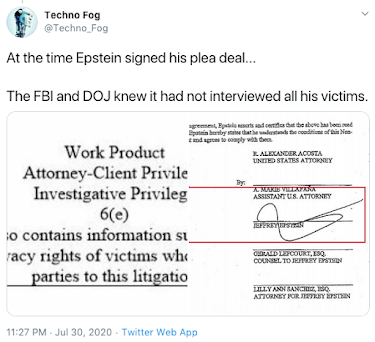 The FBI is most certainly an active combatant in the Heavenly War, or at least elements within the organization are (or were). A lot of them were shown the door so I can't rightly say where they stand on all this currently.
However, I can rightly say that I don't expect any indictments or frogmarches down to Guantanamo or any other such Q-ly fantasies, but I wouldn't be overcome with shock and surprise if we see a number of corner office types there suddenly discover a burning need to spend more time with their families.
The way I see it, I think this war we're hearing the rumblings of has very strict and specific rules of engagement. You don't want to shoot off a torpedo that might eventually reel around and sink your battleship. Everyone's dirty in some way, and I don't think any of them want to be the next one seen on TV in leg-irons. TOSS THEM TO THE WOLVES
So, I have this weird theory. Amazing, I know.
But see, my theory on all this #metoo stuff is that it's ultimately being used as a budget-cutting/deadwood-clearing praxis.
If you look at a lot of the names that have been marched to the #metoo gallows, you're looking at a lot of what some might call alter kockers; has-beens sticking around past their expiration dates and sucking up all the big dollars.
These are generally one-time high mucky-mucks whose abusive behavior was known for decades but was generally tolerated because they were too powerful or too valuable to kick to the curb.
But now that the bottom's falling out of the entertainment industry-- or I should say, the bottom's falling out of the money-laundering networks that have been washing trillions of dollars through the arcane accounting practices of the entertainment racket's accounts payable departments  -- there's less and less reason to pretend that a blazing mediocrity like Ellen DeGeneres is worth the ungodly sums they've been shoveling into her wallet.
Witness this kneecapping from Buzzfeed, of all places. As you know, Buzzfeed is a reliable attack-poodle for the neoliberal kakistocracy, so you can rest easy knowing all kinds of very big names signed off on this hit:

Being asked to join the control room inside The Ellen DeGeneres Show is a coveted spot in Hollywood, but according to dozens of men and women who work behind the scenes, the office is a place where sexual harassment and misconduct by top executive producers runs rampant.
One ex-employee said head writer and executive producer Kevin Leman asked him if he could give him a hand job or perform oral sex in a bathroom at a company party in 2013. Another said they separately saw Leman grab a production assistant’s penis.
Nearly a dozen former employees, who range from longtime, senior-level employees to production assistants, said it was also common for Leman to make sexually explicit comments in the office, like pointing out male colleagues’ bulges in their crotches, or ask them questions like, “Are you a top or a bottom?”
Many of his targets, employees added, were lower-level and younger employees who felt they lacked any power to speak up.
BuzzFeed News spoke to 36 former employees, many of whom independently corroborated incidents of harassment, sexual misconduct, and assault from top producers like Leman. All of the ex-employees, many of whom had voluntarily left the show, asked to remain anonymous out of fear of retribution.
In all, 47 former employees who spoke to BuzzFeed News said Glavin led with intimidation and fear on a daily basis. One former employee said when they turned in their notice, Glavin flipped over a table and chair while screaming.

And here, I would humbly submit, is why the dick-grabbing-free-for-all backstage at The Ellen Show has finally come to a screeching halt.

The Ellen DeGeneres Show is now under internal investigation and DeGeneres has apologized to her show’s staff, Variety has reported. Even some celebs are turning against her, with Everybody Loves Raymond star Brad Garrett tweeting that it was “common knowledge” she treated people “horribly.” The shift in public opinion could be costly to DeGeneres, who is one of the highest-paid celebrities in the world.
DeGeneres was the 12th-highest-paid celebrity in 2020, according to Forbes. She earned $84 million between June 2019 and May 2020, according to the magazine’s estimates.
Much of that money comes from the hefty salary she earns for hosting The Ellen DeGeneres Show. In 2017, Variety estimated she was paid $50 million a year for her work on the long-running daytime show.

Ellen's show is produced by Warner Brothers, a subsidiary of AT&T. Both companies are perilously insolvent. From Forbes:

Topline: Already heavy with debt before the pandemic, AT&T announced a new $5.5 billion loan and said it would scale down its operations to generate cash, a sign that the media giant could initiate layoffs.

The new loan adds to AT&T’s massive debt burden of $163 billion, which was racked up through its purchases of DirecTV in 2015 and Time Warner (now WarnerMedia) in 2018.
With $12 billion in cash on hand, AT&T said it would be able to generate more cash by “sizing our operations to economic activity”; oftentimes, reduction in operations translates to layoffs.
Key background: AT&T’s $85 billion acquisition of Time Warner, and its legacy brands like Warner Bros. and HBO, has made it one of the big players in Hollywood. But with movie theaters closed, productions on hold and advertising revenue cratering, this is a very bad time to be in show business.

Warners is desperately scrambling to sell off everything that isn't racking in reliably-huge profits, so it's no wonder at all Ellen's bloated salary is next on the chopping block. 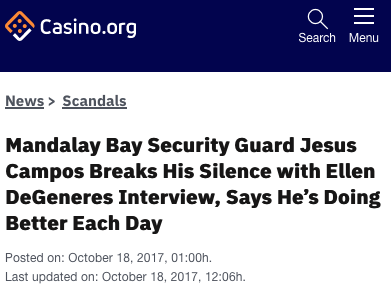 How soon they forget, eh? Ellen's never shirked from shilling for the Man, but now she's getting herself a taste of how hugely-indebted conglomerates reward loyalty.
Hard luck, El. 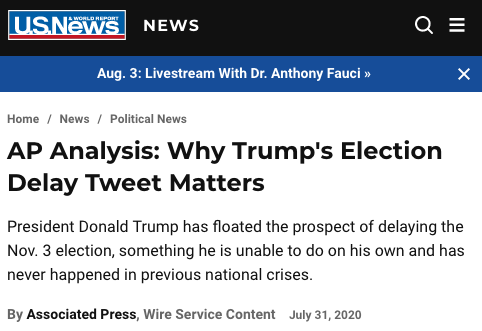 And can I call 'em or what? This is what they call a "trial balloon" in politics. Look for others to start floating some more.
POSTSCRIPT 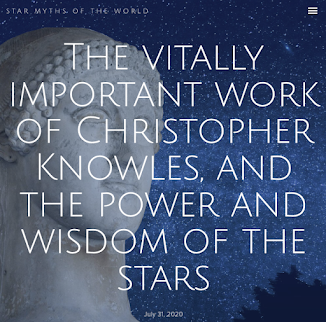 Our pal Dave Mathisen was gracious enough to apply his stellar expertise to my clumsy cosmic fumbling, which you can check out here. And be sure to check out his new book here. DWM has been unpacking cosmic mythology for quite some time, and now takes a whole new look at it.
Come join the other stargazers in the comments when you're finished.
at July 31, 2020