My God is Full of Stars: Karma Coma Comet Chameleon 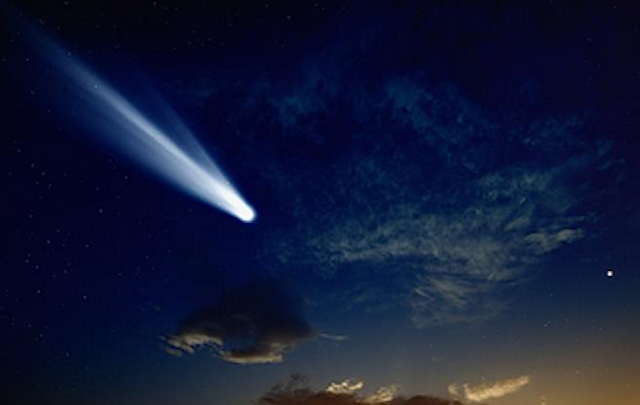 The action shows no signs of letting up out there. Or letting up up there, for that matter.

Next up on the docket are some wonders and portents in the Heavens, the kind our ancestors weren't overly fond of. So gird your loins for our next journey to the stars... 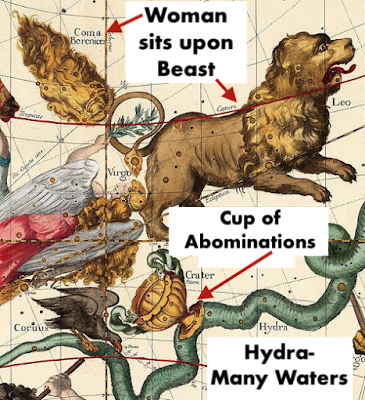 In the last post we looked at the Scarlet Woman AKA the Whore of Babylon AKA Mystery Babylon the Great AKA The Mother of Harlots and Abominations and determined that she has a symbolic connection to Coma Berenices, which was then either an asterism or a newly-minted constellation, depending on what timeline you choose to follow.

Coma was named for a real Egyptian queen, who according to legend sacrificed her famous locks to Aphrodite-Ishtar-Hathor-Astarte-Atargatis-Qetesh-whomever in order to ensure victory for her husband in battle.

You can easily see why she'd be identified with the Scarlet Woman by early Christians.

The alignments are pretty much self-evident, as you see here, and line right up to the verses in Revelation 17. But me being me, I began to think of another connection in relation to Coma.. 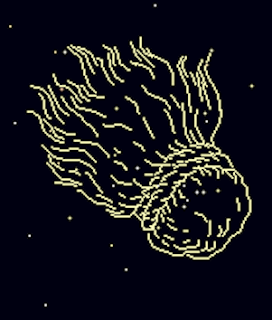 ...and that is its clear connection to comets... 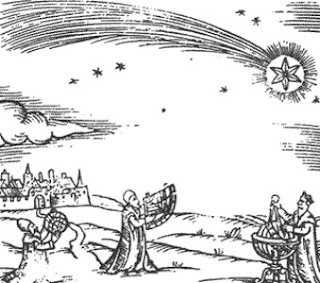 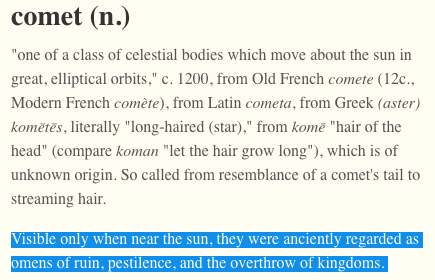 Both coma and comet derive from the same root, referring to "hair of the head."

So what might this have to tell us about what's going on in the night skies today?

Well, quite a lot, actually. 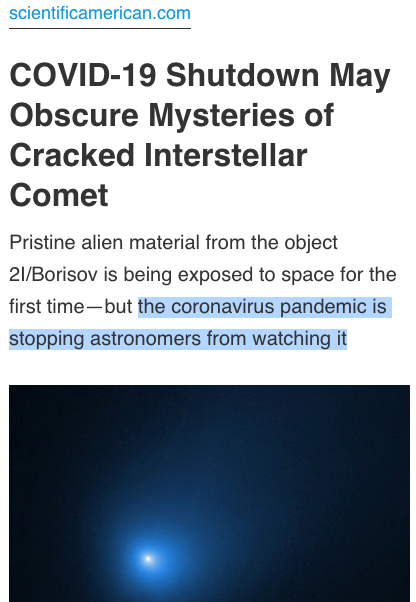 Turns out TwinTenTwinTen is shaping up to be a banner year for comets, as we apparently have Twins headed our way, 2I/Borisov and the equally boringly-named ATLAS.

And as you see here, the coronavirus lockdowns are impeding scientists from studying the objects, which clearly shows astronomers have the same shitty luck that I do. 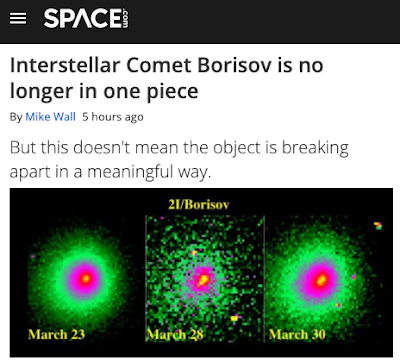 Worse still, Borisov is said to be breaking up into pieces as it heads towards the Sun. I'm sure there's some deeper symbolic connection here but it's not coming to mind right now.

Give me some more time to work on it, and drop any suggestions in the comments.

Borisov is reportedly the second interstellar comet in the past Twin years, following on the heals of 'Oumuamua, "the Visitor from Vega" regular Secret Sun readers should be very sick of familiar with by now.

And as dumb luck would have it, Borisov is said to be coming from the same general region- at least as we see it-- as Oumuamua... 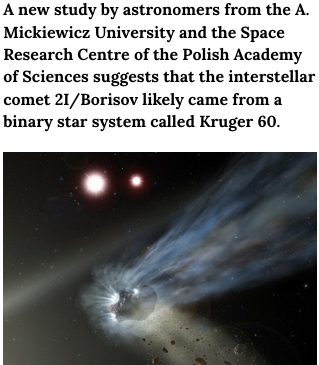 ...that being Cepheus, the constellation representing God on the Throne of the North.

This is particularly important given our decoding of the astronomical symbolism of Revelation 17 (though we still have a lot of work to do to unlock its deeper meanings and connections), given that Borisov and ATLAS will both fly through a lot of familiar territory up there by the time this is all over.

The fact that Borisov entered the Solar System from the direction of Cassiopeia (Mystery Babylon upon her throne) and Perseus (symbolizing the Kings of the Earth) is giving me a brain itch like you wouldn't believe.

Especially given the fact that Borisov is also reportedly breaking apart as well. Again, give me some time; I'm sure there's a heavy sync there as well. 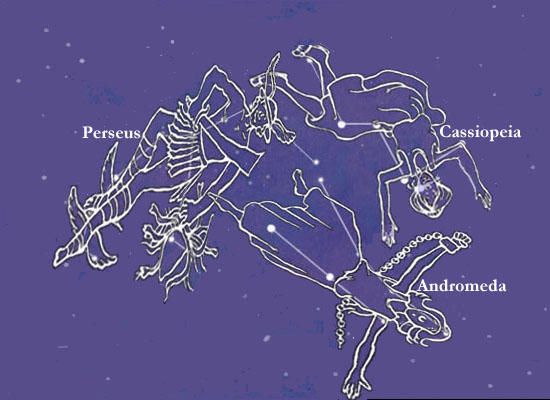 As you can see here, Cassiopea is the Queen on her throne seen as falling in the night sky and Andromeda is our Mystery Babylon fallen.

Note: save this diagram for future reference. 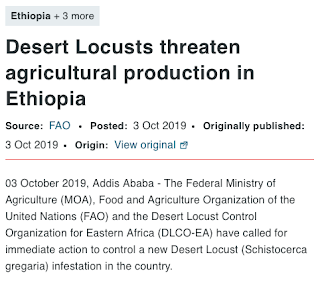 Given our decoding of the Locusts of Revelation 9 and the fact that Cassiopeia and Andromeda were Queen and Princess of Ethiopia respectively, this too has my brain itching like it just fell into a poison ivy patch.

Well, the current locust crisis sweeping across East Africa and into Asia -- which many have called "biblical"-- is believed to have begun in Ethiopia. 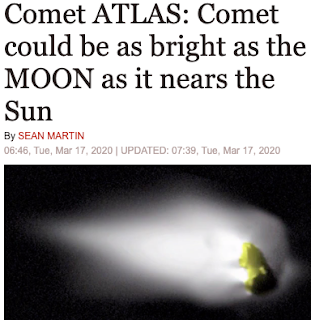 Now ATLAS enters the picture, and is predicted to rival the Moon in brightness by the time it goes into perihelion.

Remember that ATLAS is a tortured acronym referencing the Titan Atlas, who was said to hold the world on his shoulders. Not sure if that means anything or not, but the way things have been going it probably does. 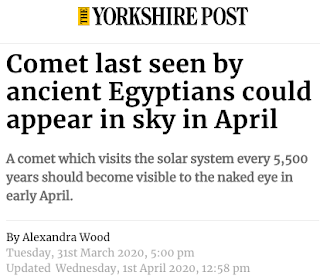 ATLAS is said -- for some reason that I can't seem to find any corroboration for -- to have been seen by the Ancient Egyptians.

But it's also said to be a fragment of the Great Comet of 1844. And you might want to have a glance at Wikipedia to see exactly what an earth-shaking year that turned out to be. 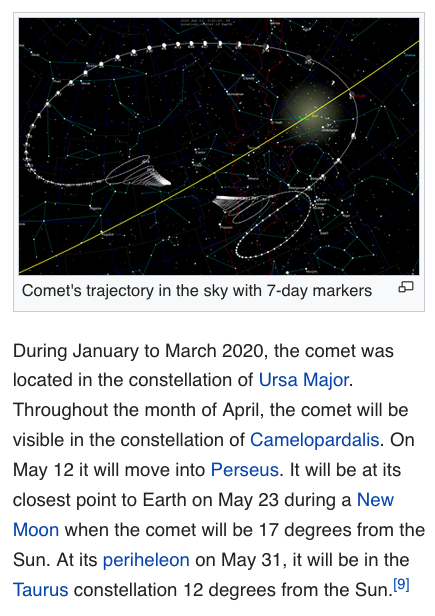 As we speak ATLAS is said to be visible in the constellation of Camelopardalis, the Giraffe (or Leopard Camel, as the name implies).

This is also highly synchful to our discussion, especially as it pertains to Revelation 17... 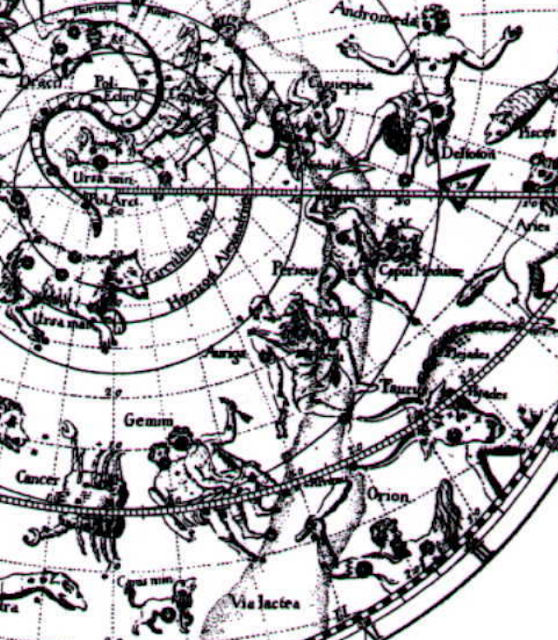 ...since neither Camelopardalis nor its neighbor Lynx existed at the time of the writing of Revelation. The stars are too faint to see with the naked eye, so it was seen as stellar wilderness.

Given that that same wilderness connects Cassiopeia and Cancer across the reaches of the night sky, it's clear that this is the same wilderness Mystery Babylon traveled to sit by the Beast (Leo-Cancer-Hydra's Head) and the Many Waters (Hydra proper). It's most likely her 'desolation' as well. 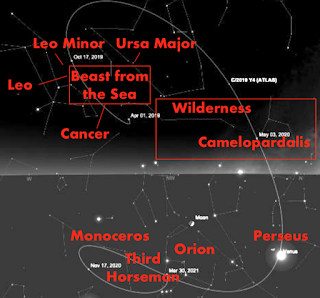 So ATLAS is making a similar journey, through the Beasts of Revelation 17 and 13 (which are describing the same general area of the Heavens), through the stellar Wilderness, past the Kings of the Earth (Perseus) and towards the Third Horseman.

The fact that it spend the first three months of this year-- when apparently all Hell began to break loose-- in the constellation of Ursa Major is also blowing my mind. I think it will do the same for any attentive readers of this blog as well. 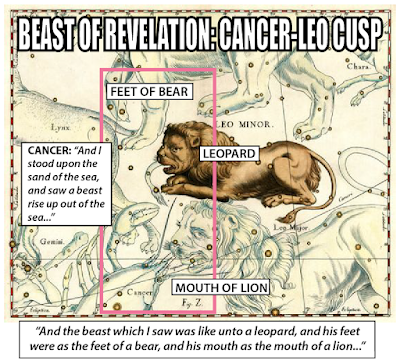 Remember that the Beast of Revelation 13 syncs up with the conjunction of Cancer (coming up out of the sea from Hydra), the Mouth of Leo, Leo Minor (an asterism at the time of the writing of Revelation) and the feet of Ursa Major.

So, remembering that Corona-- the Crown AKA the Garland -- was THE story of those three months (as it is now), let's take another look at that passage and see how it corresponds to the conditions of the stars now:

2 And the beast which I saw was like unto a leopard, and his feet were as the feet of a bear, and his mouth as the mouth of a lion: and the dragon gave him his power, and his seat, and great authority.

3 And I saw one of his heads as it were wounded to death; and his deadly wound was healed: and all the world wondered after the beast.

What might that famous head wound correspond to today? Anything in particular? 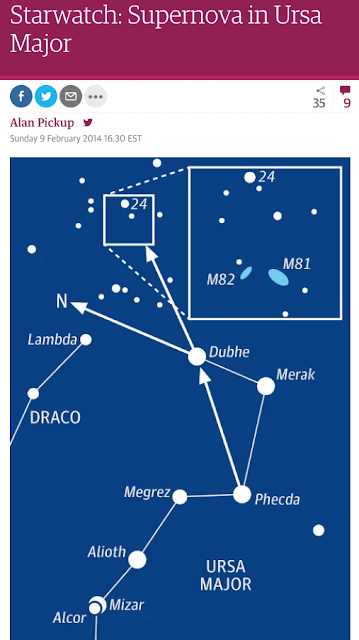 How about the Supernova in Ursa Major?

The supernova which lies above the Great Bear's head.

Meaning it's a head wound.

To the Beast. His head.

A head wound. Which, um, seems to have healed. 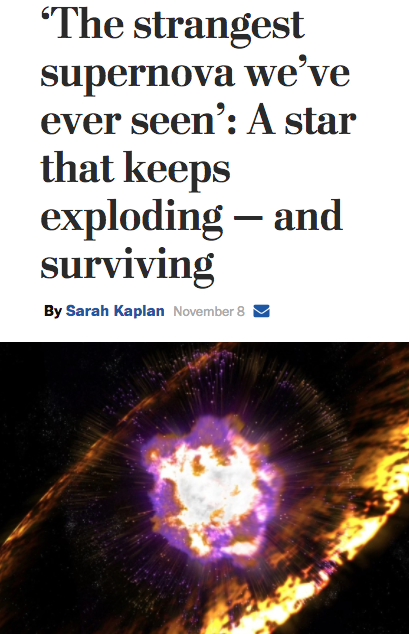 The wound to the Beast's head that has all the world-- well, the astronomical world-- wondering, since nothing like it has ever been seen before.

Remember that Ursa Major lies below Draco, the Dragon which gives the Beast its power, as we see in Revelation 13:4. 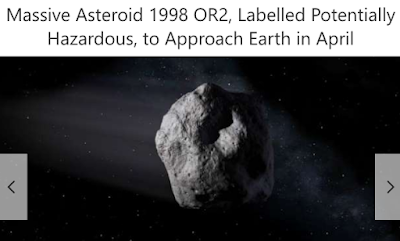 As if all that weren't enough, there's said to be a massive asteroid coming our way, though we're being given assurances it will pass by at a safe distance.

But let me just note for the record that 1998=666 x 3. And let me also remind you these assurances come from NASA, an entity not renowned for truthfulness.

Anyway, this latest cosmic interloper has given some folks in deeper corners of the Conspirasphere the willies, and has inspired some theorizing that this is the real reason for the worldwide lockdown. Some more religious types claim this may be the notorious Wormwood of Revelation 8.

7 The first angel sounded, and there followed hail and fire mingled with blood, and they were cast upon the earth: and the third part of trees was burnt up, and all green grass was burnt up.

8 And the second angel sounded, and as it were a great mountain burning with fire was cast into the sea: and the third part of the sea became blood;

10 And the third angel sounded, and there fell a great star from heaven, burning as it were a lamp, and it fell upon the third part of the rivers, and upon the fountains of waters;

11 And the name of the star is called Wormwood: and the third part of the waters became wormwood; and many men died of the waters, because they were made bitter. 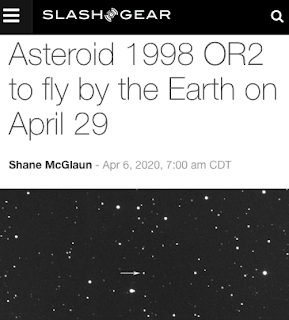 Now, the asteroid is said to be passing by on April 29, a day I'm sure will most likely come and go like any other. Just the law of averages. 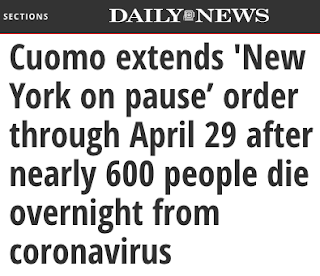 But let me just point out that Nipple-Clamps Cuomo is lifting the lockdown that very same day, which is admittedly a random date to do so.

Again, just sayin'. Make of that what you will.

Personally, I'm not getting too worked up about all this for Twin reasons.

First, is that I'm old enough to have survived more prophesied apocalypses than I care to count. I'm sure a lot of you have too.

Second, there's absolute fuck-all to do about it if it is true.

Live and love for today. Tomorrow is never guaranteed.


PS: Strong suggestion - buy The Chaos Protocols by Gordon White, study it and take its lessons to heart. Our flight's probably going to get a bit bumpy.