40 years ago this summer I stayed up until all hours of the night reading The Stand by Stephen King. I was riveted, couldn't put it down (fourteen years-old seems to be the perfect age for Stephen King). It was based on what was a pretty familiar premise at the time: a weaponized pathogen ("Captain Trips," named in honor of Jerry Garcia) escapes from a government lab and wipes out most of the Earth's population.

Let's just hope that's not what we're seeing here because I really don't want anyone to ever call Stephen King a "prophet." Ever.

Now, let me be perfectly clear: I'm not panicking yet over the Coronavirus epidemic in China.

But I do think it's a very, very weird story and feels a bit... well, let's just it seems to make a weird kind of sense.

Maybe this is why; remember the hoopla about "Disease X?" We talked a bit about that at the time. If you don't remember it, this article from Spitfire List will help refresh your memories:

Equally curious is the fact that Johns Hopkins Center for Health Security, the World Economic Forum and the Bill and Melinda Gates Foundation sponsored a novel coronavirus pandemic preparedness exercise October 18, 2019, in New York called “Event 201.“The simulation predicted a global death toll of 65 million people within a span of 18 months.

As reported by Forbes December 12, 2019:“The experts ran through a carefully designed, detailed simulation of a new (fictional) viral illness called CAPS or coronavirus acute pulmonary syndrome. This was modeled after previous epidemics like SARS and MERS.”

Sounds exactly like NCIP, doesn’t it? Yet the new coronavirus responsible for NCIP had not yet been identified at the time of the simulation, and the first case wasn’t reported until two months later.

Forbes also refers to the fictional pandemic as “Disease X” — the same designation used by The Telegraph in its January 24, 2020, video report, “Could This Coronavirus be Disease X?“ which suggests that media outlets were briefed and there was coordination ahead of time with regard to use of certain keywords and catchphrases in news reports and opinion articles.

Let's just remember this is the same foundation that reportedly created a super-species of mosquitoes in Brazil while apparently attempting to drastically reduce the population in that country.

The population of mosquitoes, I mean.

What did you think I meant?

We've been hearing rumors of biowarfare or Captain Trips-type blowback ever since the contagion first made the news. Despite the best efforts of the ChiCom Party and their blackmail subjects shills allies in the American media, these stories have broken out of the InfoWars-type ghettoes and into the mainstream news, particularly among China's neighbors.

For instance, this news story from India Today seems more than a little pissed-off and suggestive. Maybe even accusatory. I can't say I blame them, if there's any truth to the rumors. Countries like India will bear the brunt of this thing if --God forbid-- it becomes a pandemic.

US Senator Tom Cotton (R-Ark) has taken up the cudgel himself, making increasingly explicit statements about the virus and its possible origin at a biological research laboratory in Wuhan. Weirdly, this has opened Cotton up to all kinds of vitriolic attacks from pretty much everyone inside the mainstream media.

LOL, just kidding. It's not weird at all.

Is it because it's an election year and Cotton's a member of the wrong party? Is it because he broke now-required protocol and isn't accusing Russia? Why would he go out on a limb like this, calling this epidemic, "worse than Chernobyl?" 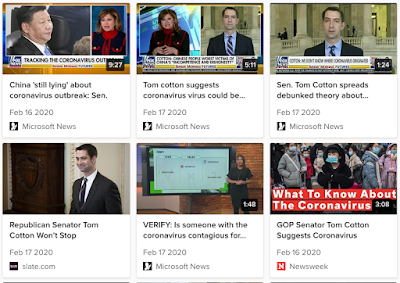 Or could it be that the media is trying to cover up any liability or involvement amongst the Communist Party and/or the Gates Foundation, or any other parties? How should I know?

But I do know that trust in the media has never been lower, so I'm not entirely sure why they're going so hard in the paint on this issue. It can't exactly help their credibility now that their various "-Gates" have been ostensibly deflated.

Can anyone see any reasons why there's such a drive to slam this Senator on this? Give me your thoughts in the comments. 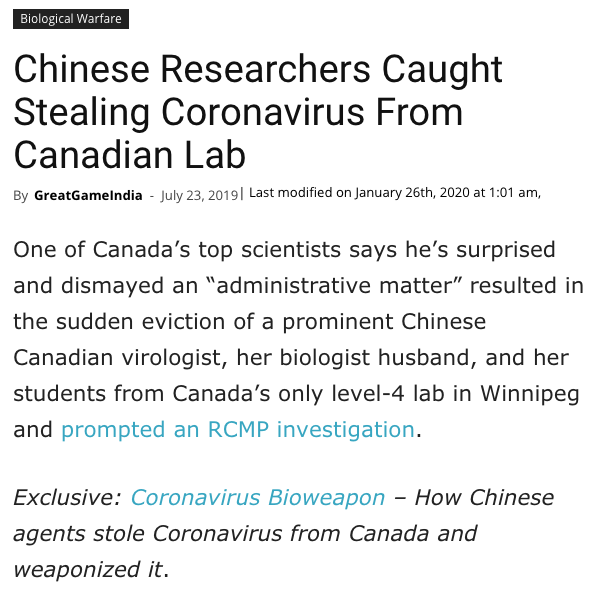 And how does this weird story-- that seems to have suddenly vanished into the ether-- play into all of this?

Listen, what I know about viruses and epidemiology couldn't fill a Kleenex. But even with a stuffy nose, I know the faint whiff of bullshit when it comes a'wafting. So anyone following this story is welcome to bring us all up to speed.

I guess I shouldn't be too surprised, seeing how deep the diving was getting. But now I wonder if a post on a topic some of you might recall from a year or two back might have caused some problems.

But the fact is, that given the Sibyl's obvious track record, "Five Ten Fiftyfold" is in fact the most terrifying song ever recorded. Even just a cursory glance at the lyrics points to that:

Why does that unsettle me?  Because of this: 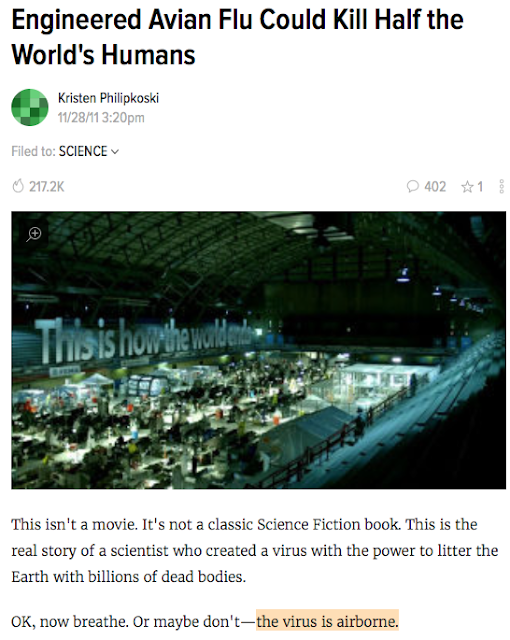 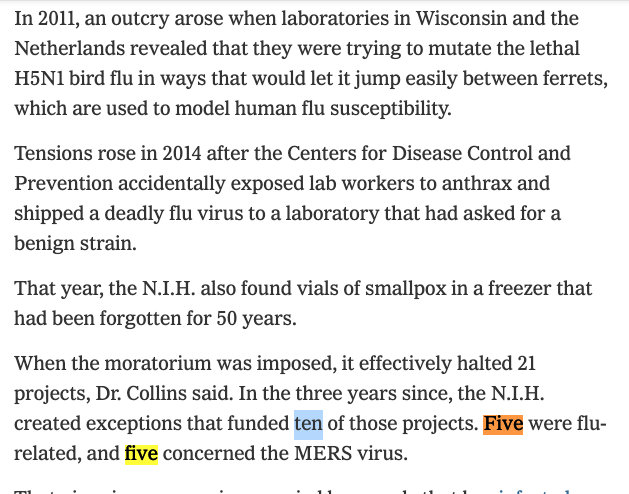 So we have the "halved it in half" from the clickbait headline, and a more specific "five" and ten" from a more in-depth article from The New York Times. Plus, the "gushing gust wind" telling us this thing is airborne.

And, of course, all the wheezing and sneezing.

Note too that MERS is also a coronavirus. 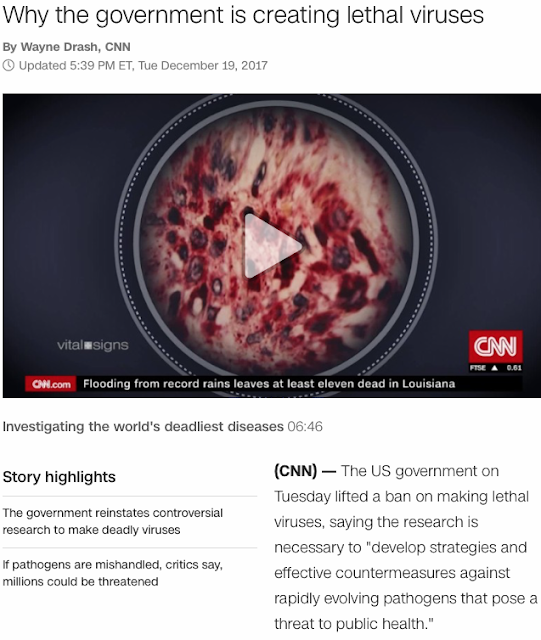 This was the headline that first got my attention, and may well turn out to be the wellspring of our current dilemma.

"However, for the past decade there have been red flags raised in the scientific community about biosecurity breaches in high containment biological labs in the U.S. . . . The federal moratorium on lethal virus experiments in the U.S. was lifted at the end of December 2017,38 even though researchers announced in 2015 they had created a lab-created hybrid coronavirus similar to that of SARS that was capable of infecting both human airway cells and mice...”

And another verse in "Five-Ten Fiftyfold" seems a bit too prescient for me in this new context: 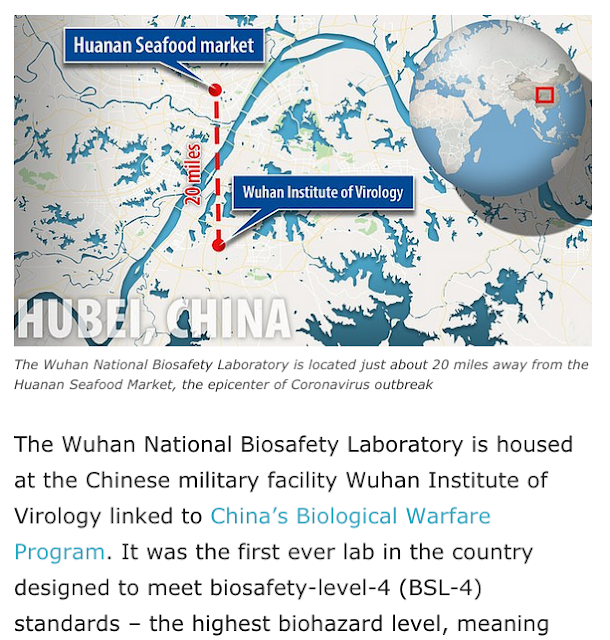 Why do I say so? Because Wuhan proper is "just up north" from the Level 4 Virology center that a growing number of people seem to believe is the ultimate source of this new contagion.

Also make note that China is also dealing with a new bird flu epidemic, and that the H5N1 virus that the 2011 fearporn headline was screaming about was first identified on farm in Scotland, literally "just up north" from where "Five-Ten Fiftyfold" was recorded in 1983.

It wouldn't actually emerge as a danger for humans until the mid-90s, a decade later.

BONUS FACTOIDS: Bruce Springsteen's "Jungleland" was King's original inspiration for The Stand. The song "The Stand" by The Alarm was in turn inspired by the book. Well, more than 'inspired' --it's pretty much about it. 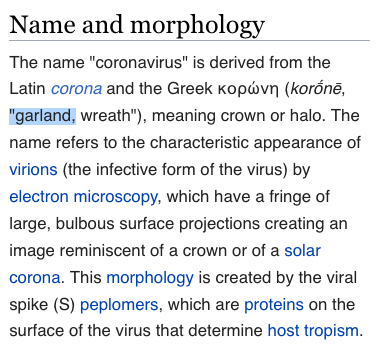 And speaking of advanced particle Fraysics, "Corona" is yet another synonym for "Garland."

Maybe that's why a sub-blog about a reclusive 80s New Wave singer might be of particular interest to someone. Or maybe not. Who can really say these days, right? Not me. 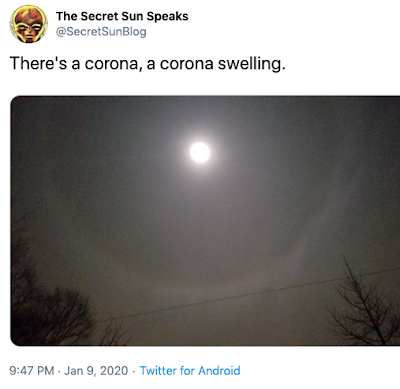 Anyway, let's all hope this little light show wasn't a portent. Always stay calm and focused, but also be prepared to act quickly and decisively if it turns out it was.


Apply that same approach to your comments...