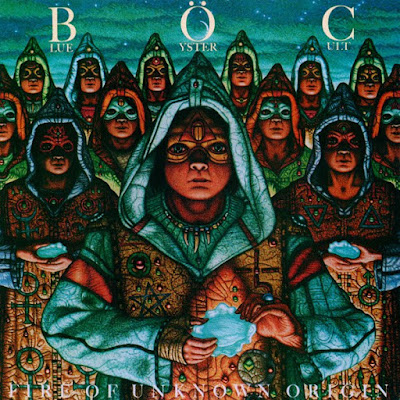 Question: What do the Simon Necromicon, Son of Sam, the Cotton Club murders, punk rock and proto-thrash, comic book occultism, the Process Church of the Final Judgment, UFOs and the AIDS epidemic all have in common?

Answer: They all played a part in the dark, druggy scene that took hold of New York City in the grim, lost decade that bridged the long, post-Sixties hangover and the go-go Eighties personified by Donald Trump.

And floating like a wraith through it all was one Samuel "Sandy" Pearlman, the madman visionary behind the Blue Oyster Cult.

Pearlman also played pivotal roles in the careers of Black Sabbath (whom he brought back from commercial oblivion by pairing with Ronnie James Dio) and The Clash (whom he taught to play and record like a real rock band), as well as the burgeoning 80s Indie Rock scene, before slinking back into the shadows. Or academia. Same difference. 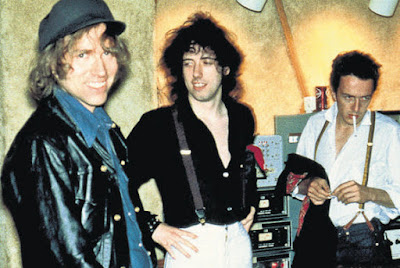 Pearlman with The Clash

Pearlman was a mass of contradictions: a New York Jew who collected Nazi memorabilia and pored over Wehrmacht military strategy, a brilliant polymath and technical wizard who was also obsessed with the occult and the mystical, a credentialed academic who traveled in the least intellectually-stimulating musical circles available at the time.

Pearlman's magnum opus was Imaginos, a classic 70s concept album that had the misfortune of being released in the 80s. An ersatz Blue Oyster Cult project, Imaginos cost so much and sold so poorly that it crashed both Pearlman and BOC's careers in evil.

But maybe Imaginos was just a little too ahead of its time:


Although often referred to as a dream, the concept behind Imaginos is what Pearlman described as "an interpretation of history – an explanation for the onset of World War I, or a revelation of the occult origins of it", which he crafted on elements of mythology, sociology, alchemy, science and occultism. This "combination of horror story and fairy tale" cites historical facts and characters, and is filled with literate references to ancient civilizations in a conspiracy theory of epic proportions, the subject of which is the manipulation of the course of human history.

Central to this story are Les Invisibles (The Invisible Ones), a group of seven beings worshipped by the natives of Mexico and Haiti prior to the arrival of Spanish colonists in the 16th century, identified by some fans as the Loa of the Voodoo religion. The nature of Les Invisibles is left unclear, though it is hinted that they may be extraterrestrials, or beings akin to the Great Old Ones in the works of H. P. Lovecraft. 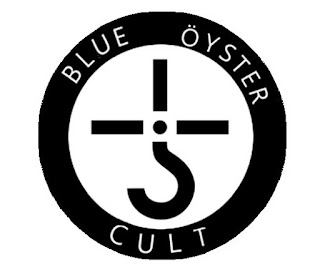 An interpretation of the lyrics of the song "Astronomy" by some fans suggests that the star Sirius is of particular astrological significance to Les Invisibles, with clues identifying it as their place of origin; it is during the so-called Dog Days of August, when Sirius is in conjunction with the Sun that their influence over mankind is at its apex.

By subtly influencing the minds of men, the beings are said to be "playing with our history as if it's a game", affecting events in world history over the course of centuries. For the three centuries after European discovery of the New World, this game plays out as the desire for gold is used to transform Spain into the dominant power in Europe, only to be usurped by England in the 17th century and later, through technology, by other nations ("Les Invisibles").

After years of planning, Steve Recluse and I finally delve into the very, very weird history of Pearlman and Blue Oyster Cult, a history that folds in a whole host of occult and parapolitical topics and events Secret Sunners will be very familiar with.

You don't have to be a fan of the band-- hell, you don't even need to have heard of them-- to ride this rocket of drugs, devilry and doom-rock. 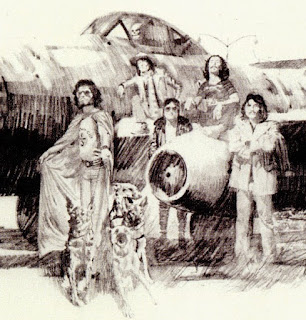 Recluse and I also try to decode some of the clues and hints Pearlman seemed to drop about the Process, who were slinking through the same outer-borough shadows Blue Oyster Cult were at the time.

Like why is Eric Bloom looking for all the world like a Process recruiter, replete with cape and German Shepherds, while the band pose against a Luftwaffe fighter-plane?

Why are those same dogs drawn as being killed on the back cover of the album?

Why is the BOC logo so similar to the Process logo?

Did Pearlman come across some real evil during his occult dabblings, as can often happen to the unwary? Was he trying to tell tales out of school or was he down with DeGrimston?

Is there a connection between Spectres -- BOC's follow-up to their monster-selling Agents of Fortune, with its should-have-been-a-smash "Going Through the Motions" -- being buried by Columbia, with David Berkowitz's arrest four months prior to the album's release?

How did a guy who made so much money for the record industry in the 70s find himself at the margins of it in the 80s?