I Got Them Ol' Cosmic Cold War Blues Again, Mama.

I'm trying to get some leftover business squared away for good today, so indulge me while I drop some slightly-stale news with some fresh synchliness on your heads. Then open the floor so all you fine folks can share the latest information, gossip and mind-blowing revelations with one another in the comments.

We've covered this UAP story going back to the crazy days and nights of October 2017, but it's worth revisiting considering how big a deal this is becoming. I can't quite scope out the angle here, either this is the ongoing "soft disclosure" or some batshit psyop for the benefit of anyone out studying on fucking with the US Navy.

But do note it is the Navy, as Secret Sun aficianados have come to expect, and do note that things have been getting awfully Cold War II lately, only more insane and delirium tremens-y.

I'm very interested to find out what you all think of this monkeyshines and tomfoolery and where exactly you reckon it's all headed.

Of course, Secret Sun regulars realize that "Elizondo" and "David Fravor" is yet another in-joke amongst whatever grand poobahs might be orchestrating this big roll-out. And high initiates should realize that "Frodis Caper" guest-star Rip Taylor died after the Elizondobeth Davidson Frasvor business got aired on Rogan.

Because I am always right about everything, as insane as I fully and freely acknowledge this all is. That's kind of my point, actually.

Bonus Ritualism: Commandabeth Davidson Frasvor reportedly lives right near Mystery Hill, aka "America's Stonehenge." Because there is literally nowhere else he could live. 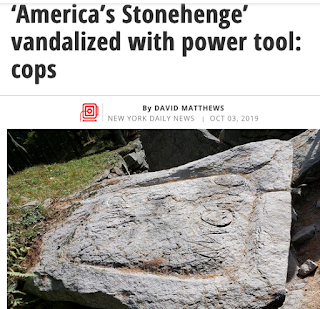 UPDATE: Our Man in the Field Moses reminded me that America's Stonehenge was recently-- and weirdly-- vandalized with what looks to me like "Q" graffiti (WWG1WGA).


This is all feeling very 1983 for reasons I can't quite fathom. It's just a vibe. But those of you old enough -- and blessed enough-- to have experienced that epochal year remember it was the height of Cold War tensions and we nearly launched all them birdies a few times.

Which is to say that we were often a whisker away from what some might call the "Apocalypse" in 1983.

And you know what that means.

Stop givin' me stinkeye. I don't make this crap up. 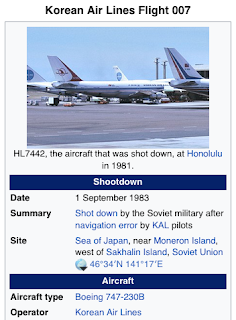 Things got really dicey on September 1, when the Soviets shot down a Korean jetliner, Flight 007 (Twin 0's), which counted a prominent anti-Communist Congressman among the casualties. It crashed into the Sea of Japan. 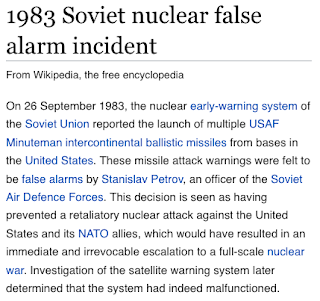 Later that month on the 26th, there was the so-called "Soviet Nuclear False Alarm Incident," when a Russian early warning system mistakenly reported an incoming missile attack. That same day a Soyuz rocket exploded at the Baikonur Cosmodrome. 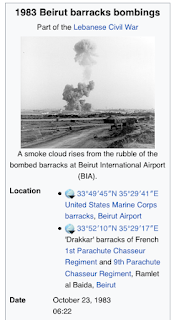 On October 23rd there were devastating Twin bombings of US and French military barracks in Beirut. Early in the year there was the horrific US Embassy bombing in that same city. 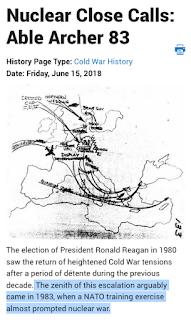 There was another DEFCON-1 type near incident in November 7, when NATO forces launched the Abel Archer (Twin A's) operation.

Back in Lebanon, a US A-6 Twinjet with twin Navy flyers was shot down on the morning of December 4th. One of the men, Mark Lange (roughly the same name as "DeLonge"), died after ejecting. Another was freed thanks to the efforts of Jesse Jackson (Twin J's) who had recently announced a run for the Presidency.

Got all that? Good. Let's run the Frasyncs...

However, the single's catalog date is the all-important 4/4 (April 4), which was the very same day the Space Shuttle (Twin S's) Challenger had its maiden flight. (The Pink Opaque was released Twin weeks before the Challenger exploded over the coastal waters of Florida).

Remember that Heaven Upside Down or Las Vegas had a direct link to the Challenger, since Garlands O'Kelpie (code name: "Stephen Paddock") worked at Martin Marietta (Twin M's) at the time, makers of the infamous O Ring.

"Peppermint Pig" was named for a traditional Christmas treat made in Saratoga Springs, NY (Twin S's). 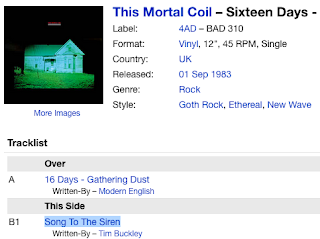 The very same day KAL Flight 007 was shot down by the Russians, This Mortal Coil released the "Sixteen Days" single, whose B-side was the now-legendary "Song to the Siren." The Sibyl prophesied on both sides.

"I always thought there was a prophecy of death about that song." -- Sinead O'Connor

Weirdly enough, the day before "Song to the Siren" was first premiered by Tim Buckley on "The Frodis Caper" episode of The Monkees (with Rip Taylor), an Aer Lingus Vickers Viscount (Twin V's) crashed into the ocean off the coast of Ireland.

The Congressman aboard 007? Lawrence McDonald. "Lawrence" being synonymous with "Garlands." McDonald had attended Davidson College. 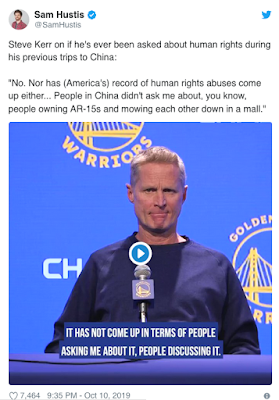 Speaking of Cold War Redux, US Basketball Team Person Steve Kerr said whatever the fuck that got someone else saying whatever the fuck. I don't care other than Kerr was from a family within the Miles Copeland orbit and was born and raised in Beirut.

The only thing I know about the Warriors is their colors are that very specific Blue and Gold readers know all about by now. 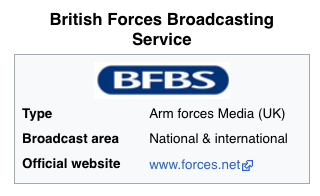 The father of future Cocteau Twin Simon Raymonde had been a producer for the BFBS in the Sixties. Remember that Raymonde attended the exclusive Charterhouse School, where Genesis was formed, featuring future Sibyl-servants Peter Gabriel and Steve Hackett. 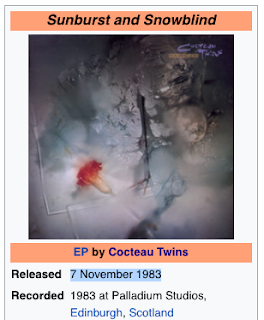 "Sugar Hiccup" would also be featured on Sunburst and Snowblind (Twin S's), which was released on the very same day as the infamous Abel-Archer "close-call" war-games. Go figure.

"Sugar Hiccup" had earlier been premiered on the BBC. On the day after the Soviet false-alarm event, in fact.

The Cocteaux did a live appearance on the BBC's Saturday Night just a couple of hours before the shoot-down of the USN Twinjet in Lebanon, and performed Twin songs from Sunburst and Snowblind. 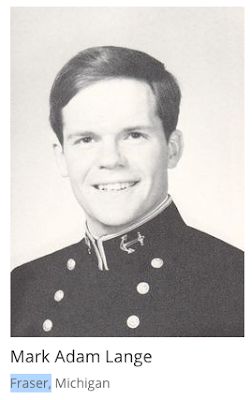 Fravor isn't a real word, it's just a corruption of "Fraser." 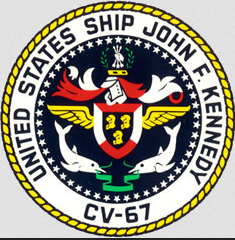 Lange's Twinjet took off from the USS John F Kennedy, whose seal features Garlands and Delphi. Not sure if those are Fraser's Dolphins. Probably.

No, it never, ever ends. I realize it's difficult. Please just try to get used to it.