Stan Lee & The Twilight of the Immortals


One of the big recent stories was Stan Lee passing away at the enviable age of 95. I can't properly size up the effect Stan had on my own life and certainly not the influence he had on the culture at large. He, more than anyone, is responsible for the development of the superhero as icon and the rise of fan culture today.

Stan's genius was to make all the lonely, marginalized outcast kids out there in the pre-Internet, pre-con culture days feel like they were part of an Invisible College of a sort, or a secret society.
His creative contributions to the medium and the superhero genre are constantly being whittled away at by revisionists but to do so is to be oblivious to the need to package, edit and go out and sell the ideas that creative types-- generally introverts, if not actual misanthropes-- conjure up.

Sure, the bulk of the actual creative work in developing the Marvel Universe was done by Jack Kirby, Steve Ditko, and to an extent not generally appreciated by fans, Roy Thomas. But Kirby and Ditko were outcasts themselves and ground out pages for Stan because no other major shop would hire them. (Stan was a big-hearted guy who got into a heap of trouble for buying pages from creators he'd never actually publish and doing so because he didn't want to see talent starve).

The alchemical elixir of those early Marvel years obviously continues to resonate today. But despite what some wags want to think, Stan most definitely was the linchpin. Kirby and Ditko could create entire universes without breaking a sweat, but neither could write recognizably human dialogue and neither seemed able to differentiate a good idea from a mediocre one. Their post-Marvel careers in the 70s pretty much attest to this.

..............
Stan was kind enough to blurb Our Gods Wear Spandex and I think that made all the difference in selling that book to the normies. But I only had actual contact with him once. It was at San Diego, 2003 or 2004, and Stan was zipping around the lobby like the bundle of kinetic energy he was. I saw him and said, "All right, Stan!" and he beamed. Then as he walked past I yelled out "Hey Stan, Excelsior!" He turned around and his face lit up like a streetlight and he hollered, "EXCELSIOR!" and waved his fist in the air..................

Stan spent a lot of time in the past two or three decades being screwed and manipulated by thieves and sharks. It's really heartbreaking. There was also some intimations of elder abuse in his final days. It really speaks to a realization from my youth working as a janitor in nursing homes that this world is illusory and corrupt and that even the giants face terrible endings to their life stories. Good onsite training for a budding Gnostic. 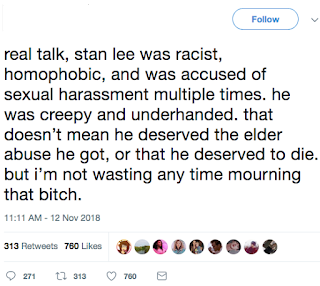 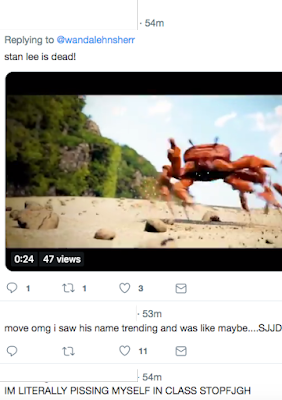 ............
There was a LOT of this insane, hateful ranting on Twitter following Stan's death. This is yet more proof that a demonic spirit stalks the planet and is increasingly dominant within the Borgsong. This is cultural and civilization cancer, my friends, if not in fact slow-motion civilizational suicide. And it's just the tip of an enormous iceberg.

We're talking about a sub-generation of pampered sociopaths lacking in even the most basic social skills or decorum and utterly lacking in human empathy. And I have no doubt at all that most, if not all, of them are incapable of performing any kind of productive work at all and may in fact never be despite the historically-unprecedented advantages they enjoy.

............
These are people who literally destroy everything they touch and I'm highly skeptical that free and open societies will be able to survive them.

Food for thought, brothers and sisters.

............
Another giant left this Vale of Tears and that's Roy Clark. Clark was one of these artistic Renaissance men this country no longer seems capable of producing anymore. He was a singer, actor, comedian and talkshow host, but most of all he was a guitar god of the very highest order.

Clark could play anything-- country, bluegrass, jazz, classical, flamenco-- and make it look like the easiest thing in the world.

Clark was of that generation that picked and fretted every note they played, and did so on strings the size of piano wires. He didn't need hammer-ons, pull-offs or fancy effects to hurl a blizzard of notes at you. And you can be damn sure that melody was always king. 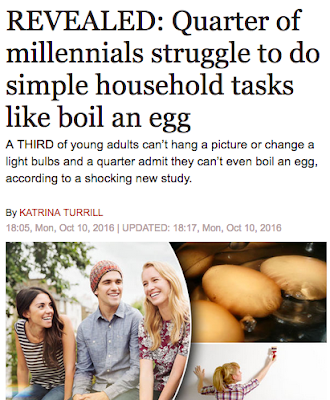 Human hands are amazing things, especially when tethered to properly-functioning brains. I remember I made Timothy Leary very angry at me when I pointed out that there was a danger that people--especially young people-- would become unable to perform the simplest of tasks in the real world if they spent too much time in the virtual one. And lo and behold, that sad prophecy has now come to pass.

Complex social systems are highly interdependent structures, often with built-in redundancies. But like machines or the human body itself you can only remove or destroy so many component parts before the entire edifice begins to break down.

Sorry to be such a buzzkill, but I'm just calling it like I see it.


Jack's problems with Marvel really had to do with owner Martin Goodman but he also came to resent the attention the furiously charismatic Stan was getting in the media. Kirby did put finally his foot down and insisted that Stan not be given sole writer credit (the credits would eventually read "By Stan Lee and Jack Kirby" on the work they did together) but Jack also resented his grim Gnostic philosophy being papered over in the dialogue stages by Stan's sunny Humanism.

But that's what kept the kids coming back for more: Stan was not only a great editor (Kirby was the most prodigious idea machine in the history of pop culture, but was incapable of distinguishing a good idea from a great one) and a great wordsmith (it was Stan's writing that first made me fall in love with the power of language) but was able to create an imaginary clubhouse-- a Marvel Universe-- in which lonely, isolated kids could commune every month with Smilin' Stan and Jolly Jack and the rest of the Bullpen. Kirby went out of his way to nurture relationships with fans in person, but had no idea to do what Stan did on paper.

Just how much Stan did for Jack was made clear when Kirby went back to DC in 1971. Kirby was not up to the task of editing himself and most of the books he created there failed. With the added pressures having to edit and dialog his own books, Jack's art lost a lot of the detail, dimension and power it had in the 60s, a situation not helped by cut-rate inkers who had none of the skill or finesse fans took for granted at Marvel.

Jack's prestige and reputation in the fan press suffered badly. No longer "King Kirby" like in the glory days of the Marvel Bullpen-- fans now called him "Jack the Hack."

Stan would come to Jack's rescue again. With relations badly strained at DC, Stan lured Jack back over to Marvel. But this time, he did so over the objections of many of his editors. Kirby was seen as a has-been, and Stan's offer to let Jack write his own books was seen as a big mistake. And in truth, Jack's sales weren't much better at Marvel than they were at DC.

Towards the end of his 70s, the strain was definitely showing- Jack's writing and drawing were the worst of his career. Stan came to Jack's rescue a third time and got him out of comics and landed him a much better gig with the animation department, allowing Jack to start a new career that gave his life a very happy final act.

And let me just say this, based on my own experience: creating something is the easy part. Packaging it and getting out there and selling it to a disinterested public is a whole other level entirely.

Never for a moment discount how much Stan Lee brought to the table and how hard he worked to make the Marvel Age a reality.