Do you come here OFTEN?


I don't exactly understand the mechanics of spellcraft and I'm not sure anyone else does either. Is it simply the power of suggestion? Is it a kind of mind control? Is it somehow based in non-supernatural but super-normal psychic powers?

I don't know and to be honest, I don't much care. I don't really worry too much the exact science of microprocessors when I use the Internet. I'm just interested in the results.

Kind of the same when it comes to demons. Is it all just a mass delusion? Is it purely a psychic phenomenon? Is it some kind of mind control as well? I don't know that either but I do know that when you dump enough evil on a populace it tends to have an effect, whether it's evil actions, evil symbols or evil narratives.

A lot of folks have been asking me about this new Sabrina series and to be honest I've been avoiding it. I'm very much familiar with the comic series it's based on and a post on it has been sitting in the queue for months now.
.................
All I can say for now is that it's very much a sign of the times; a cute and harmless cartoon (and later TV series) retooled with the blackest of black magic, blood magic, human sacrifice and all the rest of it.
.................
I'm just going to go on the record and predict it's probably not going to have a salutary effect on the collective consciousness, given how much evil and mental illness is bubbling beneath the surface already.
.................
I spent a lot of time talking about these types of things on the Occulture podcast. Now that my brain is nearly totally free from a ten-year bit in a pharmaceutical prison cell I'm happy to say that I've finally begun to get my interviewee mojo back and am able to once again approach these things with a relatively clear mind and a minimum of brain fog and annoying verbal tics.

Do check out more Occulturey goodness here and think about dropping a few ducats in the Occulture Patreon. 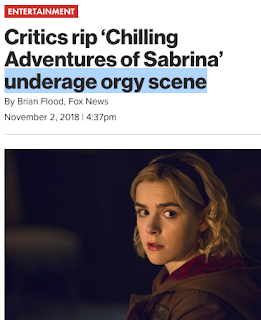