Shortly after high noon on the 17th, Donald Trump addressed the media over the firestorm raised by the intelligence community over the Helsinki summit, ostensibly to walk back statements he made at the Helsinki summit. Not long after Trump began speaking, the lights in the conference room went out, "accidentally" turned off by Chief of Staff John Kelly.

You won't believe what happened next! 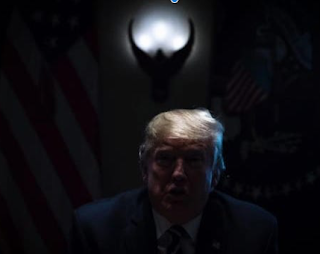 Why, the news cameras just happened to catch this rather iconic image there, a money-shot that professional photographers with teams of assistants would plan for weeks and work all day to capture.

Just one of those little serendipitous moments, just a wacky stroke of happenstance that, golly-gee, just happened to pop up by accident.

The Washington Post then amplified the effect by running that little sizzle reel of Trump orb shots. I'm sure they think they were making Trump look foolish but the subliminal message it seems to convey is that Trump is a badass Bond-villain alpha-male with dark supernatural forces on his side. The MSM is actually a lot more clueless about these things than you might think, particularly the dying newspaper sector.

I mean, just look at that trident of orb-y bulbs looking all sentient and flying-triangle-like, and cap that symbolism with what looks like Lucifer or the Phoenix or Semjaza or whoever radiating light upon Trump's shiny blond combover. 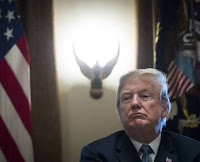 Oh look, it's Lyra! For the zillionth time!

Plus you have the 17th and the sun at its apex and all the rest of it. Plus, it was the All-Important 544th day of the Trump presidency.

And considering this all went down on the centennial of the Bolshevik murders of the Romanovs, you can't help but wonder if this is some kind of "avenging angel" signal, especially considering the top ringleader of the anti-Trump forces is/was a registered Communist.
Either way, you gotta admit it's highly-effective magic. Because the MSM, bolstered by neocon Republicans, were effectively painting Trump as weak, indecisive and subservient after the summit and this imagery gives the impression--bolstered by the other footage-- that Trump actually is an agent. Only not for the Kremlin but for the Angel of Death. In other words, it kinda makes Trump look like a boss.

I couldn't help but notice that the temperature in Washington and the media cooled rather suddenly following this little photo-op. Twitter went from trending hysterical hashtags like "#TREASONSUMMIT" and "ZOMGTRUMPISPUTINSGLORYHOLEBITCH" to pushing innocuous items about bunnies and flowers and avocado toast or whatever the fuck.

So I do begin wonder if this was in fact a message to the Brennan/Clinton camp, coded in language that you and I are not in fact privy to. Since my motto is never pay attention to what is said but rather to what is done, I kinda get the impression something sub rosa was indeed being conveyed here by Trump and his shadowy junta of generals. Call me crazy, everyone else does. But it's just what my gut is telling me. 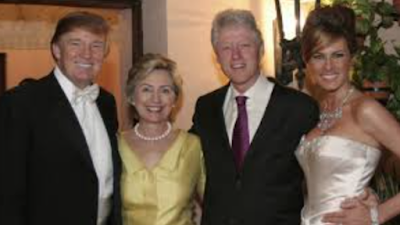 Just in case you're wondering, it's still my personal belief that everything going on in Washington is the same exact game of thrones that follows the death of any long-standing, domineering and overweening emperor who leaves no clear successor.  I haven't seen anything to change my mind on that. A tale as old as time, a song as old as rhyme.

The Emperor in this case being-- of course-- David Rockefeller.

And it does seem like things in this country really started getting particularly nasty the past few years, presumably when the Daddy David Deathwatch began.

I'm willing to bet, given the clear connections, that Trump was a princeling in Rockefeller's court in pretty much the same way the Clintons were. Don't forget that Trump (a registered Democrat until 2010 or so) taped The Apprentice in the Belly of the Grand Architect Beast (AKA 30 Rock) for more than a decade.

So it's my stupid opinion that the bitter nastiness you're seeing among the various factions of the elite is the same kind of slapfight you see when cousins tussle over a rich uncle's will. It really has got nothing to do with you and me. Take that for whatever it's worth.

And as much as I hate to admit it, I'm afraid the battle here ultimately boils down to what exact flavor of dystopian police state we'll end up with and which exact occulted cabal will run it.

And sometimes, in the dark radiance of the false dawn, I do wonder if the battle is ultimately over who'll be the proconsuls and viceroys for the Borgcube Cylons while they put the final pieces of the Skynet Matrix into place.

Sorry for the mixed metaphor there. Geek roots and all.