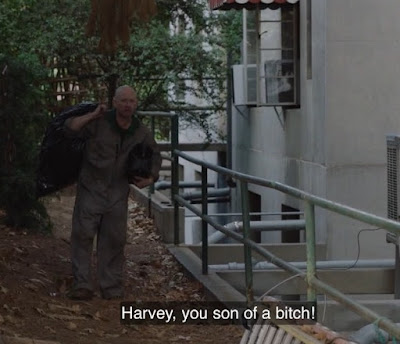 Twin Peaks: The Return- Episode One

Over the past several weeks I've been looking at the events that followed in the wake of Chris Cornell's death and the revival of Twin Peaks, which occurred within days of each other. This threw me down the old rabbit hole of the Siren archetype, which I believe is rising out there in all the different streams and spheres of consciousness.


This archetype ties back to the old love-and-war goddesses of the ancient world, a lineage tracing back to Sumer and forward to goddesses like Ishtar, Venus and Atargatis, the so-called Syrian Goddess and first mermaid of legend, nearly all of whom had shepherd-boy consorts who died and were reborn.

In the midst of this, the Sibyl- who arguably began this memetic unveiling with her 1983 cover of Tim Buckley's "Song to the Siren"- emerged from her self-imposed exile to give a talk at Royal Albert Hall on July 23rd. This date- made famous by Robert Anton Wilson- is often identified with the rising of Sirius (Sirius, Syria, Siren) and the coming of the Nile floods.

I said, "floods."
Incidentally, the myth of the Nile floods in Ancient Egypt had it that they were caused by the tears Isis wept for Osiris when he was drowned. I hope anyone who's been following the blog lately will put all that together on their own.

One thing I'd been telling the Facebook group all along is that something very big and very bad was coming, something that would be identified with the Siren in some way. I couldn't quite put my finger on it, I just knew that's the way this kind of thing always goes.

And sure enough, we have seen the devastating effects wrought by Hurricane Harvey in the Gulf of Mexico, specifically in the Houston metropolitan area.

Living in an area that bore an outsized helping of the brunt of Superstorm Sandy, I feel the pain of the great people of Houston and pray for their recovery from the devastating floods that have beset their city. 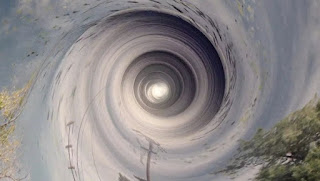 Now, Twin Peaks: The Return has been telling a sprawling and all-emcompassing tale of the nature of evil and the veil between realities. A month before Harvey made landfall we saw this vortex open up the skies. 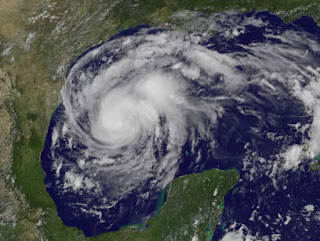 And most of you will probably recognize the strong resemblance of that vortex to an aerial view of a hurricance, as in this satellite shot of Harvey. Huh. 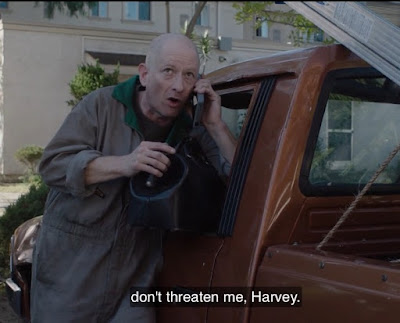 We see the vortex first open in Episode Eleven over the decapitated body of Ruth Davenport, whose head was discovered atop Major Garland Briggs' body in Davenport's apartment in Episode One. The superintendent of that building engages in an angry exchange in Episode One with a "Harvey," whom we never meet. 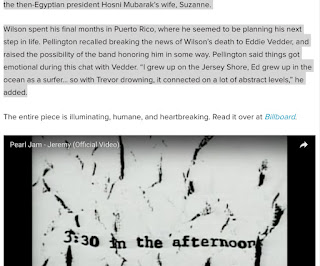 I also wrote about the drowning death of Trevor Wilson, the young actor turned globetrotter who played Jeremy in the famous Pearl Jam music video of the same name. I had a feeling it was part of something, I just couldn't say exactly what. 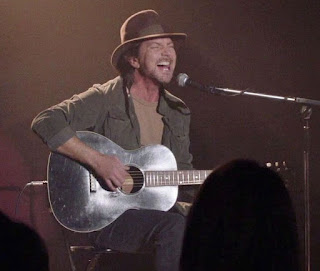 And sure enough, Pearl Jam's Eddie Vedder appeared on the episode of Twin Peaks that aired while Harvey was pummeling East Texas and environs. He performed under his birth name, which I found kind of interesting. 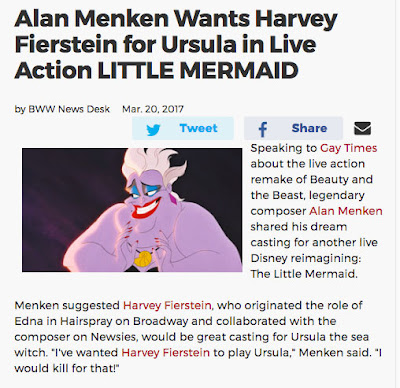 Siren omens had been building up over the past few months. Unfortunately, these are the kinds of emanations you can't pin down until after the fact. There were a number of stories in the early Spring, about the potential casting of Harvey Fierstein as the sea-witch Ursula for the pending live-action production of The Little Mermaid.

For those of you who don't remember, Ursula conjured up a great storm, complete with spinning vortex. 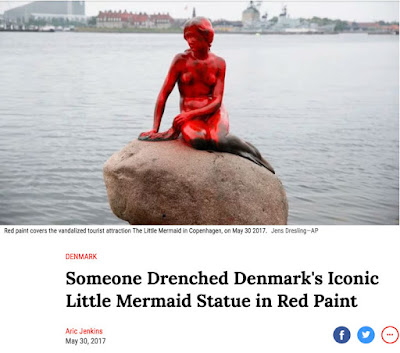 Also in the spring we saw the icon Copenhagen Little Mermaid covered in blood-red paint. Concurrent with this event was the discovery of the headless body of a prominent female journalist named Kim Wall in that same city, foreshadowing the Ruth Davenport subplot in Twin Peaks. Wall's headless body had washed up on a beach. 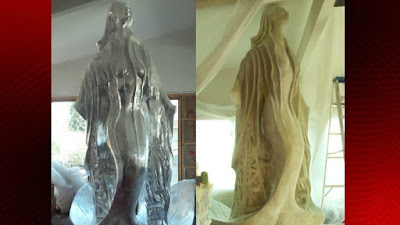 In late July we heard of a mermaid statue being dedicated to those who have lost their lives in the Gulf of Mexico.

PORT FOURCHON, La. (AP) — Before the year is over, a 16-foot-tall statue of a mermaid rising from the water will stand on Louisiana's waterfront as a memorial to all who have died at sea.

Cindie Roussel, whose son was lost diving in the Gulf of Mexico in 2011, worked with families of some of the men who died when the Deepwater Horizon oil rig caught fire in 2010 to commission The Lady of the Gulf Seaman's Memorial. 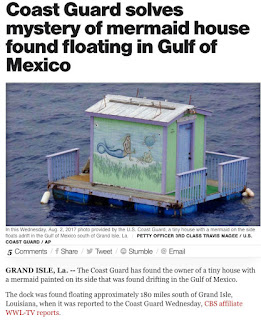 Then there was this incredibly bizarre story in early August about the "Mermaid House" that had somehow come loose of its moorings in Grand Isle, Louisiana and gone floating around the Gulf of Mexico. 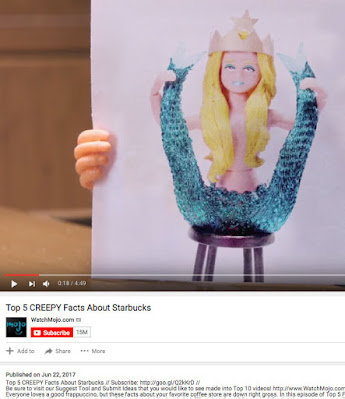 Weird Starbucks stories also began popping up, like this clickbait vid on YouTube that went live in late July. 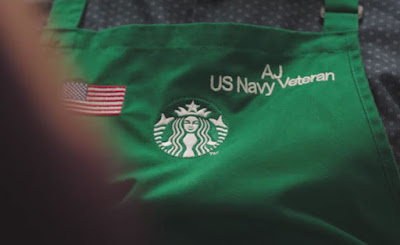 A few days before Harvey made landfall a public service announcement sponsored by Starbucks began running on YouTube. In it we see the conjunction of military and corporate iconography and arguably a covert use of the Sirius heiroglyph. 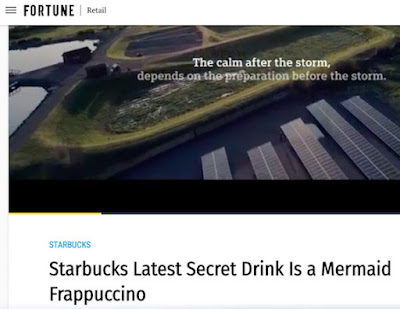 As Harvey battered Texas this weird story ran on the Fortune magazine website. Note the "calm before the storm" advertisement. How about that? 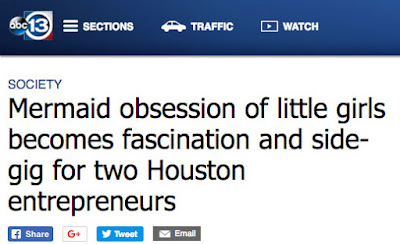 Throughout the summer weird puff pieces about mermaids began running in the Houston media. Like this... 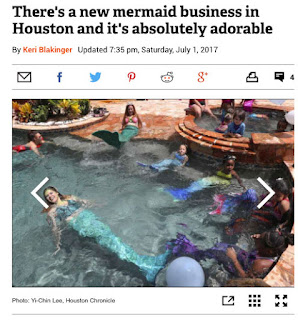 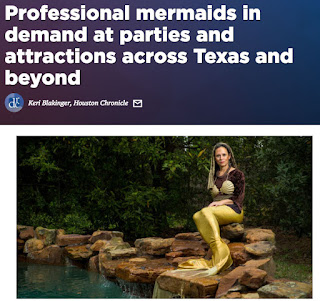 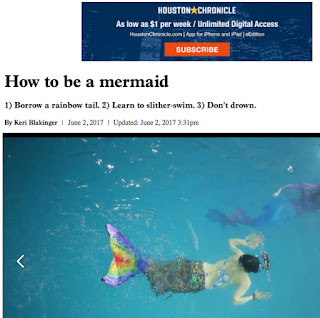 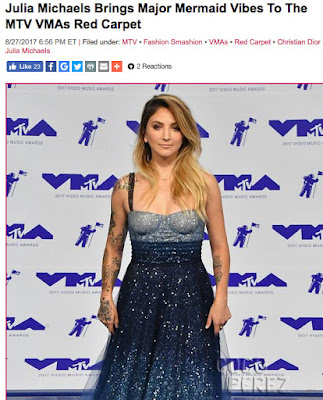 There were also odd references to mermaids in puff pieces covering last Sunday's MTV VMAs. Like this... 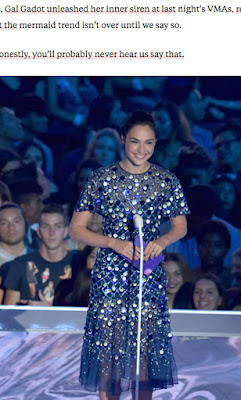 ... and this, featuring Gal Gadot ("Wave River"), star of this summer's biggest hit, Wonder Wom-Inanna. Which I still need to post on, incidentally. 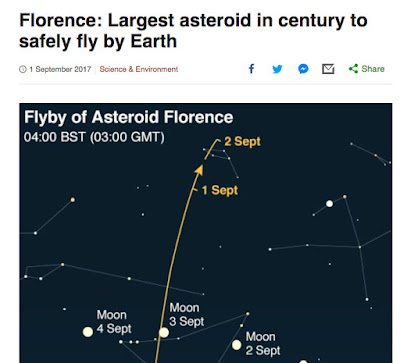 Then we have this story from NASA (of course), about today's fly-by of the Asteroid called Florence. 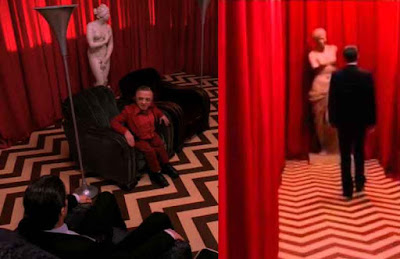 Incidentally, the Black Lodge in Twin Peaks features two famous statues of Venus, the De Medici and the De Milo. The Medici and Botticelli's world-famous Birth of Venus are both housed in Florence. 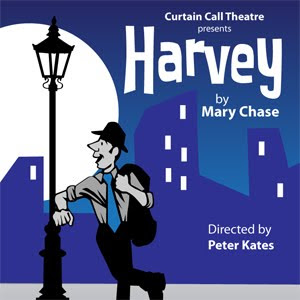 And sure enough, Braintree gets in the act. Curtain Call Theatre, which played a major role in my early life, is performing Harvey as its next production.