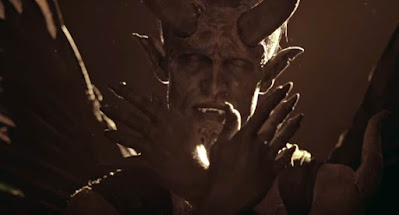 The Satanic Temple might seem like a minor story to some, despite their extensive connections to MKULTRA and their somewhat unsettling interest in young children.
But they don't exist in a vacuum- there's an entire body of evidence linking mind control, child abuse and Satanic ritualism together, even if there's also an entire body of unfounded rumor and hysterical nonsense linking them together as well.
But we also have the example of MKOFTEN, the program allegedly designed to weaponize the occult that grew out of MKULTRA, a program which itself victimized untold thousands of children, some of whom were the most vulnerable and marginalized members of our society.

But given the timeline (MKULTRA was winding down as MKOFTEN was ramping up in 1966), it's not out of the realm of speculation that it was MKOFTEN that used young children as test audiences for Night of the Living Dead, an exercise in mass trauma conditioning that the legendary film critic Roger Ebert unwittingly reported on firsthand.

So what would Ebert make of "LA (read: Liber AL) Devotee?" What would he make of a culture so degraded, so despoiled that such an artifact could be presented to the public as entertainment? Let's look at as many of the highlights as I can stomach.

The video opens with a very young girl walking through a field with a worried look upon her face. 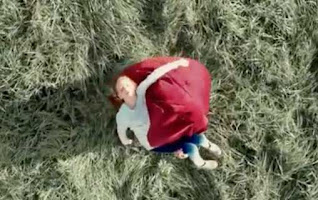 As it happens she's right to be worried as she's knocked unconscious and abducted by a robed assailant. 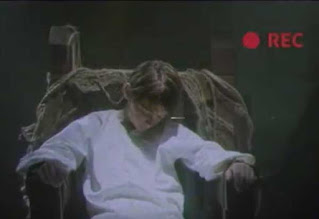 She's not the focus of the ersatz snuff film we're about to be subjected to though.

A young boy, surrounded menacingly by Satanic cultists, is. He's confronted by Brandon Urie, the last remaining member of Panic at the Disco, and the two trade the song's insipid lyrics, but the clear inference is that the boy is screaming out in fear and pain and Urie is his captor and tormentor.

Because the actor (Noah Schapp) featured in the video is the same boy who played Will Byers reviewers have tried to excuse it as a Stranger Things tribute or some such flaming bullshit. But there's nothing fantastical or sci-fi about any of this.

The aesthetic here is 100% snuff film, from start to finish. Where the hell is that coming from?

Would you like some cheese pizza with your pop?

The entire video has a distinctly MKULTRA/MKOFTEN vibe, with images of dead animals, of wild animals, of knife-wielding cultists, and so on. This is not some mindless heavy metal video; this is a highly-rendered piece of work created either by someone intimately familiar with satanic cultism (and CIA mind control) or someone who's really done their homework.

Which begs the question why.

At one point the cultists attach electrodes to the boy's head and he's subjected to the electroshock torture that CIA MKULTRA doctors inflicted on hundreds of children in orphanages and hospitals.

We see the abducted girl, clearly brainwashed a la Patty Hearst or a Manson Family member, give the boy something to drink. This is the last we'll see of her. Note her blank expression and cultic garb. 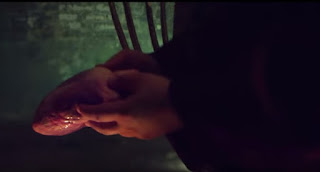 We won't see her again but we will see a freshly-removed lung, roughly the size of one that might belong to the abducted girl. You don't need to be a film school grad to grasp what they're trying to tell us here. 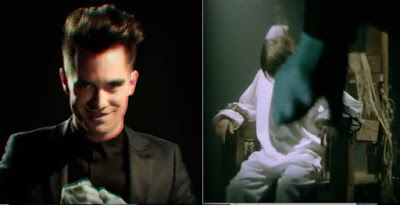 The video ends with Urie flashing a psychotic grin and rubbing his hands together, which we see are clad in latex gloves. We're given no indication whatsoever that he's meant to be in character or is playing a role.

He clearly identifies himself with/as the abductor/torturer/killer. Nice.

The last shot is of the singer approaching the unconscious boy, with the clear inference being that he is now going to finish him off.

All of this is absolutely artless. It barely registers as entertainment.

Only a total imbecile would assign any kind of aesthetic meaning to any of this. This is nothing but the methodical, highly-studied acting-out of the abduction, sadistic torture and ritual murder of children. Which we seem to be seeing a lot of lately.

Correct me if I wrong, but it certainly looks like the unvarnished glorification and celebration of Satanic serial murder, brought to you by a top rock band and by video makers who also produce commercials for major corporate clients.

So what exactly is the purpose behind it all? What are these fantastically-privileged degenerate sociopaths actually trying to tell us? 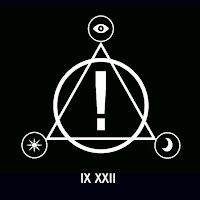 We see this symbol, etched into the grass at the beginning of "LA Devotee." On the face of it, it's reasonably mild occult-chic stuff, but connected to an abduction and ostensible murder and dismemberment of a child it takes on a bit more sinister character.

But "LA Devotee" may in fact be the third part of a triptych. In 2013, Panic at the Disco released a video for "This is Gospel," which seems to make reference to the singer Brendon Urie leaving the Mormon Church. We see him in typical Mormon missionary garb, struggling against ropes, which may represent the ties that bind him to his old life. 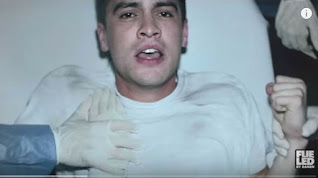 At the end of the video we see him on an operating table, attended to by doctors. The story is picked up again in a 2015 video for "Emperor's New Clothes", in which the singer dies, briefly ascends to Heaven and is then dumped into Hell. 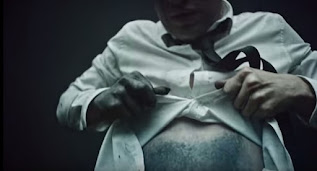 He then undergoes a transformation into a demon as the song plays, removing his Mormon missionary clothing as his body morphs into that of a traditional demon. 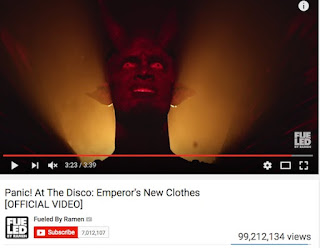 The song ends with Urie fully transformed into a demon and smiling as a shadowy figure-- presumably Satan-- approaches. Is this a statement of intent here? If not, why?

Note that the video has received almost 100 million views.

So this isn't some obscure indy rock band who's gleefully pumping out the MKOFTEN Satanic programming agenda to the world, intentionally or not. 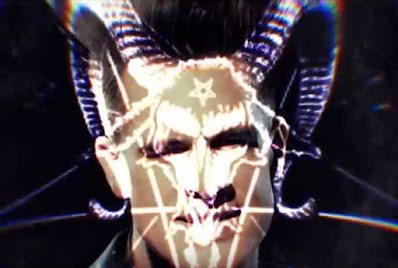 In this context, this shot from "LA Devotee" is worth noting, in which the Eliphas Levi head of Baphomet is superimposed onto the head of Urie. This establishes the new video as a continuation of the story we saw first in "This is Gospel" and continued in "Emperor's New Clothes."

If so, what exact inference are we to draw then, given that the setting and presentation segues from entirely symbolic to entirely real?

The question then becomes where are these ideas coming from and who the hell thought this was a good idea for a pop video? Someone is feeding this kind of imagery into the mainstream and more besides. Instead of lapsing into the kneejerk defense posture people should begin to ask themselves who's orchestrating all of this and what are they really after?

It may not be freedom of expression and all the rest of those fine and noble ideals, fa la la. It may in fact be anything but. 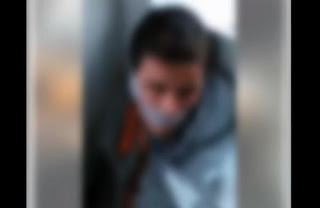 POSTSCRIPT:  I should also point out that I first brought "LA Devotee" up on Tuesday and shortly afterwards the situation in Chicago with video of the young disabled man held hostage and beaten and tortured streamed on Facebook- which was not at all unlike what we saw in the video- hit the news.

So I'd say this is incredibly topical.


FORT LAUDERDALE, Fla. - Esteban Santiago, the accused killer at the crowded baggage claim area of Fort Lauderdale-Hollywood International Airport, told the FBI in November that the government controlled his mind and forced him to watch ISIS videos.

His maternal aunt, Maria Ruiz, who lives in Union City, told reporters in New Jersey that he wasn't the same when he came back from Iraq.

"He lost his mind," Ruiz said in Spanish, as she referred to a psychiatric hospitalization that occurred after he allegedly suffered from hallucinations.

Santiago served in Iraq with the Puerto Rican National Guard's 13th Engineer Battalion from April 23, 2010 to Feb. 19, 2011. The Pentagon said Santiago had gone AWOL several times during his stint with the Alaska National Guard and was demoted from specialist to private first class.

He was discharged for "unsatisfactory performance"  and was given a general discharge under honorable conditions, which is lower than an honorable discharge.

So how was this guy able to get a gun onto a plane? And why does Air Canada seem to have no record of him on any of its flights?

Don't worry, it's probably all a big coincidence.

NOTE: This quote caught my eye- some radical feminists glommed onto the Tarot as a theme for a photography exhibit in London and perhaps inadvertently blurt out where all these neo-Satanism is really going:

The occult allows women to embrace their darker sides, and the idea of the sociopathic or evil women can be powerful. It's good for feminist rhetoric to move away from the idea that to be a feminist you have to be nice all the time. It's important to accept there are evil, nasty women in the world who aren't that perfect version of femininity.

"Sociopathic or evil women can be powerful."

So don't pay any attention to the therapeutic happytalk you hear coming from places like the Satanic Temple. There is a real agenda at work out there. The question is who's pulling the strings.