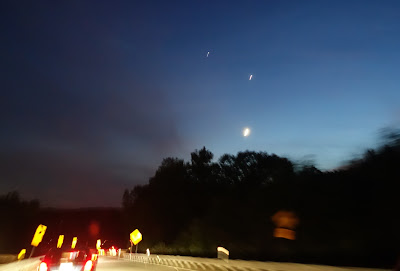 Well, of course it all began with a UFO sighting.

There was an old saying, "When your neighbor loses his job, it's a recession. When you lose your job, it's a depression." So when your son has a high-quality UFO sighting, it's a 'flap', then when you and other family members have one a couple weeks later, I guess it's a 'wave'.
The funny thing is that events conspired for us to be in that exact place at exactly that time. We were headed up to New England but ran into a wall of traffic- I mean a bloody parking lot on the Interstate- which required us to turn around and take another route, wasting a good 90 minutes of drive time in the bargain.
So as we pulled into New Hampshire, we watched as two solid (meaning 'unblinking') lights of a sickly orange color and a distinctly nebulous form flew atop a Cessna (probably coming up from Manchester airport).

I've already discussed this with a couple friends- Mike Clelland said he's been inundated with orange orb reports lately (they've been all over the usual UFO sites too). The plane and the lights were no more than a couple thousand feet off the ground and flying in a tight formation that no air traffic controller would ever allow. 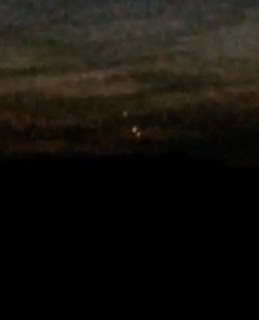 Detail from my son's video of his
May sighting- golden/orange orbs?

My daughter said the orange lights broke ranks and went off in different directions when they broke pattern with the plane and flew over the car. Both my wife and daughter said there was a smaller white light bringing up the rear. These things do seem to come in threes. We couldn't determine if the lights were freestanding or part of larger structures. It could go either way, in my estimation.

Seeing as how I was driving and concentrating on the oncoming offramp, I wasn't able to study the objects in as great detail. I did get the sense that the pilot of the Cessna was probably oblivious to his companions, since they were over his head--and under the radar.

Ball lightning? Earth lights? We were in the Granite State so it's certainly possible. But these lights definitely seemed to be flying under some kind of control, seeing as how they flew so tight (menacingly tight) over the Cessna. We drove back around the next day to see if there were light towers in that location but there were not (plus the altitude was too high).

Had we not been taken by surprise and not spent so much time trying to figure out what exactly it was we were looking at, (the entire event took about a minute -see noteº) my wife might have been able to get some good photos, but they'd probably look a lot like the photo of the stars she took above there.†

In other words, they'd change no one's mind. 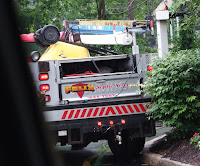 Strange syncs abounded nonetheless: I was telling my wife about Valis (we were listening to Bowie on the drive up) and there just happened to be a truck (#13, no less) from a company called "Felix" parked outside our hotel all weekend.
She booked our hotel in Salem, not knowing Salem plays a pivotal role in the novel I am working on (we usually stay in Manchester). Sleep has been a major issue for me lately so of course we pulled out of the hotel at one point only to find ourselves in back of a guy with the vanity plate "Sandman."

We did get a picture of that... 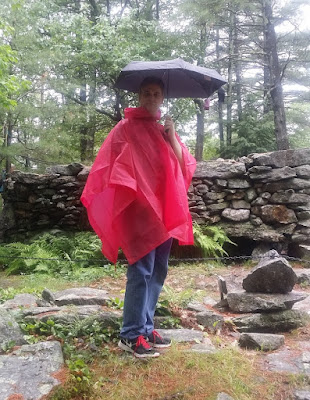 We attended a family function on Saturday but found ourselves with nothing to do on Sunday morning, the Summer Solstice. It was also Father's Day so my wife asked me what I wanted to do and I said we should go to "America's Stonehenge", since it's (literally and eerily) right down the road from my mother's house (which is "a few miles" in New Hampshire parlance).

The weather had been threatening- the forecast called for thunderstorms all day but we got some very nice Vancouver-worthy drizzle instead. So we got some raingear and headed over to Mystery Hill, a crucial stop on the Lovecraft Express. 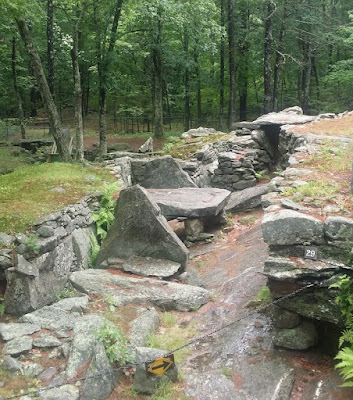 We'd heard a lot of badmouthing about America's Stonehenge but I thought it was fascinating.  I don't think the Brits are losing any sleep over it but aside from its nostalgic Americana value as a classic roadside attraction, the formation has a very deliciously creepy ambiance to it, and the rain and the mist gave it all the feeling of a classic X-Files set (the site is namechecked in a classic second season ep, "Die Hand Die Verletzt"). 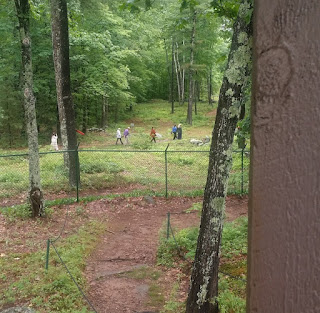 Adding to the vibe was this Summer Solstice procession, though the vibe was more Wicker Man than Mulder and Scully. The folks at the box office told us that Summer Solstice is normally one of their busiest days of the year, with hundreds of New Age pilgrims showing up to celebrate. Apparently the weather and Father's Day kept the revelers away, which probably doesn't say much about their level of commitment.
The rain was a bonus for us, lending a spooky atmosphere the site would probably lack in cheery sunshine. 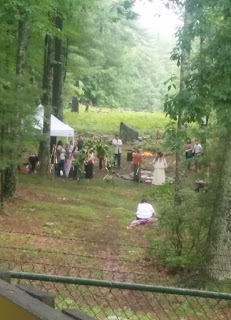 And though certainly unintentional, these photos of pagan rites practiced behind barbed wire seemed to be a fitting metaphor of our times. That being said there was a distinct lack of energy to these rituals, a sense of the obligatory.*

I don't want to sound judgmental but I don't understand why people show up to these things in their street clothes, bringing the associations of the mundane world with them. I would think they would want to separate themselves from their ordinary lives for these rituals, and wear flowing robes and garlands of flowers. I wonder if cosplay and conventions really are the ecstatic paganism of our time, with people really stepping into another reality.

I know there is a lot of overlap with cosplay and paganism. It will be interesting to see how that develops. Maybe you need to step out of any pretense of ordinary life altogether for the magic to really happen. It occurred to me that the really exciting Mystery Hill rituals will probably start as cosplay, as theater, and evolve into something else over time. 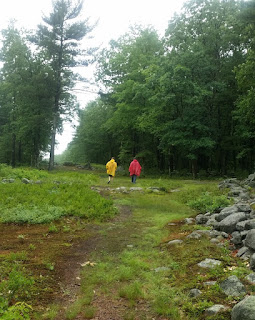 All sorts of thoughts ran through my mind as we walked the grounds. Strangely enough, I grew up with a megalithic structure in my backyard- quite literally. My father's old house in Cohasset (where Witches of Eastwick was filmed) had a very Mystery Hill-like stone garden built of the native stone, a wonderland (of more recent vintage, mind) that I spent endless hours on when he'd have custody of us.
There were also interesting natural stone structures in the woods behind my mother's house so Mystery Hill felt like coming home in a way. 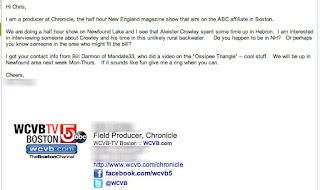 I felt like there was a lot of unrealized potential at Mystery Hill. I also wondered if it made itself available after hours for more secretive sects than the local Gaia enthusiasts. The funny thing is that I was originally planning to drive up on Thursday- a producer at the ABC affiliate in Boston wanted to interview me about Aleister Crowley's summer at Hebron and its connection to the Barney and Betty Hill saga.

So how else could this all begin except with a rather startling UFO sighting?

UPDATE: New Hampshire has had a lot of UFO reports this year, many orange or golden orbs. Remember that most people don't report their sightings to these agencies.

UPDATE: Interesting news from Stonehenge Prime. A whopping 23,000 revelers show up for Solstice celebrations there.

UPDATE: Mike C sends a remarkably similar story to our sighting that was just posted on Open Minds today. Search for more in your area here.

UPDATE: Eric Wargo revisits the extradimensional hypothesis on The Nightshirt. 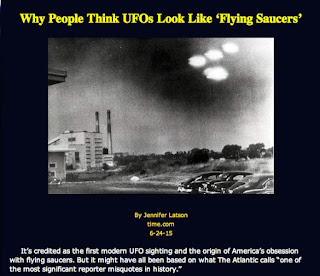 UPDATE: The syncs roll on- Time posts a picture today from Salem....Massachusetts.

UPDATE: Another orange orb spotting, this time in England, the day after ours.

º Note: I originally wrote 15 seconds but having timed that out I realized it was probably closer to a minute. It took long enough for us to look closely at what we were seeing- and comment on it- but not long enough for my wife to get her camera ready. I tend to err on the side of conservatism with these things, which isn't necessarily a virtue.

The missus said the sighting lasted "a while, long enough for us to discuss it." She said it lasted "at least a minute" and didn't know why she didn't get her camera out. I know why- because these things have a tendency to mesmerize the viewer.

† I razzed the missus the entire weekend for taking photos of everything and everything but the one time I really needed one... There was a lot of glare from street lights and whatnot so it's unlikely we would've gotten anything definitive to begin with.  Read this post for my experience of the difficulty of photographing unexpected moving objects in the sky. Still, it's bugging me- it was eminently picture-worthy.

*I was reminded of this when my mother showed me a current directory from my old church, a onetime traditional Methodist church that's now part and parcel of the World Council of Churches agenda. I was shocked by how small the congregation now was, a very common story among what was once called the "Mainline" denominations. In contrast, her current church- a hellfire and brimstone Baptist church- has a membership that could fill a small city. I'm not sure that's a healthy social trend.