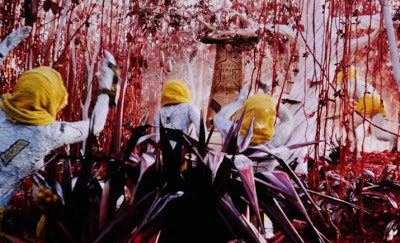 You've probably heard (or seen) that the teaser for the new Dawson's Trek movie has James van der Kirk trying to save the primitive people of "Nibiru," whose planet is about to be destroyed by a supervolcano.

In one of the seemingly endless chase scenes in the film, "Kirk" and the crew are chased by saffron-hooded* natives through a blood-red forest. "Kirk" slows down their pursuers by tossing up a sacred scroll that the Niburans fall down in prayer before. 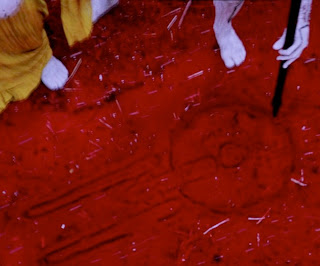 But that zany "Kirk"- he's always breaking the rules. Rather than let Spock die while trying to cold fusionize the volcano (or something), he orders the Enterprise out of its undersea hiding place so it can beam ol' Pointy-ears to safety.
Unfortunately, all the effort made to hide their presence from the Nibiru primitives is all for naught, and they spy the NCC-1701 as it zooms off into space.

Visually, it kind of reminded me of the ST:TOS ep "The Apple," but there was something weird about the Niburans that bugged me, something I couldn't put my finger on until I could take a closer look at them....

Now maybe this is just what they call "fan-service," but the Niburans looked strangely similar to the Son'a, the drug-dealing villainous aliens of the 1998 Star Trek: Insurrection. The two have similar kinds of messed up faces and more importantly, the same oddly-shaped noses, not to mention the hoods.
This didn't make any sense though, was this accidental or was it my imagination? But I realized that there has been a wide range of alien types throughout the franchise's history, so what's up with this odd detail? 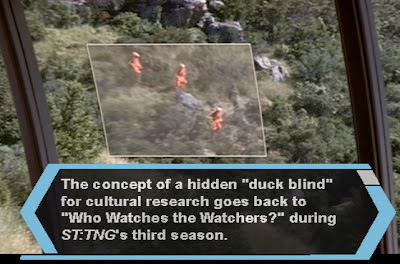 Because Insurrection also begins with a chase scene on an apparently primitive planet, with Starfleet personnel trying to hide themselves from the native population.

In this case there is a "duck blind," which the commentary captions on the special edition DVD helpfully remind us were originally used in the TNG ep, "Who Watches the Watchers?"

Why is this important? 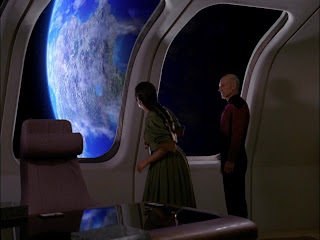 Because "Watchers" has the same plot device as the Star Trek into Darkness teaser;  Starfleet is observing a primitive culture and are discovered.  This was a TNG plot device; we also saw it in "Justice" and "Homeward" (which the Darkness teaser seems to reference, as does Insurrection, albeit in a different fashion).
And "Watchers" depicts that same scenario that the Mithraic Liturgy did so inconveniently at least eighteen centuries ago (or that the Book of Enoch did even before that with its own "Watchers," hint-hint).


You will hear nothing either of man or of any other living thing, nor in that hour will you see anything of mortal affairs on earth, but rather you will see all immortal things.

For in that day and hour you will see the divine order of the skies: the presiding gods rising into heaven, and others setting. 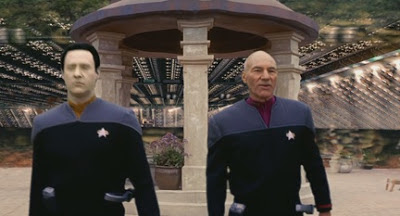 The plot of Insurrection is rather strange and the writing of it was so tortured that its author-- Deep Space Nine creator Michael Piller-- wrote a book about the process, which was subsequently quashed by the studio.

But the story is that the Federation has teamed up with the Son'a (those fellows with the messed-up faces) to collect the rejuvenating radiation of a planet- a literal Fountain of Youth- in a remote part of Federation space called the Briar Patch.

The only problem is that there's a small village on the planet-- the Ba'ku-- a people who have no high technology.

Our heroes on the Enterprise discover that the Federation and Son'a plan to move the Ba'ku off the planet on a holodeck-equipped ship and then onto another planet. Picard's antagonist- a Starfleet Admiral-- makes perfect sense in arguing that the Ba'ku aren't native to the planet and that the radiation from the rings around it will help billions of people throughout the Federation.

Again, it doesn't really make any sense; Picard is fighting for the right of a tiny elite (the Ba'ku are not primitives but space hippies (though not of the "Way to Eden" variety, sadly), who renounced technology, live off the land, and use the power of the planet to develop their psychic and mental powers and achieve immortality.

But what if the story is all a metaphor for something else? And what if it might be the result of a kind of automatic writing, something even the writers weren't consciously aware of? 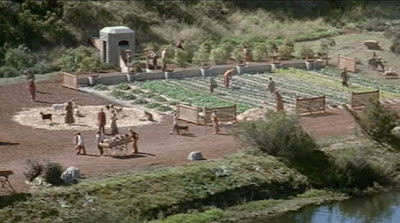 Because I've been to the Ba'ku homeword- it's in Big Sur, California and it's called Esalen.

OK, no one at Esalen is immortal as far as I know. And I don't think there's much psychic research being done there these days. But the minute I stepped foot on the plateau where the lodge and the swimming pool sit overlooking the Pacific Ocean (and where you can see the curvature of the Earth) I was struck with the most powerful feeling of deja vu. I soon realized it was the Ba'ku homeworld that I was processing here. 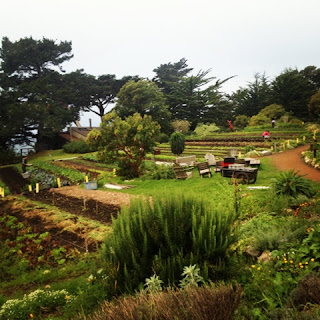 Listen- don't take my word for it. Watch Insurrection on the biggest screen you can and then go to Esalen. Repeat the experiment. You'll see what I mean. Sure, the Ba'ku homeworld is a bit more Hollywood, but otherwise it's eerie. 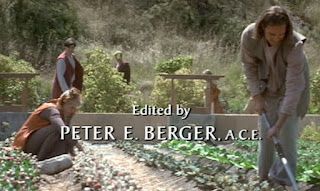 The credits of Insurrection have scenes like this- crunchy young hippies growing their own food in the California sun? It could be straight out of an Esalen catalog without changing a pixel. 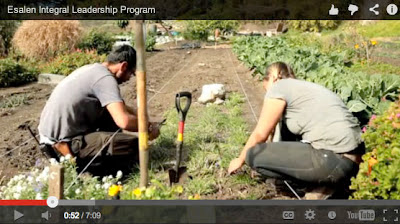 In fact, here it basically is. 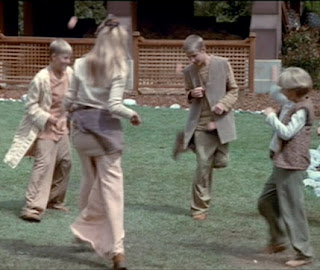 And earthtone-garbed kids playing hackysack?
I mean, seriously. Again, if you don't believe me, go there yourself. Ba'kuville is Esalen. Period.

Or rather, it's the Esalen of the past.

It's no secret that Esalen today is a New Age resort for the SiliCylon Valley and San Francisco elites. It's a spa, essentially. I wasn't idle in my off-hours when I lectured at the CTR; I spent time picking the brains of some of the volunteers to see what was really going on there, and most of them were pretty disenchanted as well (disenchantment with Esalen has become a major news story recently).

I certainly saw not a whisper of a hint of the kind of nefarious goings-on you read in conspiracy literature about the place. Which was kind of disappointing in a strange way.†

No, it's a very, very pretty place to go and be crunchy for a week. Eat some good, fresh food, get a nice massage, have a nice hot bath. Maybe do the sweat lodge or drum circle. But I very much got the feeling that like all vestiges of the Aquarian Age (like St. Mark's Place and Haight-Asbury), Esalen was a museum of a counterculture that was co-opted as soon as it could be quantified. And was only ever truly accessible to the children of privilege (psychotherapy in particular has always been the indulgence of the rich).

I would go so far to say that I very much got the feeling that the adventurous, often-reckless "try anything" spirit of Esalen died with co-founder Dick Price all the way back in 1985.

So, you may be asking; Star Trek and ancient astronauts are a gimme, but what the hell does this all have to do with Esalen? Many of you know the answer already but those of you who don't, here's a hint:

That's just a hint, though. This story is a hell of a lot weirder than I ever thought it could be.

*Remember those hoods and robes- they'll pop up later.

† But it certainly reminded me how a certain strain of conspiracy theorizing is about projecting the fear of things the theorists are actually afraid of onto things they are not (long-dead people, obsolete movements or groups, similarly neutralized or imaginary threats). It's a kind of homeopathy.