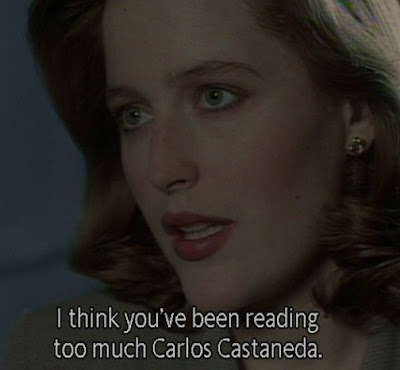 By the time you read this, the headlines will be screaming about mass UFO landings all across the globe or it will be just another ordinary day in October.
I'm not a betting man, so I'll keep my own counsel as to which is the more likely scenario. But let me just say that I've seen a lot of mass landing prophecies come and go, along with a whole host of second coming prophecies. The two expectations are closely related.
Here on The Secret Sun we've been looking at all kinds of more intimate contact narratives, including a whole host of plotlines from various fictional sources that bear a striking resemblance to divergent reports from shamanism to psychedelia to abduction literature. There's a host of narratives describing what some would dismiss as hallucination, but seem to have improbable thrulines. All the more improbable when you factor in the vast geographical, cultural and temporal differences among them.
One of the reasons that my X-Files obsession outlasted the series itself is the layer upon layer upon layer of hidden meaning woven through it. It was well-known that they dropped "easter eggs" throughout the series- names, dates, trivial nonsense like that.
Less known is all of the heavy, heavy weirdness hiding beneath them. It just takes a lot of time and patience to pick it all out. Here's one of my discoveries, from an earlier Alien Dreaming post:

Through the series, episodes centered alien identity and AAT would be preceded by episodes dealing with either hallucinations and/or hallucinogens. The first explicit inclusion of AAT in the Mythology was The End, which was preceded by an episode about an insectoid vampire (nearly identical to the ancient Martians from Quatermass and the Pit) that disguised its appearance by psychically implanting a hallucination of itself as human in the observer.

The major revelations of Biogenesis/The Sixth Extinction (with "Dr. Sandoz" and his revelatory "alien tablets") was preceded by the giant magic mushroom in Field Trip, as we looked at previously. The episode in which we first saw Scully's baby (conceived following her exposure to ancient alien technology) was produced right after Via Negativa, an episode about a Iboga guru who kills his victims in their dreams.

William's alien identity was explored in two separate arcs: in TrustNo1, aired after Lord of the Flies which had a Syd Barrett subplot, and in Providence/Provenance, preceded by Hellbound which dealt with hallucinations of murder victims.

The problem with all of this is that I was wrong: in the second season the Mythological blowout preceded the explicit entheogenic episode. But there was no shortage of mycological symbolism in the MythArc ep either. 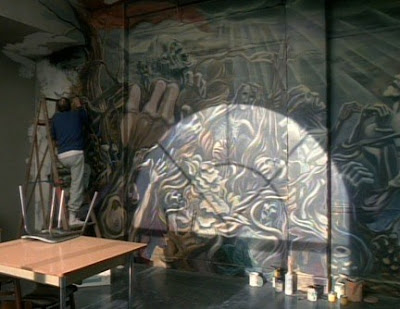 The episode Excelsis Dei was a spin on the Ron Howard film Cocoon (which we recently looked at in the Atlantis Rising series) in which a group of elderly people are magically rejuvenated by an external force. As with Cocoon, there was the requisite water symbolism, but unlike Cocoon, the seniors were also endowed with frightening psychic powers.... 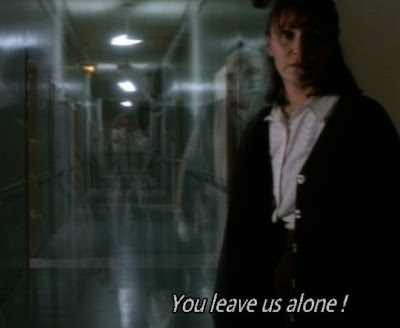 ...which summoned our old friends the Walk-Ins (though a more malevolent variety). And unlike Cocoon, the rejuvenation powers didn't come from alien intervention... 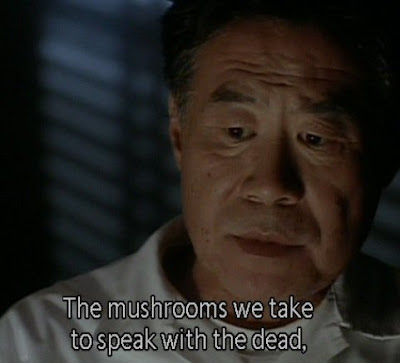 ... it came from the use of psychedelic mushrooms. Or maybe that's like Cocoon as well, if you're initiated into these strange Mysteries that lurk behind so much Hollywood sci-fi. As I said of Cocoon itself:

And as usual, the mothership strongly resembles a mushroom cap with the heavenly beam acting as the stem (a common icon well familiar to Secret Sun readers).

Again, we're square in the middle of AstroGnostic territory - the alien gnosis offering escape from the fallen world that sickens and kills good people, and deliverance to the higher planes where the power of the Demiurge and his archons is broken and the knower is given eternal life. 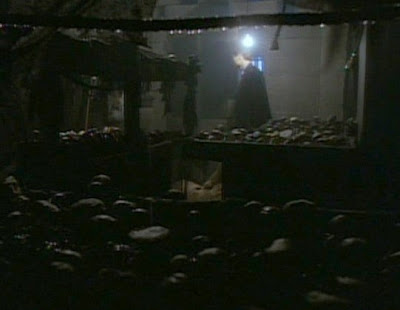 As to those Mysteries, compare this shot from The X-Files (a show about extraterrestrials)... 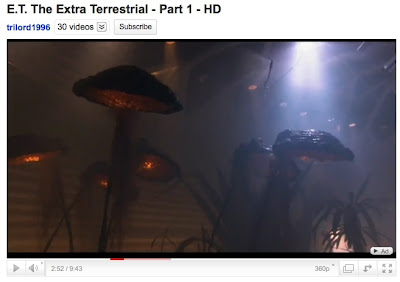 ...with this one from E.T., The Extra-Terrestrial. Is Spielberg telling us where he first encountered those xenomorphs he's seems to be so obsessed with?
Terence McKenna wouldn't even blink. 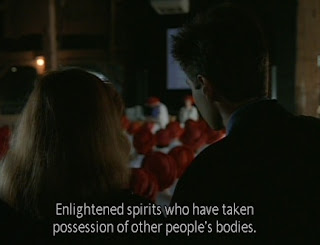 He'd love this, though. Before Excelsis Dei came Red Museum, an episode that absolutely blew my mind when I first saw it, and retains its mule kick with repeated viewings. As I wrote about it in the I Want to Believe series:

(A)n earlier episode called Red Museum, which deals with hallucinogens, ancient aliens as gods and DNA manipulation, all of which is exposed by the actions of a sexual predator. Both stories hinge on the concept of "Walk-Ins," a type of spiritual intervention popularized by UFO cults in the 1970s.

The "Church of the Red Museum" are radical vegans who are purifying their bodies so that they can host the alien walk-ins when the Apocalypse strikes in 2012. They are led by a man who calls himself.... 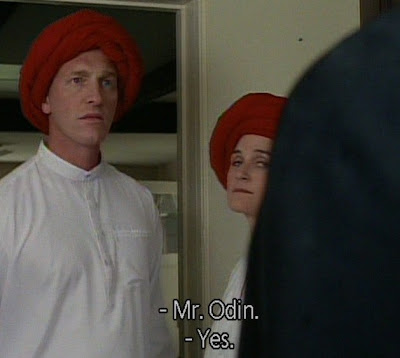 Some folks will recognize Odin* from shamanic lore identifying the god with - you guessed it:

Mythology recorded in modern times contains some stories in which Wotan (Wodan or Odin), the shamanic god of ecstasy and knowledge, was associated with the fly agaric mushroom. According to legend, the fly agaric mushroom grows where Wotan rides on his horse through the clouds with his followers, the members of the wild hunt, in the dark nights around the time of the winter solstice. 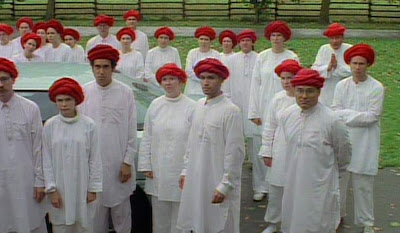 That connection should be pretty clear from the distinctive outfits worn by the Red Museum themselves... 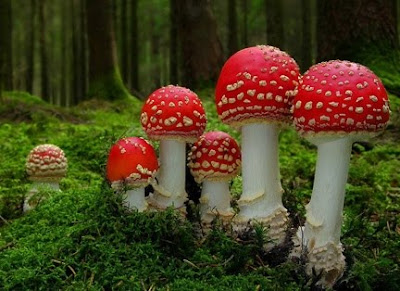 ...don't you think? Scholars tie this all the way back to the earliest peoples of the North, stretching a far east as Siberia, which itself has a rich shamanic tradition:

The characteristic red mushroom with its white dots is the Nordic shamanic drug par excellence. Most shamans of the Northern Hemisphere ate it ritually. Its shamanic use can be traced to the Lapps, the Siberian nomadic peoples (Samojeden, Ostjaken, Tungusen, and Jakuten), and the North American Indians. 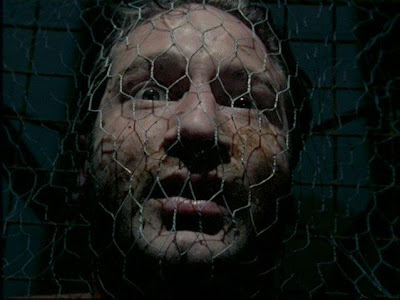 Speaking of Siberia, guess where Mulder was first injected with alien DNA (which was activated by his exposure to the Godship, which brings us all the way back to the first part of this sprawling series)?

* soon to be played by Anthony Hopkins, star of Silence of the Lambs- a huge influence on The X-Files. Ah, those full circles...