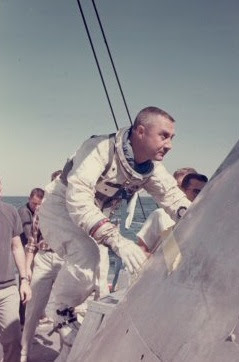 In the past 36 hours this blog has been bombarded with thousands of hits, after a Drudge Report-type site linked to part one of the Gus Grissom/Barackobamun piece. There were the usual corny old jokes about "tinfoil hats" and all of the rest of the worn-out snark in the comments sections (along with some stunning displays of poor reading comprehension), but that represents only a tiny percentage of the traffic.
Having been on the internet for the better part of the last two decades, I recognize defensive ironic distancing when I see it. What's more, I'm noticing that other sites are picking up on the meme. It's too soon to say how resonant the meme will become, but it did get me looking at Obama's possible Grissom obsession again (and that's what I was writing about- not a conspiracy, per se.)
In the first few seconds of doing so, I found this speech to the National Academy of Sciences on April 27, 2009. Although it was a more general (read: "boring") gabfest on science and technology, Barackobamun spoke about his support for the space colonization program:

My budget includes $150 billion over 10 years to invest in sources of renewable energy as well as energy efficiency. It supports efforts at NASA, recommended as a priority by the National Research Council, to develop new space-based capabilities to help us better understand our changing climate.

And he even snuck in the Magic(k) Number:

America's young people will rise to the challenge if given the opportunity -- if called upon to join a cause larger than themselves. We've got evidence. You know, the average age in NASA's mission control during the Apollo 17 mission was just 26. I know that young people today are just as ready to tackle the grand challenges of this century.

So what's the big deal about this speech? Nothing, really.
Except it took place of 50 years to the day after Gus Grissom was chosen by NASA for the Mercury Project.

So, is that really the Sun
in the Obama logo?
Not being a round decade interval, Obama didn't mark the Liberty Bell 7 mission in any noticeable way. But he did cut $1.7 Billion from the F-22 program, a move the fastidiously-ethical Grissom would have applauded. 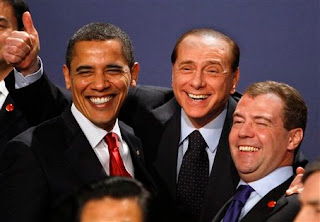 Italian PM Silvio Berlusconi has failed to declare the presence of 30 ancient tombs on his land, according to newly published recordings said to be of him.

The tombs date from 300BC, a man said to be Mr Berlusconi was heard saying.

Hey, guess what else? Berlusconi is a P2 Mason!

UPDATE: Tommy looks at the decline of Fark and the kneejerk reactions to the post. I'm not surprised by any of it. If the post was truly nonsense, they wouldn't have spent any time on it. But it obviously got under their skins- that is, those few who read above a 8th grade level. I've seen this process over and over again.
But it ties into a wider issue... We're in a period of reaction following long years of political dominance by forces tied to the religious right. Now we're seeing a kind of dyspeptic, dogmatic materialism and radical adherence to scientistic authority become the default setting not only for the Left, but also for the marginal types looking for bandwagons to hop.
It's a temporary thing- I've seen these kind of mass memes come and go on the Web at an increasingly brisk pace. But these movements always overstep their bounds, because they inevitably attract non-thinkers with their own axes to grind. And soon even people within the cult become bored and frustrated by the declining quality of discourse and the Great Wheel turns yet again.
Unwisely, the skeptic/atheist crowd have tied their wagons to Obama and the Democrats (ie., the left wing of the Neo-Feudal oligarchy) in a big way, but are forced to watch them disintegrating at an only slightly-slower pace than the Republicans. If Obama continues to fail, not only will the Fundamentalist forces be re-emboldened (and cut loose from the slight bonds of politesse that the GOP insisted upon), so will very angry types in the Libertarian and Patriot undergrounds.
All of these people not only supremely resent the kind of mocking and dismissal that they have to deal with from the Left, but a lot of them are being squeezed economically -- and are also armed to the teeth. Not a good situation for anyone, and we've already seen the horrible results of this recipe.
Now, anyone who spends more than five minutes on this blog knows I'm not some wild-eyed hysteric. But the very word "Freemason" is a red flag to some non-thinkers, who have no concept of the history or continuing influence of the Craft or affiliated groups, all of whom are very well represented in Washington and other capitals. And there is so much hysteria about Masonry - a lot of which I believe is self-generated- that no one can discuss the topic without inspiring knee-jerk reactions.
This blog looks at esoteric themes primarily in the entertainment sphere, and there's no arguing the increasing prevalence of these themes. Believe me, if the Michael Schermers and Phil Plaits of this world had their way, there would be a skeptic/atheist version of the Hays Commission, policing and censoring esoteric and supernatural content in TV, video games and movies. And soon after, America's entertainment industry would collapse.
But as Frank Zappa said, politics is the entertainment wing of the Military-Industrial Complex. Perhaps when we see politicians toying with esoteric iconography (or worse, the shenanigans at Bohemian Grove and the like) we're subconsciously confronted with the unreality of our political clownshow, which millions of people- liberal and conservative- regard with the utmost seriousness.
To acknowledge the power of secret societies is to doubt the American myth of the sovereign citizen, and to acknowledge the possibility that these groups may wield some unexplained power mortally challenges the scientistic myth of the primacy of the conscious, left-brain mind and the illusion that the scholars and scientists are born to rule.
Ironically enough, the last two were the original mandate of the Illuminati, before they entered into the mythic realm.
at July 24, 2009