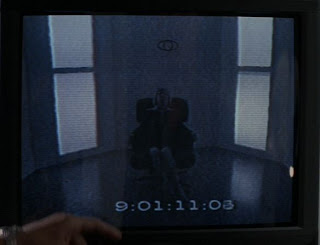 Investigating an air crash and finding
a psychic, from "Exegesis" (1998)
Get your innerspace suits on, we're going for a ride...
Droidy had a post up last week with a clip from the Millennium episode, "Owls," which had Peter Watts (played by Terry O'Quinn) explaining the worldwide Masonic conspiracy to Frank Black (played by Lance Henriksen).
That episode was written and produced by Glen Morgan and James Wong, who created the Lone Gunmen (originally known as the "Three Paranoids") and wrote some of the key early episodes of The X-Files. Morgan and Wong (aka "The Wongs") changed the direction of the show, turning the Millennium Group from a bunch of crimestoppers into a Masonic secret society with an apocalyptic agenda (a move that I'm sure makes sense to people familiar with the cozy relationship between Masonry and law enforcement).
The Wongs finished up their run with a viral apocalypse, which made things a bit difficult for the new producers when Fox unexpectedly renewed the series for a third season. In the 1998-99 season, Chris Carter returned to the helm (the Wongs had taken over when Carter and Frank Spotnitz were working on the first feature film) and signed Chip Johannesen and Michael Duggan as showrunners. And then the really heavy stuff came out.
The show's ratings had tanked halfway through the second season and never recovered, and it seemed as if Ten Thirteen meant to take advantage of the show's low profile and dig into hot button topics they wouldn't touch even on The X-Files.
Carter, Johannesen and Duggan used Millennium to dig into deep, deep covert stuff, such as CIA drug dealing, messianic Third Temple radicals and military medical experiments. There were also a bunch of mind-control themed episodes, and the remote viewing subplot in the two-part season opener, "The Innocents/Exegesis." 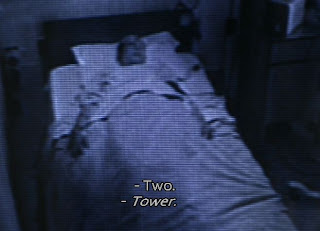 In a hair-raising teaser, two psychic sisters intentionally crash a jetliner in order to throw the Millennium Group off of their mother's trail. Known only as "512," the matriarch was the most gifted remote viewer at the Stanton Research Institute's "Project Grill Flame," obviously modeled on Stanford's program of the same name.** Here's a bit from a fansite synopsis.

Emma (Hollis, Frank's partner, played by Klea Scott) discovers that document cinders found inside the demolished house were pieces of Freedom of Information requests made five years earlier. The documents made mention of a government project called Grillflame.

Frank recognizes the name as a CIA project run through the Stanton Research Institute. Emma travels to the university, where she meets with Dr. Coty. He explains that Grillflame was a government project that employed "psychic spies." - Millennium: This is Who We Are

Dr. Coty is a stand-in for Russell Targ, whom I had the pleasure of meeting at Esalen in June (read my posts on the symposium here and here) where I gave a presentation on Jack Kirby and Synchromysticism. I will say that prior to that trip I was a RV skeptic, but now I'm starting to see it as an important part of the overall Synchromystic phenomenon. 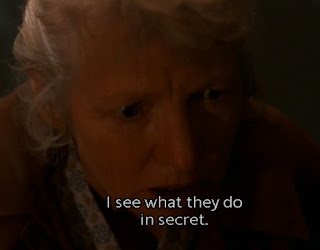 I don't need to remind regular readers of the powerful synchronicity of two sisters and an intentional plane crash. But I would note that this episode aired three years before 9/11 and two and a half before the notorious pilot episode of The Lone Gunmen, which was analyzed a year ago in the post, "Nine Eleven Ten Thirteen."
Just to add even more fuel to the fire, there was extensive use of Monarch butterfly symbolism in the 512 storyline, on top of a subplot of secret societies planning a manufactured apocalypse.
But in between this semiotically-loaded story and the even-more remakable Lone Gunmen synch, there was yet another strange premonition of 9/11 that brought Ancient Astronaut Theory and the Sirius cult into the powerful semiotic orbit of Ten Thirteen Productions. One that only came to me when I was poking around Richard Hoagland's archives over the weekend.
Hoagland was blown away in 1999 (as was I and a lot of other High Weirdness enthusiasts) when The X-Files episode "Biogenesis" aired at the end of the show's sixth season. The story dealt with the discovery of bits of metal that were covered in passages of Hebrew Scripture written in the Navajo alphabet, yet were discovered off the coast of Africa and determined to be millions of years old.
The episode ended with the discovery of an alien ship, which Scully went to Ivory Coast to study when the alien virus lying dormant in Mulder was reactivated by the radiation contained in rubbings taken from pieces of the craft. The three-part storyline was laden with Isis symbolism as well, which we looked at here.
The teaser for the coming season announced that the story would be picked up again at the beginning of the seventh season on November 7, 1999. 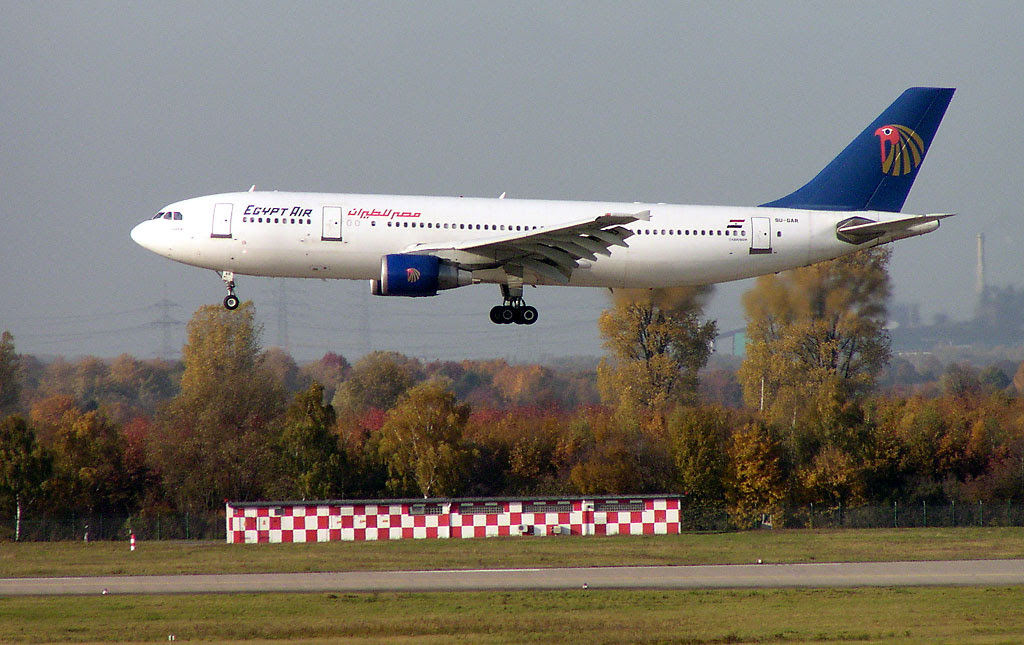 Note EgyptAir's Horus logo
At the time, Hoagland had received a mysterious phone call telling him that there was some catasrophic "Deep Impact" event coming on November 7. Hoagland took the story up again on October 13, 1999 when he learned that the X-Files episode airing on November 7th was entitled "The Sixth Extinction."
However, a week before the fateful date- Halloween 1999, to be exact- there was a air disaster involving EgyptAir flight 990, which en route from New York to Cairo crashed off the coast of Massachusetts, † causing 217 fatalities.
Hoagland and writing partner were all over it, since the whole event was absolutely drenched in numerology and symbolism, not the least being that the plane was named Thothmosis III ("Son of Thoth"). Neocons siezed on the event as an act of terrorism, since the plane was carrying 33 Egyptian Army officers.
The story would be revisited in the days following 9/11 as well, with a CIA report released on October 17, 2001 claiming the EgyptAir disaster inspired the 9/11 attacks. But 11/7/99 came and went, despite reports that the military would be on high alert that day. But here's where we go back to Grill Flame. Hoagland says he got reports of some unspecified Deep Impact event for that day, but it probably didn't come from an astronomer.
It sounds more like a garbled but essentially accurate prediction by a psychic or remote viewer. 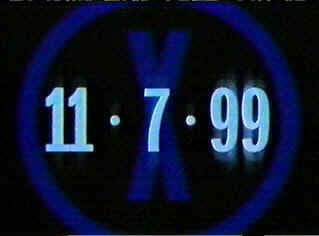 As we've looked at with Jack Kirby's uncanny precognitive track record, these foreshadowings seem to follow dream logic, not the linear, literal patterns that the right-brain impaired naysayers demand or that pseudo-psychics like John Edward or Sylvia Browne take to the bank.
Remember, we're dealing with The X-Files and Ten Thirteen Productions here, one of the richest semiotic lodes in popcult history. It was the title card above that flashed the meme of 11/7/99 into the subconscious minds of millions of viewers. And it is here that we see yet another 9/11 precognition.
Reading left to right we have 99-7-11, which ties back to the theory that '99 crash of Flight 990 led to September 11, since the word September comes from the seventh month of the Roman calendar. So what we may be looking at is a kind of psychic code for a different kind of Deep Impact event.
Remember that September 11 is New Years Day in the Egyptian Coptic Calendar. And this brings us back -yet again- to the overarching Sirius narrative that people like Hoagland and Robert Temple were writing about back in the earliest days of the World Wide Web:

The Coptic calendar, the oldest in history, originated three millennia before Christ...It is believed that Imhotep, the supreme official of King Djoser C.2670 BC. had a great impact on the construction of the calendar.

Historically, ancient Egyptians initially used a civil calendar based on a solar year that consisted of 365 days only...they knew an astronomical calendar which is based on an astronomical concept namely the heliacal rising of a bright star called Sirius "Canis Major, the Dog Star" at the dawn of the eastern horizon. The day on which the heliacal rising of Sirius occurs marks the first day of the year. -

What else is fascinating is that the "Sixth Extinction" storyline not only touched upon Christian symbolism, it also foreshadowed the coming of William Mulder, the child whose conception ultimately resulted from Mulder and Scully's exposure to the cosmic radiation of the alien ship. And it was William who later be prophesied to be the new Horus (in episode 9.11, no less).
It's all very scifi in the context of the series, but the symbolic parallels are extremely compelling. And to tie it all back to Grill Flame and remote viewing, exposure to this alien radiation granted psychic powers, as we saw with Mulder in "Biogenesis" and even with John Doggett in "Providence" (which I had my own precognitive run-in with). Kind of makes you wonder, doesn't it?
===========================================

NOTES
*Let me just say that I can't recommend Millennium highly enough if you're at all interested in the topics covered on this blog- like the X-Files it's an absolute semiotic goldmine, as well as a terrific crime drama.
** Pronounced Five-Twelve, the sum of which equals 17.
† Note that both New York and Massachusetts played pivotal roles on 9/11
at August 12, 2008