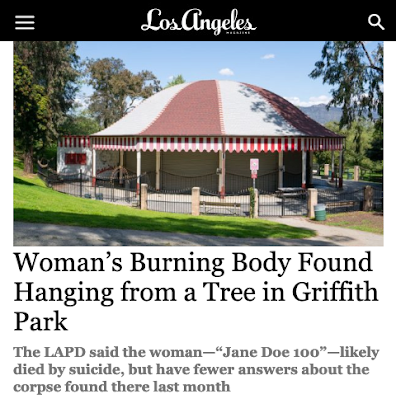 A reader pointed out that four days after Anne Heche's purported fatal crash that there was another mysterious immolation across town in Griffith Park. And this one is even sketchier than what allegedly when down in Mar Vista.

A burning body was found hanging from a tree in Griffith Park Tuesday a few hundred feet from the merry-go-round. The passerby who first came upon the body at around 12:30 in the afternoon called for park rangers, who in turn called the police. Firefighters extinguished the flames and declared the person at dead at the scene.

It appears to be self-immolation,” LAPD detective Michael Ventura told ABC7. “This is going to be somebody who brought some gasoline, brought some lighters. We have had… they are rare, but we do have cases where people will self-immolate.”

I bet they do. But this kind of violent suicide is highly unusual for women.

I can't work out the logistics here.

Notice the word-spellcasting as well: “This is going to be somebody who brought some gasoline, brought some lighters."  Most people scanning the article will assume that the cops did find such things, but if they had done they would have said as much. 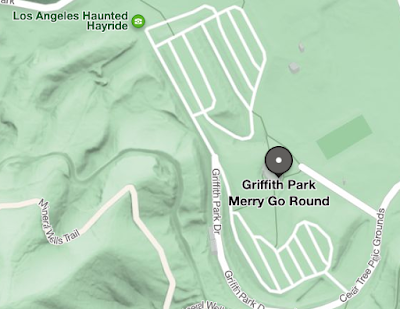 A representative for the Los Angeles Police Department told LAMag that investigators “definitely found no found play” and ruled the matter a suicide, saying the case was closed.

The L.A. coroner’s office confirmed that the death was reported as a suicide but given that an examination is pending, there currently is no cause of death. The body belonged to a female who has only been identified as Jane Doe 100.

I'm no law enforcement expert, but it seems to me that you may want to take more than a couple of hours investigating a homicide before closing the case.

Another body was found in Griffith Park on July 23, the Los Angeles Times reported. That body was discovered in some underbrush and has not been identified and the case is also closed.

The LAPD said that the deaths are unconnected.

Nothing ritualistic about Griffith Park, either. Right? 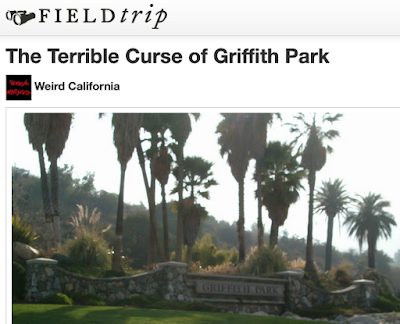 The area that is now Griffith Park has a crazy history that dates back thousands of years—long before European settlers ever set foot in the State of California. In just the last few hundred years, Griffith Park has hosted insane family feuds, a series of hasty land transfers, and a grim reputation for being haunted by the many deaths that have unfolded in the hills. It’s also allegedly been cursed since the mid-1800s.

Here's a curious sync- the burning woman was found directly parallel to Jack Parsons' "Parsonage", home of the notorious Agape Lodge of the OTO, which was such a madhouse that even many Thelemites think they'd gone off the rails.

Speaking of Thelemites, let's backtrack to our previous discussion:

The film was co-written and directed by the late Donald Cammell, a portrait-painting prodigy turned filmmaker, best known for co-directing Performance with Nicolas Roeg. But he was also mixed up with some unsavory elements from early on.

And in an apparent effort to preemptively LARP Weird Scenes from Inside the Canyon, Cammel had lived and died in Laurel Canyon, just outside Lookout Mountain. And like his rock star buddies Cammell had a yen for underaged flesh, hooking up with the woman who'd become his wife when she was barely fourteen years-old. 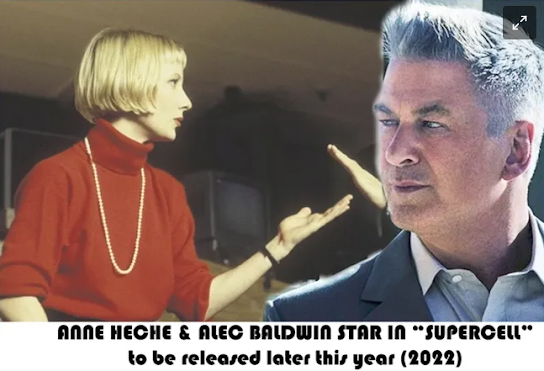 Here's another weird little detail. You might want to have a listen to some of the videos before Anne Heche's crash and ask yourself why it sounds like she was desperately trying to brake as her Mini Cooper barreled down the boulevard.
And you may also want to start thinking about getting the hell out of BabaLAon. There is something seriously fucked up at work in that town.
at August 16, 2022