The Apocalypse Makes for Strange Bedfellows

When it rains it pours: my old pal Derek Gilbert of SkywatchTV invited me on to his podcast to talk about the Lovecraft-Alice Bailey nexus, and we ended up touching on a whole host of other topics such as the Sorcerarchy, demonology and the existential evil of the Bush Crime Syndicate and their neocon toadies.
We go into Lovecraft's extremely dodgy personal life, his connections to intelligence networks and his mysterious travels to third-tier provincial cities and speculate on the motivations of the shadowy forces feeding Lovecraft, Crowley and Alice Bailey the kinds of crypto-Watcher theology they all popularized.
We also hit some familiar bases such as the Naval Intelligence-engineered hoax of the "Babalon Working" and the Jack "Patsy" Parsons legend, the hellish origins of Prosperity Gospel and its early 20th century antecedents like Napoleon Hill.
We also commiserate on the struggle of conveying the irreducible reality of sorcery and the supernatural to our respective communities, and discuss how this reality was taken for granted by some of the greatest minds of the ancient world.
Our discussions on demon-possession being rife amongst the Antifa-BLM tweekers were sadly punctuated by this video going live right around the time of a multi-fatality attack on a Christmas parade in Wisconsin. Rather Synchromystically, one might say.
Derek has wisely retreated to the hinterlands - as should we all, eventually - so we were struggling with some technical difficulties. But all in all it came out perfectly fine.
JUST LIKE OLD TIMES
I hadn't been on Derek's show since 2011, since he and Sharon were tapped by Tom Horn for his burgeoning media empire. I was a big fan of their old Peering into Darkness show, having met them through Vyzygoth, onetime host of From the Grassy Knoll.
I made my first-ever appearance on Vyz's show back around 2006 or so to talk about my Lucifer Rising story and interview with Bobby Beausoleil. Vyz had me on a couple more times until he decided I was a godless heathen and ghosted me. Story of my life.
Either way, I love Derek and Sharon quite a bit. I may not always agree with them on some things on account of I don't always agree with anyone about anything, including myself. But they're both on the side of the angels, are truly the salt of the earth and most definitely know what time it is.
By which I mean it's time to make common cause with people you may not see as your natural allies but who also yearn to pry the boot heel of the Global-Corporate kill-cult from their throats. We're looking at an all-hands-on-deck situation that make go on for quite some time yet. The Apocalypse makes for strange bedfellows.
Derek and Sharon also very solid researchers, of the old school variety, and the connections Derek is making in his new book The Second Coming of Saturn are coming in quite handy in my ongoing investigation of Neo-Mithraism. I'm hoping to tear him away from the grindstone for an interview for my Patreon podcast, so keep an eye out for that. 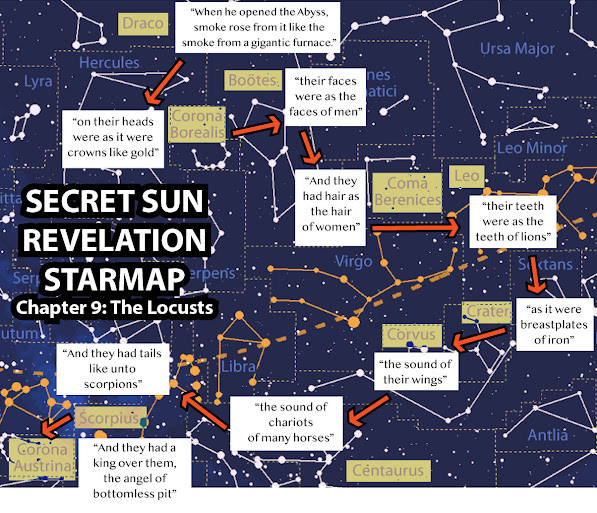 John of Patmos prophesying it to
all hit the fan during the Draconids
Speaking of the powers of Sync, I'd mentioned my Revelation star-map work to Derek and his interest was definitely piqued. I'm a bit anxious, though, since I don't want it to come across as 90s-styled Astrotheology-Mythicism. It's anything but to me.
I mean, I loved Dorothy Murdock (AKA Acharya S) as a person very much as well, and you can't fault her energy or education, but I came to believe she was not only dealing with some very deep and unresolved inner turmoil (she was a very spiritual person IMO) but was also drawing quite heavily on a lot of dodgy sources like Gerald Massey. I've written at length as to why I reject the Mythicist position and I'm not too proud to admit I was chicken to do so while she was still with us.
Anyhow, as I was stewing over this dilemma, I happened upon this passage from the very first chapter of Genesis that someone had tweeted while reading something else entirely:

And God said, “Let there be lights in the vault of the sky to separate the day from the night, and let them serve as signs to mark sacred times, and days and years."

Chart the signs and the times in The Den of Intrigue.