Back to Square One, Another Empire Backfire 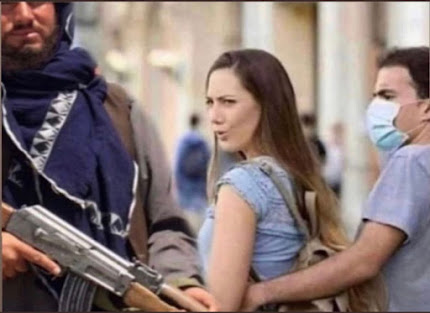 The Mememakers have been keeping busy with the latest imperial epic-fail. This pretty much sums it up. Sums what up, you ask? Well, everything.
Just think on it a spell.
TROLL LEVEL: EXPERT 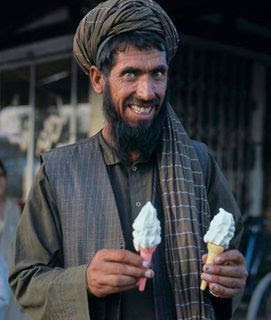 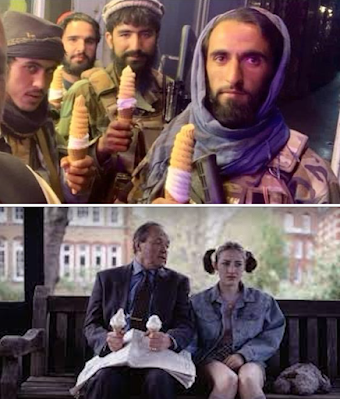 Who'd ever thought a bunch of "austere religious scholars" would have Chan-level trolling chops? The ice cream bit would be even funnier if they actually got the ritual subtext behind it.
Hint: The Stele (of Revealing) Does Tricks. 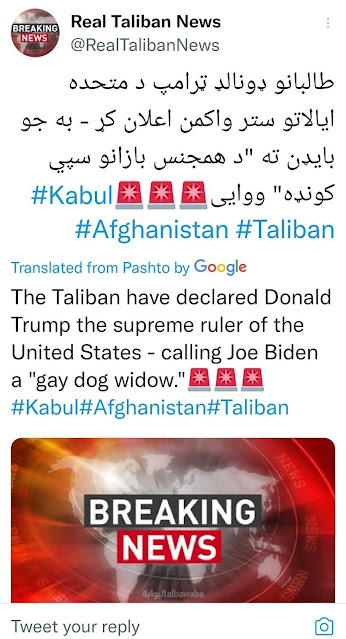 Unlike our corporate-capital submissives, the Taliban also seem to realize that Wokeness and Intersectionality are nothing but CIA scams created to derail class-based politics and economic justice.
They also realize they can flout Woke diktats with impunity, because they're not seen by historical and biological illiterates (meaning every single person who's come out of the university system in the past 30 years) as what they actually are: literal Caucasian men.
Meaning people who came out of the Caucasus Mountains, not all that long ago. Tell your cat-lady wine-aunt to look it up once she finishes the new Robin D'Angelo. 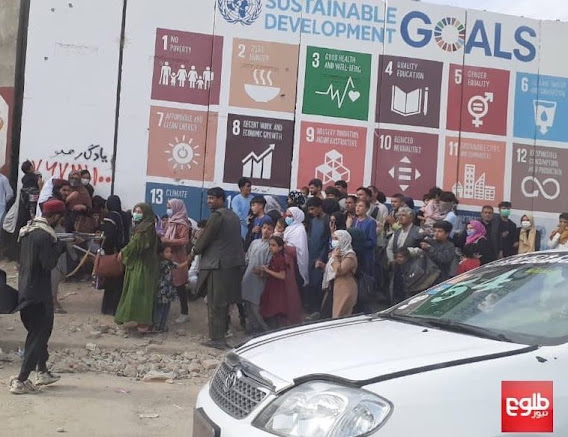 And if Auntie Karen doesn't think the Talibs deliberately staged this little photo-op for her and her friends' benefit, tell her she should probably hit the books a bit harder.
This is just the start, too.
The Taliban proved what people who actually pay attention to these things have known for a while now: the Empire has no clothes. Bloated, graft-ridden Western militaries are worse than useless when it comes to fourth-generation warfare, and NATO propaganda mills like the UN can't do shit about it.
Sadly, this is what ultimately and inevitably happens when you spend a century or two running around the globe killing people and stealing their shit. Every empire before us has learned this the hard way, but I guess American exceptionalism insulated our particular pirates and predators from the cold winds of History.
If you get one thing out of my delirious rantings here, I hope it's this: History is cyclical, like all facets of Nature. Linear progression, sacred or secular, is a myth and a very deadly and dangerous myth at that.
Everything is born, lives and dies, including empires, and trying to escape the inescapable cycles of Time always leads to misery, atrocity and despair. 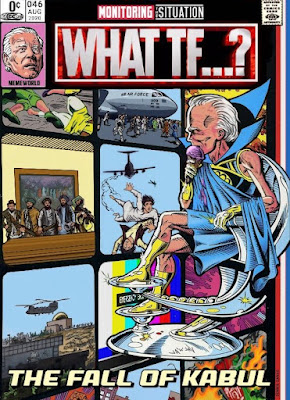 This is why I'm so happy that Biden is in the White House, nominally at least.
Biden is the perfect embodiment -- the avatar, really -- of the korporate kleptocrat state circa 2021: a shredded, shriveled husk so bogged down by greed, dementia and venality that he can't even accomplish the simplest of tasks anymore. Such as a long-anticipated military withdrawal from a war we were lied into, by the literal worst excuses for human beings this country has ever produced.
It's only going to get worse. Crazy worse. Wait until China and Russia start annexing all their lost territories and the once-mighty US military stands there watching with their thumbs up their asses. I think Putin and Xi might wait a bit for the current shock to wear off and complacency to set in once more, but I can't see any good reason they won't tell Uncle Sam to go fuck himself and do whatever the hell they please.
And all the overprivileged corporate bootlickers and shills who spent the Trump years pretending they were Abbie Hoffman and Angela Davis can just suck on it while it all comes crashing down on their fucking heads, one grift after the other. They own it all and should never be allowed to forget it.
The schadenfreude will be exquisite. Use it to warm your soul in the cold times to come. 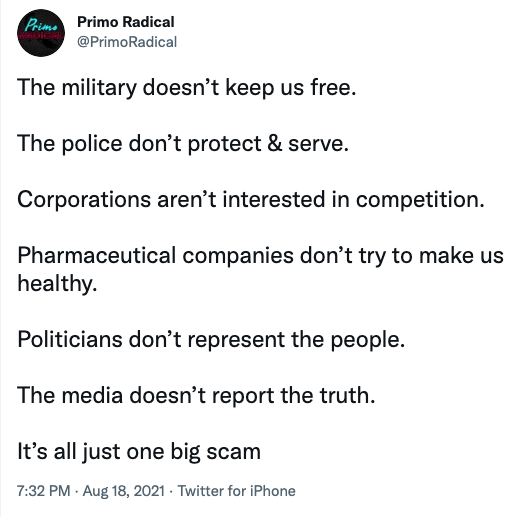 A perfect analysis, if not a bit on the obvious side. Of course the bigger problem is that all the scams are doing what all scams must inevitably do: collapse.
THE TECH DEVOLUTION HAS BEGUN 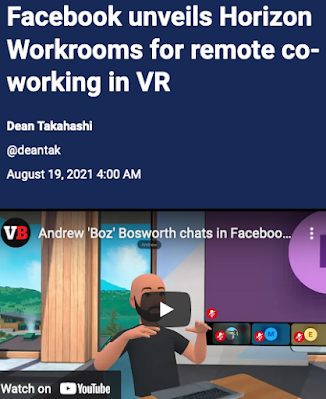 Hollywood and ridiculous CGI fakery (like the Boston Dynamics parkour and Watusi hoaxes) have done exactly what World of Tomorrow propaganda did in the 1930s: quell worker unrest by stringing everyone along with the techno-utopia carrot.
It's even more ridiculous today because the age technological discovery is over -- and has been for a while -- and the Technological Devolution has begun. At least there were still genuine innovations to come back in the Thirties.
Think about it: we have (alleged) trillion-dollar companies and the best they can come up with are glorified bottle-rockets (that can't even reach the upper atmosphere) and Second Life-vintage cartoon avatars? And has anyone asked if this latest scam has addressed the issue of VR sickness?
You can just smell the fear-stink and the flopsweat out there in Silicylon World. I'd be sympathetic if they weren't all so intent on destroying our economy, our industries and our way of life just to filch a few more pennies out of our purses. 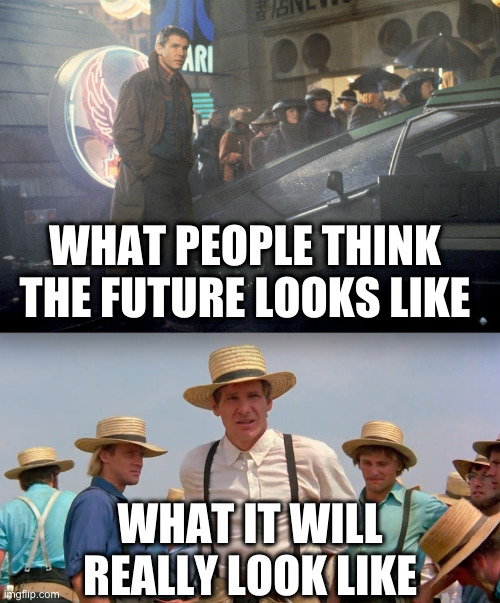 The fact is that our technological infrastructure is bloated and tangled to the point of incoherence. We have massive public utilities reliant on ancient software and millions of households reliant on wooden telephone poles. Believe me, I've had all too much experience with mass-scale power and internet outages for the past few years. I know all too well what's coming for the rest of the country.
We're also experiencing a catastrophic demographic implosion all across the industrialized world, to the point that thousands of schools will be shuttered in the coming decades. IQ is dropping and autism-spectrum disorders are exploding worldwide.
And just to plop the cherry atop the shit sundae, intersectionalist lunatics dominating the education system are conditioning today's students -- already rendered listless and unmotivated by technology and pharmacology -- that work ethics are patriarchal and math and science are racist.
So, tell me: who exactly do you think is going to fix all these very complex machines and systems we depend on and keep them all running?
Answer? Probably no one.
So is it really any wonder all these Big Tech tycoons are currently relocating to the South Pacific and/or inaccessible redoubts in the Rockies?
SO WHERE'S THE HOPE?
Well, for my money the hope is where it's been every single time an empire has imploded before us: in the power of rediscovering the spirit realm. In the power of people to turn away from the crass, crappy and commercial, and come together to cooperate. To stop trying to dominate Nature --  which is an utter and complete impossibility in the first place -- and to learn to live in harmony with it.
I'm not saying it's going to be easy. Not even a little bit;  trapped beasts like the current system are always most dangerous when wounded and cornered. They're not going out without doing their damndest to take a shit-ton of us with them. But the alternative is continue to drift along with the tide like flotsam, and that's a surefire recipe for horrific failure.
In the meantime, what you can do is seek after the spirits. They are most definitely real and out there waiting for you, when you're ready to take off the blinders and meet them on their own terms.  If nothing else, they'll help strip away a lot of that unnecessary fear and anxiety that's an inevitable side effect of living in an insane world.
Start at that foundation and build from there.
Like the man said, this is just a ride. A thrill ride in the coming days, to be sure. But you've been here before and you will be here again. The question now is how you choose to ride it out this time around.
Tell me your choice in The Den of Intrigue.