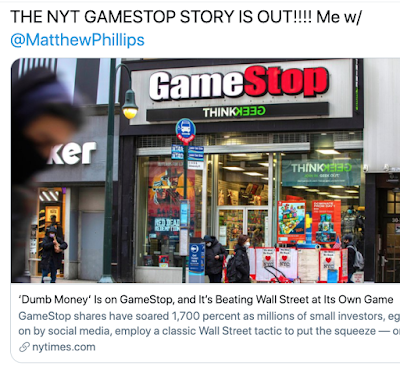 Once in a great while a big story comes along in which the symbolism is so obvious and self-explanatory that even the most oblivious normies can grasp it.
Since the early 1980s Wall Street and its satellites have been playing a game called "Loot and Pillage." You play by rigging the system, destroying lives and livelihoods and wiping entire industries off the map for a few quick bucks and a few cheap laughs. It's been unimaginably successful, only now the tables have been turned. The uprising will inevitably get quashed, but the confidence trick the finance racket has been playing all these years has been brought out into the open.
And that's what will cause the truly lasting damage.
This guy explains it all much better than I ever could
In case you haven't been paying attention (and good on you for that) a bunch of gamers on a Reddit board called WallStreetBets got a bee in their bonnet over some hedge fund pirates fixing to destroy GameStop, a struggling mall-based video game retailer, by "shorting" the stock, which is just another one of these parasitical grifts that would be illegal in a sane and just society.
Unfortunately, this kind of financial chicanery made people like Mitt Romney filthy rich, as well as a huge chunk of the donor class of the Congress. So it's here to stay.
That is, until all of this insane sorcery implodes the entire financial system, which it's already well on the way to doing. 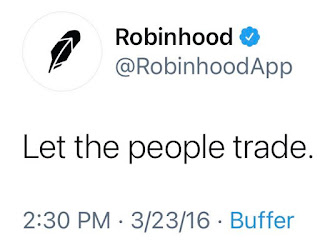 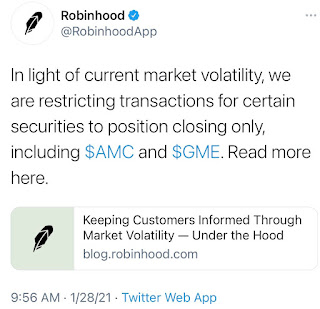 So with the symbolism of GameStop-- ie., "these games must stop" -- comes Robinhood, a retail investing firm whose egalitarian pretensions have been exposed as a joke. Turns out Robinhood is more Dennis Moore, which is a reference only geezers like me will get. Now it seems that Robinhood is going to have to pay for bending the knee, and I personally won't be buying them when their stock goes public.
Like I buy anything, but that's a conversation for another day. The System has gone to meltdown panic mode, and is wheeling out the usual Wall Street Wokeisms conjured up by their think-tank witch doctors after the scare they got from the Occupy movement. I doubt that will do much good.
Divide and rule identity politics were a sure bet during the Rowdy Roddy Trump era, but I doubt they'll survive the Ferris F. Biden regime. Too many oxen are getting gored. 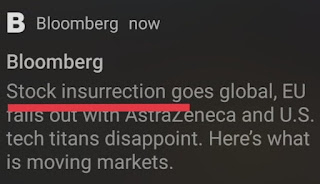 The reliably-treacherous Bloomberg News tried out some linguistic sorcery in an attempt to link this to the Idiots' Ball at the Capitol. 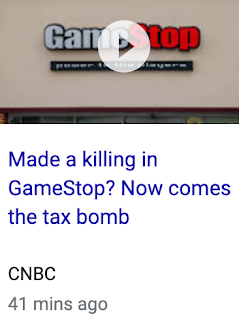 The Oligarch News Network tried using tax bills as a scare, like that's gonna worry someone subsisting on stimulus and unemployment table-scraps. 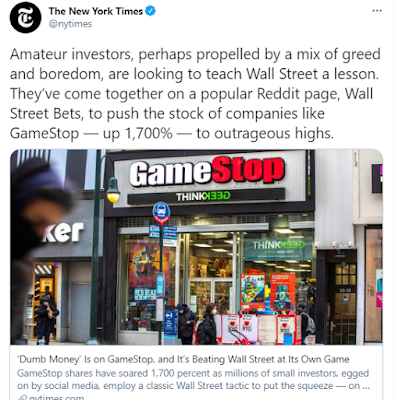 The Times goes for the oblique attack, but leads with the "Dumb Money" linguistic sorcery. Note the 17.
Wall Street's knee-jerk identity politicking is having a hard time scaring the proles in submitting, seeing as how the GameStopping has garnered support from a host of players across all kinds of spectrums. 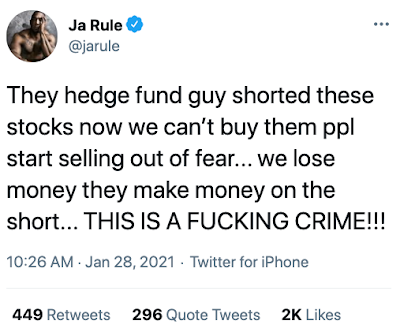 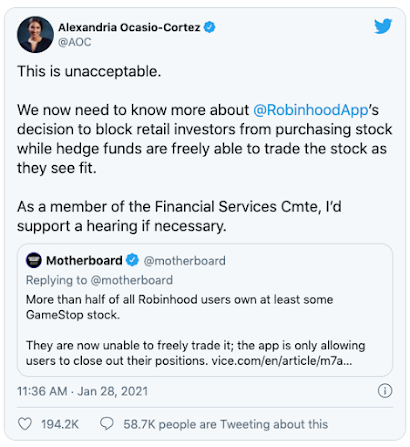 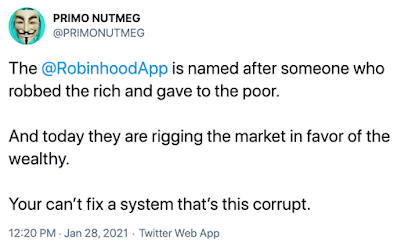 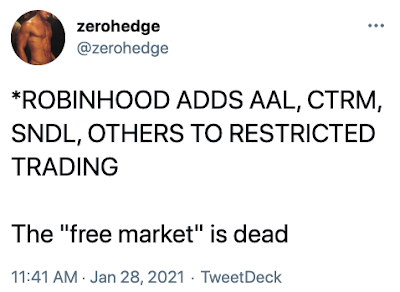 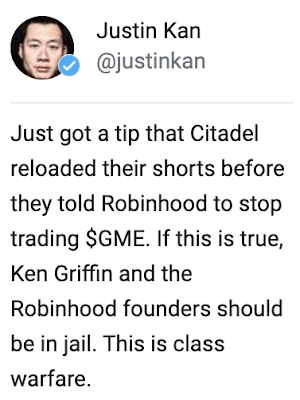 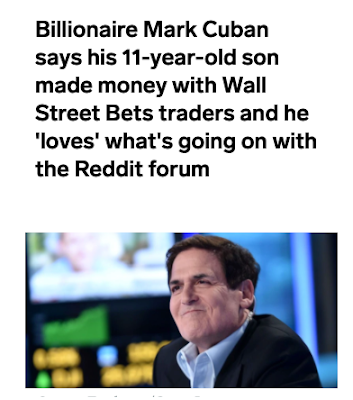 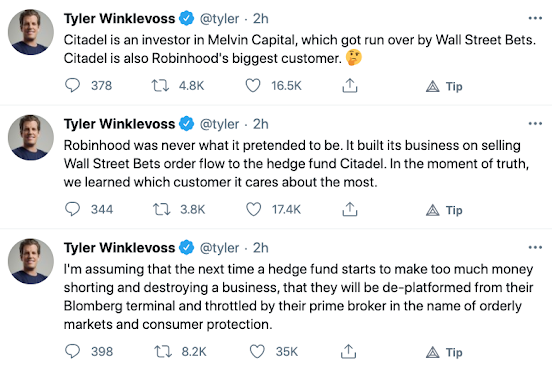 It's funny, Trump -- a lifetime hustler and game show host-- ostensibly put himself in the ring against the entire weight of the corporate/government superstructure and lost. But it was close.
Very, very close.
The Q movement-- a Boomer-dominated online LARP built atop old blog posts by bullshit artists like Benjamin Fulford, David Wilcock and Vigilant Citizen-- seems to have put a serious scare into the oligarchy and their media purse-puppies, wildly disproportionate to any actual threat they pose to the Establishment. Imagine how they'd react to a real insurrection.
I think the American Establishment in 2021 is like one of those cheap chocolate Easter bunnies you see in discount store check-out lines. The outer shell is brittle and hard but the center is hollow. The Establishment has built up an extremely formidable wall of defense around itself, but its promises, its rhetoric and the souls of its commanders are hollow and empty. There's nothing new about this-- it's how late-stage empires have always worked.
Trump, probably out of sheer spite, chipped away at the edifice but couldn't stick the landing. The current regime is working tirelessly to patch up the damage, but history teaches us that once breached, even the strongest sea walls eventually collapse. 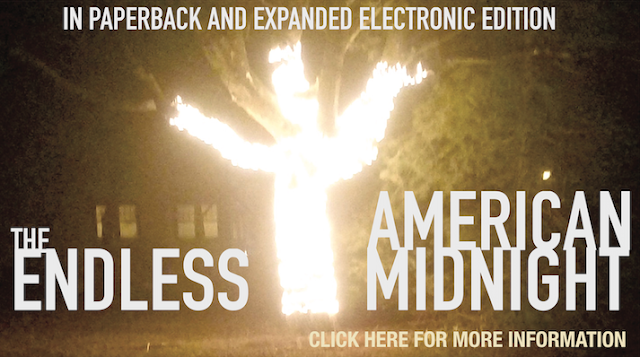