Temples of the Necropolis

Comedian and podcaster Eric Hollerbach was kind enough to take his Highway Diary up my way for a two-hour freeform throwdown on these very, very strange times we all find ourselves in. In order to set the mood, I took him to the Necropolis, which was in all its glory on a ten-best day of the year.
The spirits of the faithful departed were enjoying the breeze and sunshine while we dove headlong into all the madness and malicious mendacity we're all currently surrounded by. We were supposed to do an hour but we ended up doing two. Hell, I was just getting warmed up when Eric hit the pause button. Bastard cut my flow.
I have to say I had one hell of a good time gabbing with this guy. I think you'll enjoy it too. 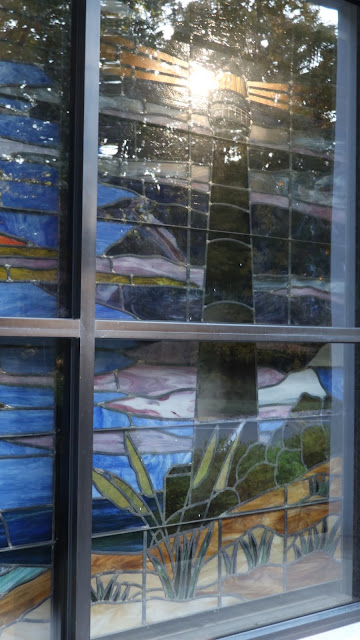 Afterwards, I took Eric on the ten-cent tour, showing him the subtle yet precisely-designed ritual spaces that the the Necropolis is filled with. The general theme is solar phallicism, with icons positioned to align with the setting sun, such as this hilariously-camouflaged dick-pic. This is behind the altar in the main chapel, and as you can see it perfectly catches the light of the sunset. 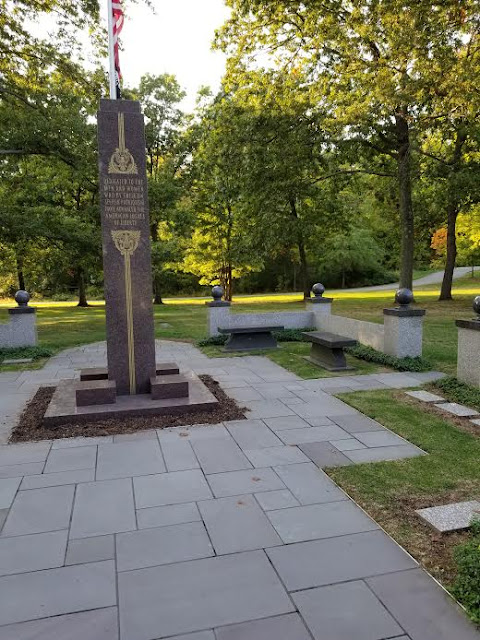 There's been some changes since I was there last. They moved the Armed Services obelisk and set up a kind of temple space around it, so mourners can now sit and adore the sacred phallus from all four cardinal points.
I should mention that the Necropolis is heavily populated with the earthly remains of US Military, Freemasons and Catholic clergy. In other words, our knighthoods. 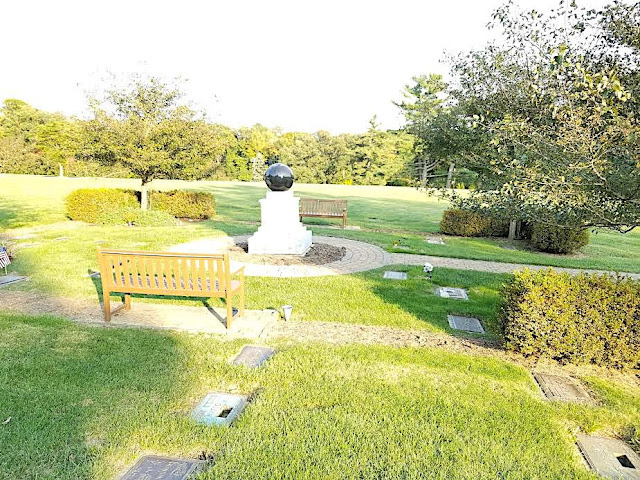 They've also set up benches around the black-marble-globe-sacred-phallus. I explained to Eric that this icon shows that the Earth is under the dominion of Saturn, as the ring indicates. I told him the Masons or whoever probably come up and do rituals around that thing when the place is closed.
This icon faces due north, which is where God's throne sits in Masonic temple rooms. Bonus factoid: Saturn used to be seen as the outermost planet and the gateway to the stars beyond, hence its importance to this very day among certain sects. 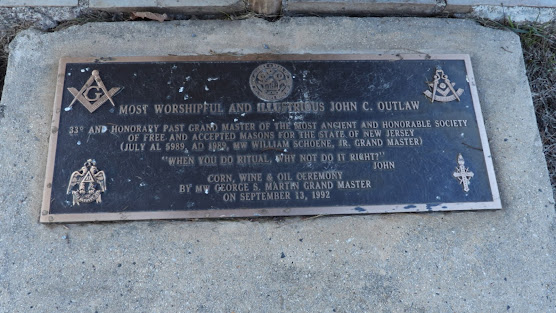 Just in case you think I'm reading too much into this, this is the headstone of the Masonic altar at the foot of the entrance road. Note the legend, "When you do ritual, why not do it right?" That sets the stage for all the rest of it (this is just a sampling).
They moved this altar to sit beneath a big old hemlock tree. I explained to Eric that Masons put sprigs of evergreen such as hemlock in the caskets of their fallen brothers during funeral rites. See, I know OCD when I see it.
There's a reason they chose this place to build their city of the dead and what are essentially small, open-air temples. It's an extremely powerful spot when it comes to spirit and earth energy. It also sits on the southern frontier of an old granite quarry with a small but very deep pond that's the most eye-raping shade of turquoise.
See, they put down these stone altars on these spots for the same reason people have done so since the dawn of time. They know these places are powerful conduits for sacred energy, and they want to tap into it. The same way the architects of Giza and Chartres and everywhere else you can name did.  And all those spirits of the dead act as the ultimate signal booster.
I don't need to tell you about how secret orders tap into this kind of energy and weaponize all that power. Meanwhile, the rest of us have unilaterally disarmed.
Funny old world, isn't it?
Tell me your world jokes in the comments.
at October 06, 2020