Now Don't Go Saying I Didn't Tell You. Because I Did.


Today marks the third anniversary of the start of the Apocalypse. Or at least it does for me.

Three years ago, Chris Cornell ("Horned Christ") swam to the Siren at the MGM Grand Hotel on the banks of the Detroit River, and consequences will never be the same.

In hindsight, it was all a grim foreshadowing of a more momentous drama involving MGM properties that would unfold nearly five months later, but we were still innocent of all that at the time, weren't we?

We all had a lot of growing up to do, and we did it together. 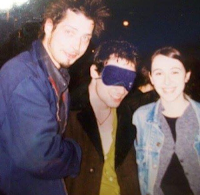 Cornell's death was also very near the twentieth anniversary of the death of Scotty J. Moorhead (AKA "Jeff Buckley") in Memphis, a fact I personally do not believe is coincidental, and neither do you.

And inevitably, Cornell's relationship with Buckley would draw him into the orbit of the Oracle of the Apocalypse, the Sibyl with whom Cornell shared a stage with during the 1996 Lollapalooza tour. 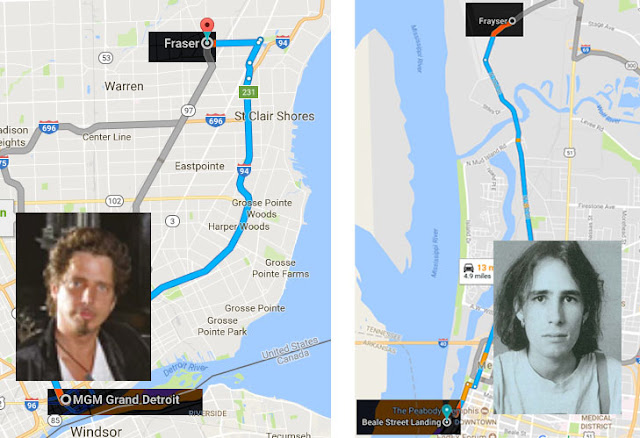 A fateful event indeed, given that both Cornell and Buckley died downriver of cities which share a name with the Voice of God, the chosen vessel of Saint Sophia. Or the reincarnation of the Cumean Sibyl, or both. Or both, and much more besides. All bets are off as far as I'm concerned.

Regular readers know there's more to this than can ever be contained in a single blog, never mind a single blog post. But given the chain react-syncs that erupted in the wake of the death of a rock star 20 years past his prime, I wanted to present you with a revised, annotated and cleaned-up version of a particularly insane post entitled "This is the Water: Twin Peaks, Roswell and the Siren's Song," just so we can get a sense of just how deep this rabbit hole goes.

Plot spoiler: it has no bottom. So come feel the deep with me, seekers...


Please tell me you're watching the new season of Twin Peaks. Like nearly everyone else my jaw is still on the floor after last night's episode. All the more so since it seems to very closely align with a topic I explored in great detail last year and that's the explosion of the atom bomb seeming to open some kind of doorway that allowed something dangerous to enter into our reality.

And whatever it is that crossed over seems to possess us and use us to its own ends, as we seem to be seeing in recent posts.

Lynch paints this picture in a way that simultaneously feels like a fever dream, Stanley Kubrick's lost masterpiece and some kind of bizarre MK Ultra conditioning session.

As we'll see, this episode drew heavily on the work of Leslie Stevens and Joseph Stefano's Outer Limits, so much so that it played like a tribute.

It's going to take time to sort through but this series seems like a oracle. It feels less like television and more like revelation. Lynch is tapped into something very deep, very dark and very important. 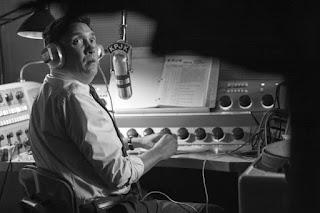 And it's only because of the conjunction of Chris Cornell's death and the return of Twin Peaks that I got thrown back down the Siren's well. I really thought I was done and good with the story but it so happened that the story wasn't done with me.

It wasn't until I started putting some of the pieces together that I began to see how Twin Peaks, Chris Cornell and the Siren's song have been locked in a spiderweb of synchronicity since the very beginning. (Note: along with UFOs).

Pay attention here- someone may be trying to tell us a story in the same nonlinear manner David Lynch is telling the new Twin Peaks. 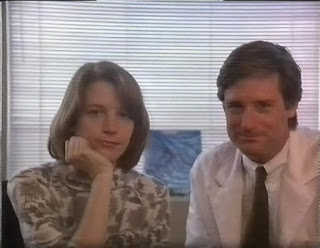 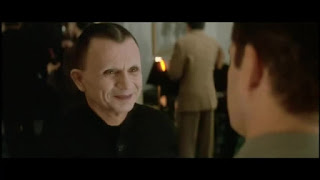 Bill Pullman appears in the David Lynch film, Lost Highway, which features Elizabeth Fraser's version of 'Song to the Siren'.

Still don't believe in the dark power of the Siren's Song?

In Lost Highway, Bill Pullman plays a musician falsely accused of murdering his wife, played by Patricia Arquette (who was cast as Jeff Buckley's mother in an unproduced biopic). Though never really explained it's implied that the Mystery Man, played by Robert Blake, is responsible for the murder.

In May 2002 - same month the Jeff Buckley biography Everyone Here Wants You aired on British television - Robert Blake was accused of murdering his wife, Bonnie Lee Bakely, in back of a restaurant in Los Angeles.


Patrick Fischler was also in
Under the Silver Lake

Just months after David Lynch's Mulholland Dr - a film about an actress (Naomi Watts†) who has her lover killed - had depicted a memorable scene about a looming horror in back of a Los Angeles restaurant.

Mulholland Dr was originally produced as a TV movie after Lynch made Lost Highway.

Blake was acquitted on account of there was no evidence to tie him to the crime, and the only testimony came from two stuntmen associated with Bakely's former lover, the convicted murderer Christian Brando.

Brando shot and killed his sister's lover at Marlon Brando's residence on-- wait for it-- Mulholland Dr.


The name Bakley belongs to the early history of Britain, its origins lie with the Anglo-Saxons. It is a product of their having lived in any of the places named Buckley, or Buckleigh, in England.

Patricia Arquette is featured in the Lost Highway's 'Song to the Siren' scene.

Arquette also stars in True Romance, which she plays the lover of a young man who is channeling Elvis Presley, who died in Memphis and whose statue overlooks the site of Jeff Buckley's death.

UPDATE: I was somewhat oblivious to this at the time but would-be Mystery White Boy star Reeve Carney co-starred with extremely high-frequency Frasenator Eva Green in Penny Dreadful.

Carney recently knocked 'em dead on Broadway's Hadestown, in which he plays Orpheus. This syncs him not only to Jean Cocteau but back to Buckley for reasons you should just take my word for for now. 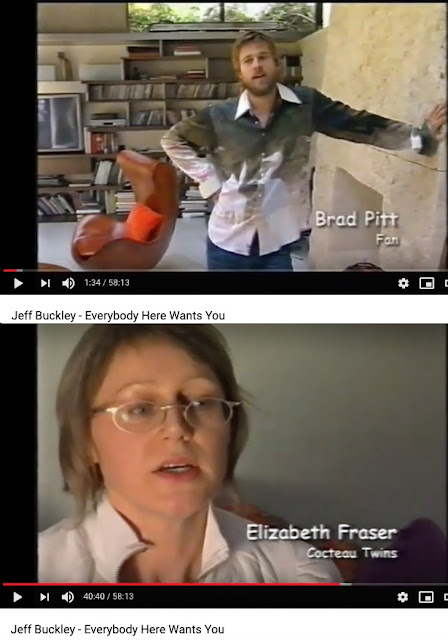 UPDATE: Many readers have noticed this coronavirus storyline from an old episode of The Dead Zone. What many might not realize is that the theme song for that series is a Jeff Buckley song.
+ + + + + + + + + + + 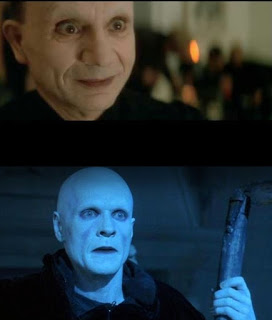 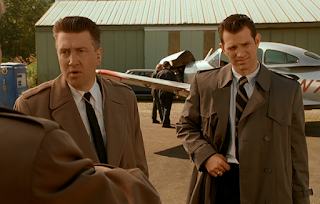 Chris Isaak starred in Twin Peaks: Fire Walk with Me, the franchise's last chapter until 2017. 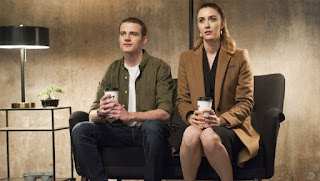 Ben Rosenfield appears in its next chapter. 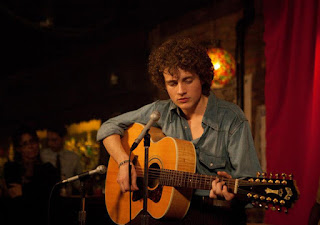 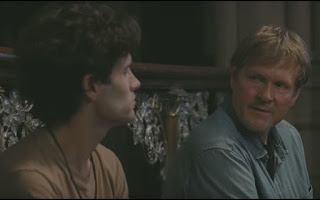 Roswell's William Sadler portrays Lee Underwood (the lead guitarist on the Starsailor version of 'Song to the Siren') in Greetings from Tim Buckley. 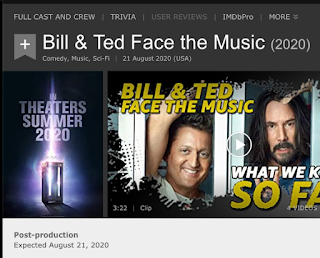 UPDATE: Sadler will be reprising his role as death in the upcoming Bill & Ted sequel. 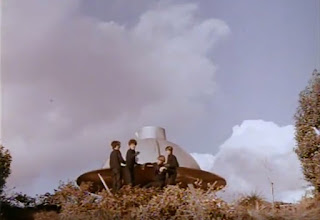 Tim Buckley's first public recording of 'Song to the Siren' first heard on the "Frodis Caper" episode of The Monkees, whose plot revolved around the capture of a flying saucer.

The 1994 TV movie Roswell revolved around the capture of a flying saucer in New Mexico.

This following right on the heels of another Area 51-connected news story, in this case a powerful sugar hiccup near the mysterious base. 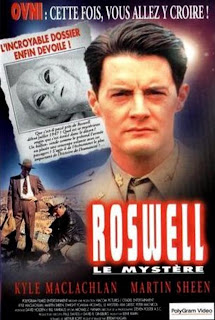 Roswell is a TV movie about the purported UFO crash in 1947 and starred Kyle MacLachlan, who portrays Dale Cooper on Twin Peaks.

UPDATE: Seeing as how this Navy UFO video story is relatively current, let's just remind ourselves of the symbology at work... 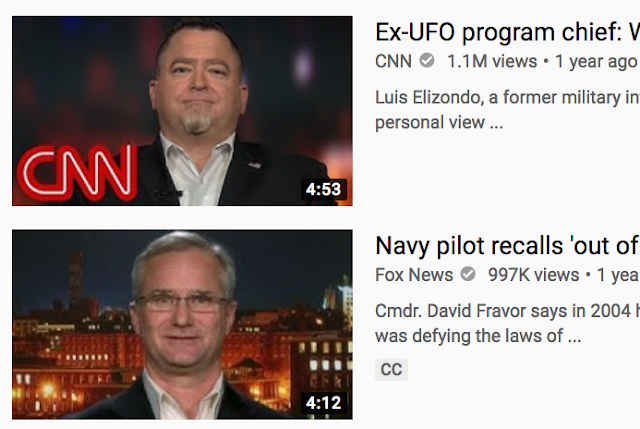 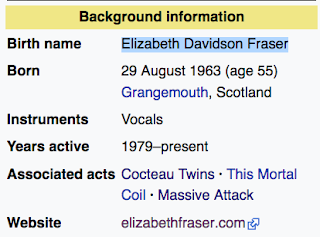 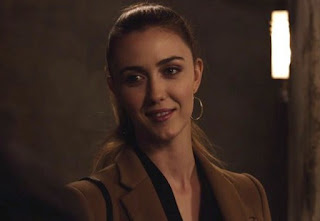 Agent Cooper emerges from the Black Lodge into a storeroom where characters played by Rosenfeld and Madeline Zima were last seen. 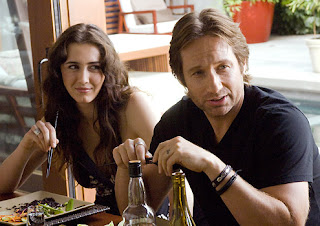 Madeline Zima starred on Californication (itself loaded with Siren symbolism) alongside David Duchovny. 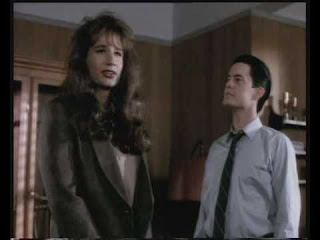 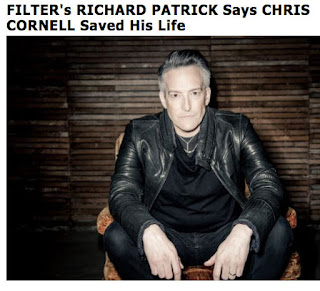 Duchovny would later be replaced on The X-Files by Robert Patrick, brother of original Nine Inch Nails guitarist Richard Patrick (whose band Filter recorded the rock theme for the first X-Files movie).

Robert Patrick first appears on  same X-Files episode 'Scully's Theme' first heard, which was based in part on Elizabeth Fraser's 'Song of the Siren'. 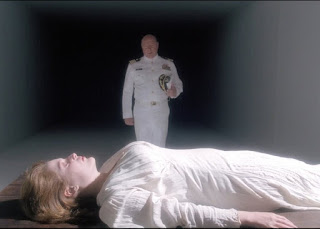 Davis's first appearance on The X-Files was in 'Beyond the Sea', which also guest-starred Brad Dourif. 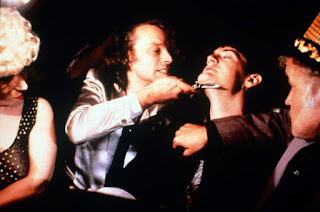 Brad Dourif appeared in Blue Velvet, the film where Lynch tried and failed to secure rights to Elizabeth Fraser's version of 'Song to the Siren'.

That film starred Laura Dern, who also appears on the new Twin Peaks.


Dourif also played the Gemini (Twin) Killer in Exorcist III, released exactly a month before Heaven or Las Vegas, and in the same month as the 'Iceblink Luck' single, which syncs to Tom DeLonge and the Navy UFOs. 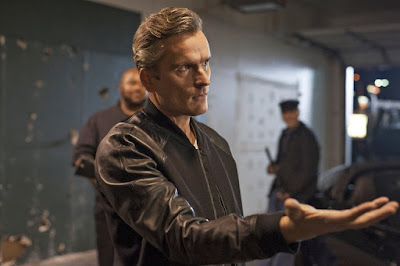 
UPDATE: The Getty family made the news in the period following Chris Cornell's death with the fires plaguing the City of Fallen Angels, which seemed to target the Getty Center on a number of occasions.

Considering that both Los Angeles and the Getty Family are yoked to the service of Hell, it's anyone's guess what's behind that.

Note that Kevin "Little" Spacey played Balthazar Getty's grandfather in All the Money in the World, before being replaced by Christopher Plummer.

'Song to the Siren' was produced by John Fryer, who also produced the prophetic Head Over Heels album.

David Bowie appears in Twin Peaks: Fire Walk with Me.

The Nine Inch Nails' album The Downward Spiral was released the same day as Soundgarden's Superunknown.

Trent Reznor appears in 2014 documentary Beautiful Noise, about Cocteau Twins and the movement they inspired.

Nine Inch Nails and Soundgarden toured together in 2014. They opened the tour in Las Vegas.


Downward Spiral, which was recorded at Manson-massacre house 10050 Cielo Drive, features a sample from the original Texas Chainsaw Massacre on the song 'Reptile'.

Texas Chainsaw Massacre's 2003 remake features a cover of Elizabeth Fraser's cover of "Song to the Siren."

David Bowie and Trent Reznor sang "Reptile" as a duet on their 1995 tour.

Three days before Downward Spiral released, Jeff Buckley and Elizabeth Fraser began their love affair in Atlanta, sparked by Fraser's version of 'Song to the Siren'. 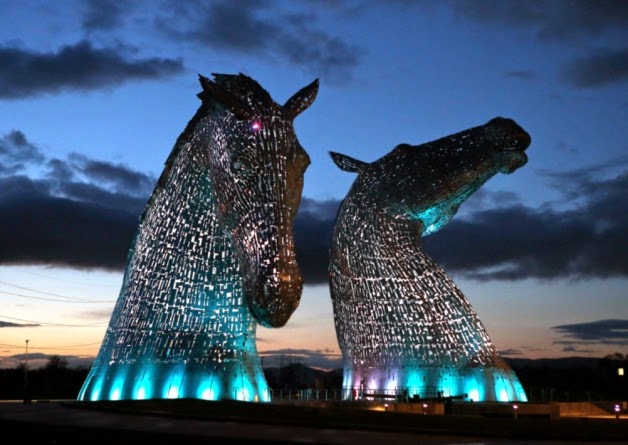 Elizabeth Fraser is from the Falkirk Council area of Scotland, which boasts two enormous statues of the Kelpie, the Scottish version of the Siren, which shapeshifts from horse to human.

Falkirk is a half-hour's drive from Rosewell, the town that borders the Rosslyn Chapel. 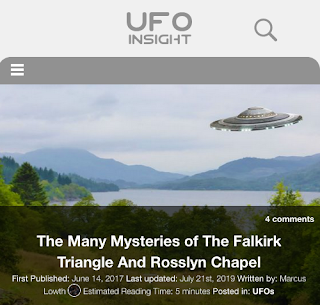 Update: Like Roswell, Falkirk is a known Mecca for UFO buffs. 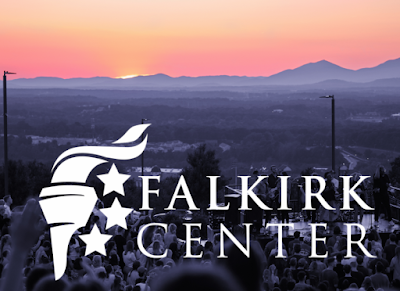 Weirdly, the heir to the old Moral Majority organization is called "The Falkirk Center."

There's locusts in her honey mouth

In the final scene of Episode 8 of Twin Peaks: The Return, a young girl is mesmerized by a demon who chants an incantation that wouldn't sound out of place on Garlands:

"This is the water and this is the well.
Drink full and descend.
The horse is the white of the eyes,
And dark within."

Like the Sirens and the mermaids, the entity seen here is a chimera of a frog and a locust, both plagues that Moses brought down on Egypt in Exodus.

Elizabeth Fraser's only solo releases are the singles, 'Underwater' and 'Moses'.

The girl in Twin Peaks is played by Tikaeni Faircrest.

After the girl is possessed you hear horses in the desert. Or perhaps it's just the Kelpie.


UPDATE: Locusts have become a major news story in the past year.


• Blue Velvet released, includes 'Mysteries of Love', song written when Lynch was unable to license 'Song of the Siren'.  September 1986

• Lynch's Wild at Heart is shown at Cannes. Laura Dern stars. May 1990

•  Superunknown by Soundgarden and The Downward Spiral by Nine Inch Nails released March 8, 1994

• Elizabeth Fraser records 'Teardrop', a love letter to Jeff Buckley, same day he drowns in May 1997

• Elizabeth Fraser appears in London July 23, 2017 to talk about Blue Bell Knoll, whose title refers to a death knell from Scottish fairy lore.


Just a little refresher for all my wonderful readers out there wondering whether we're still in Kansas anymore...

ANYONE WITH A ROADMAP, PLEASE SHARE DIRECTIONS
IN THE COMMENTS SECTION 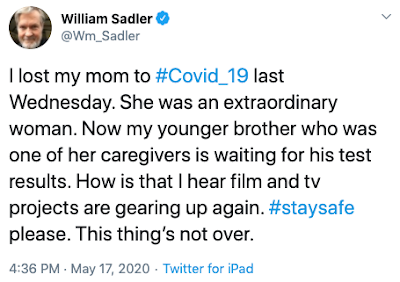 From my favorite post-Soundgarden metal band, as I was working on this post... 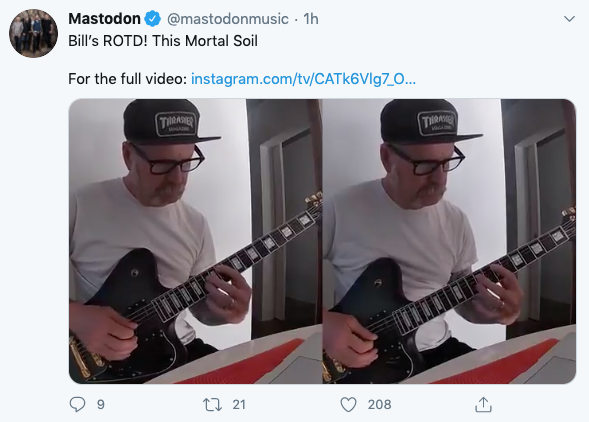