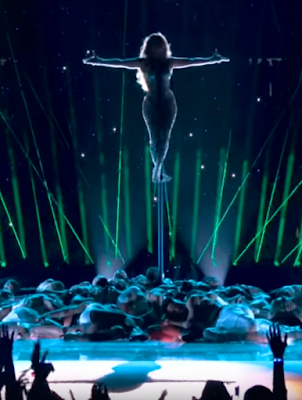 There's a reason rituals fall out of favor: they really get to be exhausting after a while.

There was such a spate of mass rituals following on the Gotthard Tunnel production -- or the 2012 Olympics, if you want to trace it back to when things really started to get out of hand -- that it's just becoming a chore to keep track of them all.


I was feeling really exhausted during last year's Super Bowl but this one I could barely raise my head from my chest. Mind you, I am very, very pleased that the Secret Chiefs beat the Cylon Francisco For-the-Nines -- since humanity wins whenever Cylon Francisco loses -- but I feel like football fever peaked a while back. I'm from New England so you probably can figure what team I root for, but even I was sick of seeing the Patriots in the SB.

Either way, when I heard that Shakira and JLo were doing the halftime show, I was hoping I'd somehow time-slipped back to 1998.

Mind you, they both look quite lovely for their years and certainly seem to have plenty of gas left in the tank. But the whole act was just a bunch of huffing and puffing with zero artistic or symbolic content to pick through.

I heard some rock guys complain about using those two in the show and a lot of other people complain it was just a softcore burlesque show, but that just proves they don't understand the archetypal underpinnings at work here. It goes back a long way: you'd always want your harem girls and your eunuchs to cheer on your gladiators, not your Korybantes.

You save those for more darker, more intimate rituals. 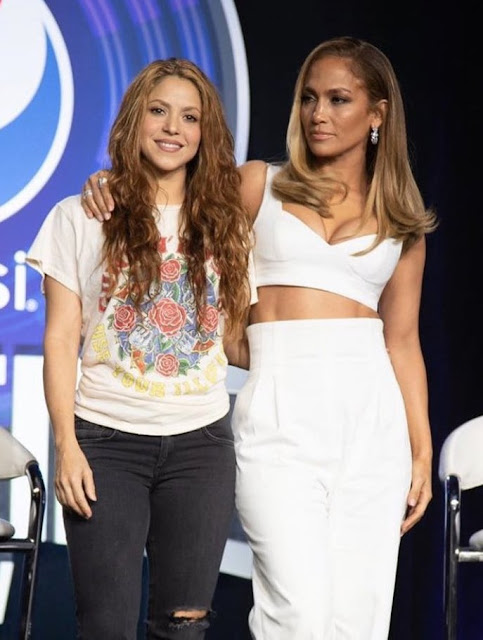 I did notice JLo's act flirted with some Siren imagery (and sound design) for a short spell but then immediately segued into one of her tuneless bomps. It didn't escape my attention that JLo recently put out the most Secret Sun video ever made and that we had Justin Timberlake doing some serious Shepherd Boy resonating last year, but it's all so carelessly executed it feels a bit like flat, lukewarm soda to me.

As for the Twidiots trying give this striptease act a feminist woke-wash, all I can say is welcome to 2020.


I think the rote tedium of the Bowl infected the rest of the week's rituals. Like the make-believe Iowa caucuses, in which we LARP that we're still a nation of farmers and citizens, not just disposable cogs in a post-industrial nightmare world.

However, that particular balloon was popped when some serious software shenanigans were rolled out in a last-ditch attempt to keep Bernie Sanders from winning the nomination. The establishment candidates--- particularly Warren and Biden-- have proven themselves to not be up to the rigors of the campaign trail and their stars have quickly faded.

But one thing must be pointed out: the frontrunners are all really, really old. I'm getting old too, so I remember when you had a bunch of greenhorns no one heard of running around the cornfields out there after Gary Hart crashed and burned. But it's no wonder that the Democrats can't seem to get behind any of these people. They all look like they should be playing bridge or Parcheesi in an assisted living facility outside Miami Beach.


Which seems to be why Silicylon Valley and other Democratic super donors are trying to make this empty suit happen. The software fuckery seemed to a lot of the Berniebros and Berniebabes to have been designed to boost this guy's candidacy, and pretty much all of them have said that they're staying home if Sanders isn't nominated.

I'm noticing that a lot of Democrats really seem to hate this neoliberal sockpuppet, only proving that the super-donors live in such a bubble that they have no clue what their voters really want, never mind the independents they desperately need to beat Trump. 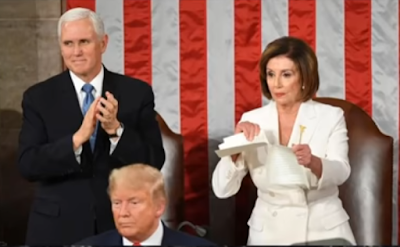 The next ritual on the calendar was the State of the Union, which the Cut-Rate Joan Collins AKA Nancy Pelosi (net worth $150M) made all about her when she made a big show of ripping her copy of the speech at the end of it.

That got her a lot of "Yass Queen Slays!" on Twitter, but will probably come back to haunt her later in the year. Regular people are really sick of that shit, even a lot of Democrats. 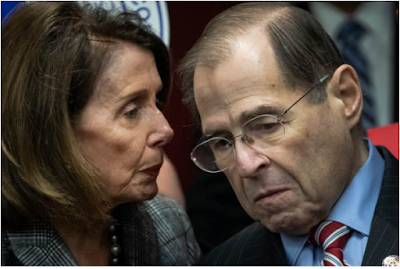 Which got me to thinking: for a party owned and operated in large part by Hollywood and Big Media, the Democrats are really crap with optics anymore.

From JFK on, they used to try to project a vigorous, youthful image. But now they're led by a lot of very old and extremely untelegenic people. It's not like Trump or Mitch McConnell are a couple of Brat Pack teen idols either, but they're not trying to present themselves as the party of the future.

I blame the Boomers, who never seem to retire. I also blame U2. I blame U2 for the coronavirus, too. Plus, everything else. 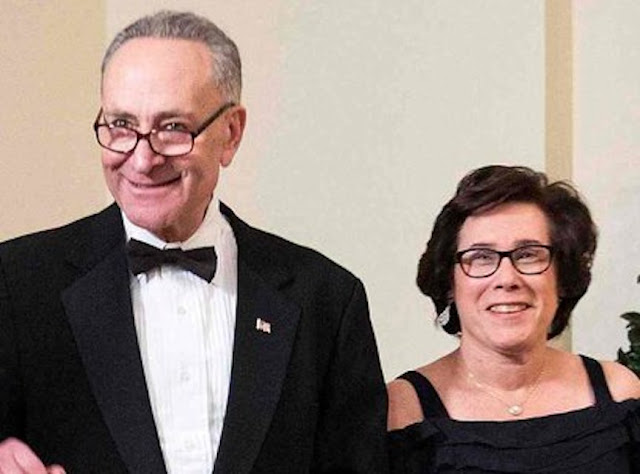 Aside from Joan Collins Jr. and Curly Joe Nadler up there, the tetrachy is completed by Smarm-King Schumer, who I never could stand.

FFS; Where are all the stars in this party?

It's like the fifth-stringers have totally taken over. It's kind of like going to see some 80s band you kinda liked a bit in high school and finding out it's just that drummer who replaced the original drummer and a bunch of sad, talent-challenged also-rans who sound absolutely nothing like the originals.

Is it any wonder no one but the most diehard partisans gave two shits about this whole impeachment ritual? What exactly was the purpose of it? Where was all the drama, the pathos, the white-knuckle suspense, the shocking revelations?

I have to say it was all very poorly written and produced. Kind of like any Simpsons episode written after 1997. Or like that last season of Seinfeld after Larry David quit. No wonder Nancy Pelosi was so tetchy the other night.

Is the spreading collapse of competence reaching the Dems' media wizards now too? We already talked about the half-hearted attempts at charging this whole fiasco with some much-needed juju, but they seemed to bellyflop too.

I guess Adam Schiff is the party leadership's youth wing, but he does TV even worse than the rest of them. I don't know what it is, but he always looks like a Cub Scout leader being frog-walked to a protective custody cell past the local media. Clue me in: was he just the fall-guy in this little exercise? A "flak-catcher," as Tom Wolfe might have put it?

And what the motherfuck is all this Ukraine shit? I thought we were all about punching Nazis these days...

...not arming them to the teeth and laundering hundreds of billions through their little Reich over there.

I mean, you do realize that the Ukrainian government IS FULL OF LITERAL, HONEST-TO-GOD FUCKING NAZIS, right?

What bizarro world is this where the Democrats shriek that anyone to the right of Pol Pot is a Nazi one minute and then go glory-hole a battalion of real, in-the-flesh Nazis the next?

I want out of this timeline and back to reality. I blame the blue check-mark. I mean, the actual symbol. 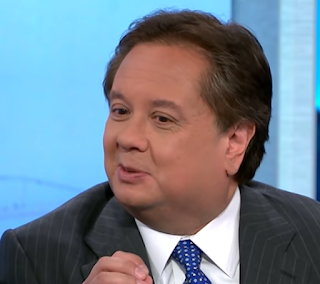 I mean, Twitter has really been cancer for the Democrats and their media organs. Sure, any pretense of objectivity was flushed a long time ago, but I didn't think the pretense of sanity would shatter into molecules.

I realize there are some serious economic and career anxieties at work here, as well as the usual lingering traumas of being picked last in gym class, but I really think all of these people need to get off social media immediately. And then scrub their archives.

What the fuck is Chaz Conway here doing on CNN every five seconds? And don't get me started on their wife, either. Or any of the other ghouls on these shows. Though I must admit Van Jones is one smooth motherfucker. Guy's got serious style, unlike the rest of the stayed-home-on-prom-night crowd surrounding him all the time.

But my holy hell, already: what the living fuck is this squeaky-toy doing on my television screen?

Does it have incriminating footage of Jeff Zucker at a petting zoo or something? I've never been more disturbed by something on my TV since The Brady Bunch Variety Hour went off the air. I've seen trauma-surgery videos that are less repulsive than this thing. Do they keep him on TV so he won't become a serial killer or a mall shooter or something?

And listen, don't think for a minute it's the people's will or anything... 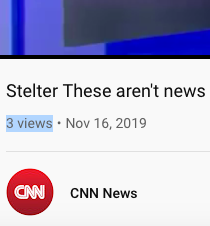 ...as witnessed by the metrics here.

I don't get it, I really don't. Love Bill Clinton or think he belongs in prison, but don't say he didn't do great television. Bubba and Barack Obama were so successful because politics is essentially about optics. Why do you think Ted Cruz grew a beard?  Sure, Trump is a crusty old Boomer too, but he was a frickin' game-show host for a decade and change, remember? He knows how to make it work for him.

I guess this is what happens when the rites and the rituals become rote. Only the real lifers are willing to stick around and go through the motions.

Sadly, it's a bit less metaphorical than that now.