Addenda: The Mysterious End of Kurt Cobain, Twenty-Five Years On


Kurt Cobain's body was found twenty-five years ago today at his home in Seattle. It was a landmark event for the culture at large, but perhaps in the future it will be seen as a Synchromystic landmark as well.

Eldon Hoke has a very interesting story to tell. Unfortunately, he "died mysteriously" just days after telling his story to British journalist Nick Broomfield for the documentary Kurt and Courtney.

So he can't tell anyone his story anymore.


Courtney Love's father Hank Harrison has a very interesting story to tell, too.


As does the professional investigator Love hired to "find Kurt" when he "went missing." He's been on the case ever since.


But Kurt wrote such depressing songs! His lyrics were his suicide note. Just like, um, this guy.

Of course Courtney wrote all of Live Through This. Listen to that incredible talent, live and in the raw. It's like Joni Mitchell or Patsy Cline or somebody.

She only hired outside songwriters after Kurt died because they were artists she respected and wanted to share her genius with.

Tomorrow truly belonged to Courtney, especially after she lost her beloved Kurt. She is the Avatar of our Age, whether the world acknowledges it or not.


IT WILL NEVER END. ADJUST YOUR WORLDVIEW ACCORDINGLY

Aberdeen being a city in Scotland.

Oh, guess who made their US TV debut the day Kurt's body was found?

Need you ask? Guess what city they played that night?

Sadly, Our Lady was in meltdown-mode on this leg of the tour and was sounding a bit more alien than usual. Was this because she was traveling with a certain young Shepherd Boy by her side, and could sense his ultimate fate?

Her performances were quite different before Our Lady met her consort in Atlanta in March. But still; unbelievable vibrato. Otherworldly, even. 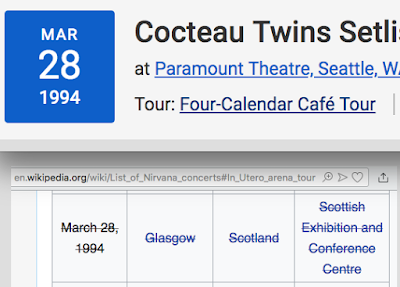 Bonus Sync: The Twins played Seattle the same night Nirvana were scheduled to play their only Scottish date on that tour.