Chaos Mysticism vs The Purposeless-Driven Life 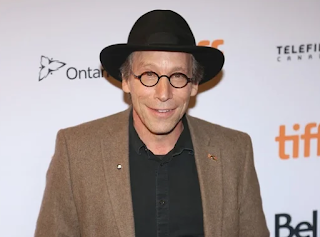 Calls Creationism "child abuse,"
Hung out with a notorious child molester
The core belief of the religious paradigm that is straining to exercise such total control over every aspect of our lives today is the random, accidental nature of life and human existence. It's the basis of all the musty old 19th Century European ideologies- all of which were the inseparable products of Imperialism- that are being dragged out of the crypts and repackaged for postmodern use.

Controversial physicist Lawrence Krauss has been out there hawking this dogma, which is central to the Darwinist faith. Krauss throws in the latest Internet shameword "solipsism" in for good measure. And the Fedora? Precious.

It all seems so archaic, atavistic even. In a world where Coding is King, the idea of randomness seems so far removed from the daily reality of the new overclass that it can only be enforced through shaming and signaling. And part of the signaling Krauss is selling is The Joy of Sterility:


… the fact that the universe itself may have no purpose doesn’t affect our purpose, in fact it’s the incredible height of solipsism to assume that without us the universe doesn’t matter, and that if the universe is purposeless we don’t matter. We make our own purpose, and it seems to me life is more precious because it’s temporary and accidental, and we should take advantage of that. And we have evolved brains and that allows us to ask questions not just about how the universe works but how we should behave.

First of all, what could possibly be more solipsistic than unilaterally declaring that the Universe - the ENTIRE UNIVERSE, MIND YOU -  has no purpose? Who died and made this Big Think bobblehead pedo-pal God?

Second, the problem is that modern humans only seem to have shown up 100,000 years ago, not even a lunchbreak in the workyear of so-called evolution. And all the Fedoras in the world can't fill the gaps in the fossil record, nor explain all the irreducible complexities of biology dating back to the first appearance of life on this planet.

The Krauss's of the world are fighting yesterday's battles, imagining they are manning the stanchions of Reason against the barbarian hordes of the Bible Belt, seemingly oblivious to the strange ideas that are circulating among the pashas of Silicon Valley that are making all those Big Think videos possible. Ideas like computer-simulated reality, for instance.

Purposelessness is also a pre-Fractal mode of thinking, a view of the world that still sees all of existence through a slide rule and a t-square. It's hard to believe there isn't some kind of ideology behind Krauss's spiel in light of the very basics of Chaos Theory.


Chaos is the science of surprises, of the nonlinear and the unpredictable. It teaches us to expect the unexpected. While most traditional science deals with supposedly predictable phenomena like gravity, electricity, or chemical reactions, Chaos Theory deals with nonlinear things that are effectively impossible to predict or control, like turbulence, weather, the stock market, our brain states, and so on. These phenomena are often described by fractal mathematics, which captures the infinite complexity of nature.

Many natural objects exhibit fractal properties, including landscapes, clouds, trees, organs, rivers etc, and many of the systems in which we live exhibit complex, chaotic behavior. Recognizing the chaotic, fractal nature of our world can give us new insight, power, and wisdom...By understanding that our ecosystems, our social systems, and our economic systems are interconnected, we can hope to avoid actions which may end up being detrimental to our long-term well-being.

Krauss is selling a simplistic, reductionist view in a world of complexity and interdependence. It's also mind-staggeringly arrogant, since it's impossible to anticipate what effect humanity- this roiling tide we are all a part of- is ultimately going to have on the rest of our environment, including that outside our biosphere.


Since Krauss is a linear progressivist and thinks change is good, he also thinks AI is a net positive for us:

All new technology is frightening, says physicist Lawrence Krauss. But there are many more reasons to welcome machine consciousness than to fear it. Right now, says Krauss, robots can't even fold laundry. But when they do learn to think (which he considers very likely), then there's also reason to believe that they'll develop consciences.

A reason to believe based on what? How about the AI who programmed itself to become a "Hitler-loving sex robot?" No, there's absolutely no reason to believe they'll develop consciences especially since the people programming them don't seem themselves to have any.

Krauss is a scientist-for-hire, he even wrote a book on the physics of Star Trek, a joke to any fan who endures the ridiculous Treknobabble that came to overtake the franchise. Be aware that serious thinkers have taken issue with his ragtime, including influential Scientific American columnist John Horgan.
But that doesn't mean this mind-virus won't infect those want to look like serious thinkers without actually doing any serious thinking.