I wanted to make note of this remarkable video, from the popular Film Theory YouTube channel. It took a while but the message I was trying to put across several years ago seems to have finally sunk in here.

And that is behind the disarming velvet glove of Star Trek's seductive techno-futurism and idealistic multiculturalism is the iron fist of militaristic totalitarianism and expansionist imperialism.
Here's what I wrote back in 2008:


The Federation is ruled by an Assembly and a High Council, a very large number of whom seem to be Starfleet admirals. The Council reminds you not so much of a democratic assembly, but more of the leadership you would see in a rigid, hierarchal organization like the Freemasons or the Jesuits.

Under the smiley veneer of humanism, politically correct pandering and New Deal-vintage liberalism, the Federation certainly feels like a socialist military dictatorship. At the core of the Federation and at the core of Starfleet is the presence of a expansionist philosophy (the Federation must grow to survive) and a Masonic, heirarchal world view.

And these stories are all told exclusively from the point of view of elite military officers on spaceships armed with world-destroying arsenals.

To be fair, Star Trek writers began to address the Federation's inherent imperialism after Roddenberry died and was no longer around to veto scripts that ventured out of the repressive "Roddenberry Box."

Deep Space Nine, developed over the objections of Roddenberry and his wife Majel, was especially willing to commit grand acts of narrative heresy when dealing with the yawning paradox of a series originally based on an ostensible exploration mission, albeit one undertaken in a warship outfitted with high tech weapons powerful enough to destroy entire planets.

I've been studying the development of Star Trek and its early history in further detail and it's leaving me with more questions than answers.

According to two of the key players in the show's development, Desilu executive Herb Solow and producer Robert Justman, NBC didn't like Gene Roddenberry's work very much, were deeply uncomfortable with his sexual adventurism (NBC didn't want to cast Barrett as Number One because she was a woman, they didn't want to cast her because they knew she was one of his favorite mistresses) and were stymied by his presentations.

Sci-fi had no track record in prime time but NBC still were willing to bet on Star Trek, as were Desilu, who invested a lot of money in the pilots.

Even after failing as an animated series, Paramount (who bought the show when Desilu closed up) continued to push for a new series- with Roddenberry at the helm- largely thanks to the original series' success in reruns.

Roddenberry clashed with nearly everyone he worked with, and caused the first film to go wildly over budget and schedule, but was still handed the keys to the new TV series in 1986, even though he needed to be rehabbed of his drug and drink addictions before he was able to work.

A charmed life, to be sure.


And Deep Space Nine also seemed to prophesy the current nightmare we are living, with tent cities of the homeless popping up in major cities across the country, right on DS9's timeline.

And as we saw in "Past Tense," the homeless live amongst the wealthy and carefree technocracy of San Francisco, terrorized by goon squads and worse. Yet with automation threatening to put more good-paying jobs on the chopping block, the problem only threatens to get worse.

And of course the Star Trek timeline has it that all of this will be followed by a devastating world war, one that seems to be on the to-do list of the ruling class in Washington.

Of course, we missed the Eugenics Wars in the 1990s, so there's hope for us yet.
SMOKER
I don't know how I missed it- maybe it hadn't been listed on the iMDb page until recently, but Leslie Stevens actually wrote a pilot for Desilu starring one of the Captain candidates, Lloyd Bridges, who would re-enter Stevens' orbit when he guest-starred on Battlestar Galactica in 1978.

This is the smoking gun that nails down Stevens' involvement in developing Star Trek for/with Roddenberry, on top of all the Daystar people who'd go to work on Trek and the eyewitness account that Roddenberry had basically set up an office for himself at Daystar while working on "The Cage."

Stevens- who was running his own production company at the time, mind you- obviously had some kind of deal with Desilu, and helping Roddenberry (a sci-fi novice, despite later claims to the contrary) was part of the package. 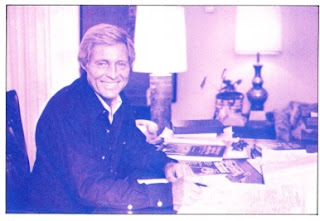 To show how different Stevens' sensibility was from Roddenberry's, here's the series he was working on while Roddenberry was glorifying the military in The Lieutentant (with future 2001 star Gary Lockwood).

Stoney Burke starred yet another Captain candidate (Jack Lord) as a rodeo star who finds himself dealing with small-town corruption. It was a remarkable series and featured some truly outstanding writers and actors (like Robert Duvall, who'd also show up on a crucial Outer Limits two-parter with future Trek guest-star Steve Inhat).

This episode features the late, great Diana Hyland- who we'll meet again soon in Uncle Sam's Secret Sorcerers- in a powerful story that gets very dark. Maybe too dark for the time. But damn if it doesn't feel like Gene Roddenberry was watching this particular episode carefully too.

You'll see what I mean if you stick with it.

Speaking of sorcery, it's a fair bet Stevens used his Trek payoff to make Incubus with William Shatner, one of the most insane projects (a working, really) ever undertaken by a producer of Stevens' stature (whose hit Broadway plays had just been made into films starring major stars like James Mason and Charlton Heston).

He'd take a break from his work at Universal to write his book on "electronic social transformation", which feels as much like the creation of cyberpunk as it does 70s SRI/Valley-type techno-Age.