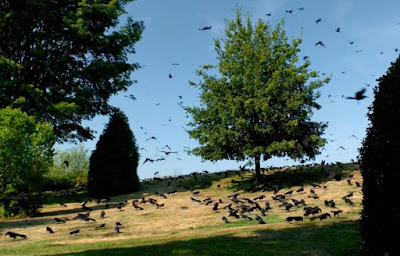 I began writing Our Gods Wear Spandex on September 11, 2001. For some reason I can only ascribe to my Holy Guardian Angel, I wasn't in the WTC PATH station around 9 AM that morning. I actually had been for most of the summer, working in-house for a production studio on Lafayette Street in Lower Manhattan, doing storyboard work.


On the weekends I was also in the neighborhood, on South End Ave, to be precise, working with my friend on a spec screenplay, a project that also didn't seem to turn out too well. So the World Trade Center was a huge part of my personal psychogeography in the summer of 2001. I still picture myself coming up that escalator into the concourse, and feel the cold radiating from the concrete walls.

I slept in that Tuesday, probably working late on a job the night before. My wife was home with our new baby and woke me up to tell me that the third world war had begun, ending what had been one of the most productive and pleasant years of my adult life a bit early. But it could have easily been the end of my life, period.

Suddenly I realized there were omens and portents to sort through. My best friend had called me the day before to tell me that his cancer had returned, the cancer that would end his life shortly after. His name and address were highly significant in this, as it turned out.

Synchronicities began to present themselves in such a way that would not allow me to ignore them and the sudden stoppage of my freelance work and a new computer with a faster modem (we were still on dial-up) all conspired to change the way I saw the world and my place within it.
Long before I knew anything about anything I had a sense of a protective force in my life. I have a lot of stories to tell about that, which I'll try to address in future posts. But this force was so potent and present to me that my first serious writing project was about a guardian angel. It was a primitive approach to the issue but also an approach that was easily understood. More sophisticated occultists refer to this as their HGA, or Holy Guardian Angels. A hell of a lot of magic throughout the ages has been dedicated to invoking them or similar protective spirits.
But what happens when these spirits try to communicate with us but we don't understand the message? Or don't have enough information at our disposal to act upon these communications? This is a serious question, one which I believe will become extremely important as the world grows increasingly more dangerous.
But if you really want to get down to it it all really began while I was at my grandmother's house in 1971, waiting to go to church and picked up one of the comics my uncle got at the pharmacy. Things were not going well. My parents had recently divorced and my mother's career as a musician- while setting the scene for an interesting and colorful range of experience- left us hovering over the poverty line. Worse still, I was in and out of the hospital on a regular basis. There was more besides, but let's just say that my childhood idyll was well and truly over.

That comic in question was The Witching Hour, and featured a story I ran here, about a young occultist battling to regain possession of a magical talisman he'd lost in his youth. Talk about predictive programming. But what really caught my eye was the ad screaming "The Magic of Kirby" and showcasing the covers of the premiere issues of his Fourth World titles.

It was if my entire psyche had been primed to receive this transmission at this particular time, that my dreamy childhood world had been shattered and my awareness raised so I would be able to process this magic in the way only a fucked-up but precocious five-year old could.

I'd soak in this magic by way of my uncle's comic collection before finally plunking down my quarter for Kamandi #30, the story about the UFO abduction and the Stargate and the foreshadowing of the plundering of the Iraqi National Museum. I don't feel like I chose that comic, I feel like it chose me.

And so it was with the other unhealthy obsession, The X-Files. That show premiered at the end of another week in which my reality consensus had been shattered due to another synchrostorm that was nearly comical, it was so blatant and intrusive. In fact, the previous Sunday had seen the literally life-changing fulfillment of a prophetic dream that was the real start of my "Synchromystic" work.

I should note that alien abduction, a topic I'm somewhat ambivalent about, is the common denominator here. I don't know what it means, but it means something.

I talked about a synchrostorm that followed my first trip to Esalen on Gordon's show (and detailed the events in greater detail on this post).

What I should mention now is that another storm recently blew into town. I use the language of Synchronicity because it offers a baseline, a common denominator for us to start from. But I don't really believe in the word as it's understood in an academic or parapsychological sense anymore. I've come now to see it as an expression of more powerful forces, call them magical if you like.
And I do so because these synchrostorms are often, not always, but often portents of unhappy or dangerous events looming on the horizon.

In a more sophisticated and holistic society we'd have learned how to read these portents and act accordingly. We wouldn't pay any attention to people who tell us that synchronicity (however you choose to define it) and precognition are meaningless. On the contrary, they're ONLY about meaning, something Jeff Kripal articulates beautifully on the Rune Soup show.

They're about living in a sentient world and multiverse (universe is too reductionist a term for my liking). They're about the drama of living in a painful world where bad things happen all too often to people we care about. We'd learn how to read instinct, how to distinguish it from emotional static, how to separate meaningful signal from random noise.

Now, one of the reasons I'm obsessed with the pop culture icons I've covered in-depth on this blog is not only their innate qualities and artistic importance, but also their Synchromystic resonances, the tendency they all seem to have to step outside the boundaries of art and cross over into the real world.

The bizarre saga of Elizabeth Fraser and Jeff Buckley, which seems more and more like an ancient myth tearing itself from the pages of history and acting itself out in the modern world, is just one example of this. Kirby's bizarre prophecies (and those of other artists as well) is another.

But these obsessions have also bled into my own life as well. One of the strangest examples was an X-Files dream I had in 1994 that showed up in a plot in 2002 (and much more besides). But following the rather apocalyptic "season" finale of the recent X-Files miniseries, that synchrostorm reared its head. Dreams began manifesting, memories returning as unknown premonitions, the whole nine yards.

Just as we saw in "Founder's Mutation," several thousand grackles appeared in our backyard--the day after the last episode aired. They stayed for five days, seemingly waiting for me to record them, and then flew off. They were here four weeks early (they weren't due until the beginning of Spring), I couldn't find out information on any other grackle flocks in any of the local news or birdwatching sites online (some of which get ridiculous about cataloging every bird someone sees) and they've never settled here in the 23 years we've been living in this house.
Not long after I was talking with Gordon via Skype and telling him a strange story I recounted several years ago on The Hidden Experience podcast, about a screaming animal that seemed to shape-shift in front of my eyes. When I told that story to Mike I didn't know that both the scream (which sounds like a horrific woman's scream) and the shape-shifting lore were both long associated with the Fox, Nature's great Trickster. When I told the story to Gordon, I did.

That night as I was making dinner my son bolted out the door, undressed, clutching his very expensive camera (which he bought following his UFO sighting). When he came back inside he explained that there was a fox on the friggin' front porch, just hours after I recounted my admittedly bizarre fox story to Gordon. He chased it, in the freezing cold, but his fancypants camera couldn't focus in the dark.

The fox came back several nights thereafter. I heard it outside my window and recorded its faint screams in the distance. The next night something must have spooked it since it let loose its fear smell, which is like a skunk, only more noxious.

We haven't seen any foxes in this neighborhood for several years now. And one chooses that exact night to show up on my front porch.

After several more signs and signals I emailed Gordon that I was getting nervous, because I knew from experience what this kind of activity generally presaged. As it turned out, I was all too right.

I was smart enough to document all of this, always cognizant of the danger of misreading or projecting, or slipping off into delusion altogether. Technology was my ally, which I suppose is some kind of irony. But it's always been that way. Information is my 'magic'.

We used to have oracles who could collate all of this information and advise us how to respond. Were they ever credible or accurate? More accomplished people than you or I thought so and did for a very long time. Some even staked the destiny of entire nations around the advice of an oracle. Many still do.

Maybe one day AIs will be programmed to crack these codes and become our new oracles. I actually think that's a very distinct possibility; that what the Enlightenment mind often dismisses as superstition is actually a more sophisticated kind of information-processing.  Something none of us seem to be able to do very reliably. Much to our discredit.

I'll close by saying this: Pay attention. Be aware of what is happening around you. You live in a meaningful, living, sentient world that will speak to you if you take the time to listen to it.

UPDATE: Just a few hours after posting about 9/11 and ill omens, bombings in Belgium. One is at American Airlines terminal, another in a subway. Updates at Associated Press.