The trailer here doesn't show much, but what it does show seems to lock in with a leaked report on the first episode of the new series (titled "My Struggle").
If the report I read is to be believed Carter is presenting a radical new spin on the alien colonization mythos, one that ties into the critique he is obviously aiming at the surveillance state here.
At first it seemed like a retcon (again, if reports are to be believed) but on further reflection it actually answers a lot of long-standing issues fans had with the Mythology itself, as well as issues I myself had stemming from (at least) the Sixth Extinction series.

It's good and true that they look older and more beaten down. It's a bit more honest to the romantic archetype of the lost cause. It's also ballsy as hell to revisit Roswell in 2015, long after the event has had any resonance in the culture at large but at a time when we're seeing more UFOs (and orbs, especially) than ever before, flying above our heads like unwelcome guests, leaving no clue as to their motives or intentions.

But also at a time when the situation beneath them looks ever more apocalyptic. 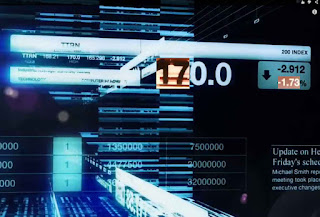 As to these orange orbs that have become nearly epidemic, I'll quote Kenneth Grant, from a book written just as The X-Files reached his shores:


Anyone who has read with attention accounts of UFO encounters will have noted the high percentage of sightings involving the colour orange, the blending of red and yellow.

In the Kala-grammar of occultism, orange is associated with Path 17, the Path of the Double Current. Its magical aeon, or angel, is Zain typified by the sword or scimitar. UFOs are frequently reported as being crescent-shaped when not egg-shaped or lenticular.