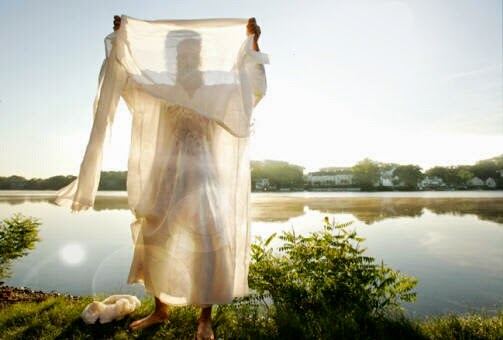 As much as I've tried to make the blog a haven from the media noise machine, I couldn't keep Samsara at bay forever. But events conspired to dovetail the horrors outside with revelations I'd discovered in my studies.

The rise of the Islamic Caliphate in Iraq has horrified the entire world, and the nominal protection previous regimes gave to ancient religious minorities in the war-torn country evaporated under the Caliphate's fundamentalist bloodlust.

As many of you know Iraq was home to the Mandaeans, an ancient Gnostic sect dating back to Biblical times, a people who many believe are Palestinian Jews and the original followers of John the Baptist. The Mandaeans are believed to have fled Roman persecution following the Judean wars and settled in Iraq, surviving two millennia of conquerors, plagues, wars and persecution. Exactly how a small sect of pacifist Gnostics did so was an open question.

Iraq is also home to the Yazidi, a Kurdish sect of mysterious provenance, which some have linked to Zoroastrianism. The Yazidi were big with the pulp writers for their reputation as "devil worshippers," a reputation based on a misreading of their Byzantine cosmology.

The Yazidi are insular and xenophobic, perfect targets for scapegoating by the Islamic State thugs. Well, not so much anymore; the Yazidi have joined forces with the Kurdish Peshmerga and kicking some serious Islamic State ass as of this writing.

But I spent most of my free time over the summer with my nose buried in Gnostic texts, having made the inconvenient observation that there seem to be a lot of unidentified flying whosits in Gnostic texts, just like there are in most ancient religious writings.

As I processed this material I wondered about Ancient Aliens, and wondered if it was analogous to Howard Beale's talk show after his meeting with Arthur Jensen. Does anyone still watch the show or is it kept on to cement the association between a potentially subversive (in the classical sense of the word, not in its current degraded form) topic and Giorgio Tsoukalos' perpetual self-parody?

Because if you happen upon the Mandaean scriptures, it's impossible for any honest person to not admit that they seem to be very interested in spaceships, luminous beings identical to any number of UFO encounters and interstellar travel. 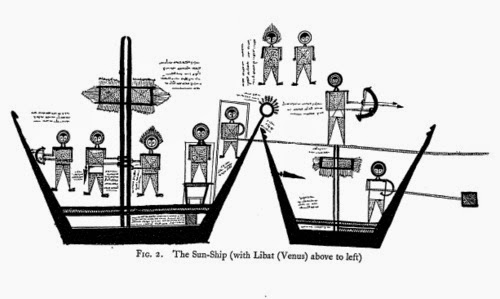 This description of a Mandaean "ship of light" reads like any number of UFO reports:


The fishers see him, become scarlet for shame and remain standing in their places. They say to him: "Whence comes it that thou dost fish without finding? Thy ship is not like our ship; it shines by night like the sun. Thy ship is perfected in æther, and wondrous standards are unfurled above it. Our ship sails along in the water, but thy ship between the waters.

"The waters," remember, are the Biblical term for the cosmos. As we saw in another post on the Gnostics, the Mandaeans believed they were literal aliens, trapped here on here in meatsuits, and that the luminous "Uthras" are their celestial brothers:

To your first earth, ascend, to the place from which you were transplanted, to the fine abode of the uthras. Bestir yourself, put on your garment of radiance and put on your resplendent wreath. Sit on your throne of radiance, which the Life set up for you in the Place of Light. Rise up, inhabit the skinas, among the uthras, your brothers.

They believe that the Uthras are also protective beings, which puts the Mandaeans' long tenure in a very dangerous neighborhood in a new light, certainly.

Given the time of year, it's appropriate to look at the Gnostic Revelation of the Magi, another blatantly obvious contact narrative, one which the academics can't seem to lift the scales from their eyes long enough to recognize.

And when we [the Magi] bathed in the Spring of Purification with joy, and we ascended the Mountain of Victories as we were accustomed, and we went up and found that pillar of light in front of the cave, again a great fear came upon us.

12:3 And again, we saw that heaven had been opened a like a great gate and men of glory carrying the star of light upon their hands. And they descended and stood upon the pillar of light, and the entire mountain was filled by its light, which cannot be uttered by the mouth of humanity.

12:4 And (something) like the hand of a small person drew near in our eyes from the pillar and the star, at which we could not look, and it comforted us. And we saw the star enter the Cave of Treasures of Hidden Mysteries, and the cave shone beyond measure.

12:5 And a humble and kind voice made itself heard by us, which called out and said to us: “Enter inside without doubt, in love, and see a great and amazing vision.” And we were encouraged and comforted by the message of the voice.

The kind of familiar cloud imagery we see in ancient texts was seen in The Gospel of Judas, another well-publicized Gnostic text, a cloud that behaves like no cloud a meteorologist has ever studied:

Look, you have been told everything. Lift up your eyes and look at the cloud and the light within it and the stars surrounding it. The star that leads the way is your star.” Judas lifted up his eyes and saw the luminous cloud, and he entered it. Those standing on the ground heard a voice coming from the cloud…

In Fragments of an Alien Faith, Part 2, we looked at the Fatima Miracle of the Sun and its echoes of a passage from another Gnostic text. That led to a review of the Mithraic Liturgy of the Paris Codex, another face-slappingly obvious contact narrative that inspired Jung's theories on the Collective Unconscious, and the similar stories in the Book of Enoch.

As it turns out, Biblical scholars have discovered that Enoch was in fact a hijacking by apocalyptic cultists, a fact which was almost certainly known by contemporary religious authorities. Looking for Biblical authority to shoehorn the borrowed mythology into, the Jewish mystics glommed onto Genesis 6, familiar to anyone who's followed Christian UFO demonology. From Ha'aretz:


The myth of the Watchers, familiar to us mainly from Jewish texts, started out as an Aramaic myth in Lebanon. Most of its elements are best understood against the backdrop of Lebanese folklore and local artistic landmarks, which played an important role in historical memory as early as the Hellenistic period.

Jews learned about the myth through apocalyptic circles, only then connecting it with the biblical story of the “sons of God and daughters of man” in Genesis 6.

But as it turns out there's no actual basis in scripture at all: it came from these mystics puzzling over then-ancient religious sculptures and what sound like Phoenician contactee accounts. The alien connection was set in stone (no pun intended) from day one:

The ancient, engraved images looked to the later observer like a vestige from the world of the Watchers (Aramaic: ‘irim ), primordial angels who, according to popular mythology, descended to earth in hoary antiquity and bequeathed civilization to mankind.

If you will, these are aliens, in a way resembling those recounted by Erich von Däniken in his pseudo-scientific book, “Chariots of the Gods.”

Babylonian mythology already told of ancient sages who were half-man and half-fish who emerged from the sea and bequeathed civilization to mankind. This old myth was revived in new garb in Lebanon, Syria and the Land of Israel in the Hellenistic period.

In its Jewish form, the myth bore a new aspect: the Watchers conveyed forbidden knowledge, brought to human beings in an original sin. The bearers of the knowledge in the present version were not ancient fish who emerged from the sea but the mysterious angels who descended from heaven.

And even though I am very much not a Sitchinite, you really have to wonder about the whole Enki-Enlil rivalry and how it demonized the accumulation of knowledge in the eyes of the elites of the time. Not in a literal sense, mind you, but how the basic mythforms influenced the evolution of human societies from the earliest days of human settlement.