These Are Gnostic Times 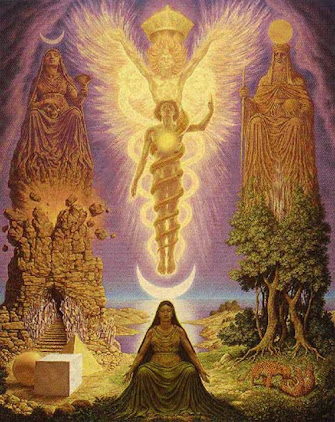 It's been nearly a year since I've posted here, having been overwhelmed by the two irreducible realities in my life: work and chronic pain.
Many a plan and project has been sacrificed on the altar to these unrelenting gods. I've lost count of the times I've gotten started on a project only to have to back burner it when the need to pay the bills rears its head.
These gods are like some Janus-faced thing; one a stern taskmaster that nonetheless allows me to maintain some semblance of a middle class American life, the other a wild beast that seems to serve no purpose at all but make everything in my life more difficult, more tiring, less enjoyable.
I've learned that my particular condition is known as the "rabid dog" of chronic pain conditions among health care professionals, and that even fibromyalgia specialists (who are used to dealing with a vexing disorder) find themselves exasperated by it.

I recently discovered that even a floatation tank aggravates it. Any normal chronic pain condition would benefit from floating in a nice, warm epsom salt bath, but with me it just irritated all of the damaged nerve clusters (known as "trigger points"). So needless to say most of my surplus energy has been spoken for.

For my part, I think the local environment is the primary stressor with my condition (particularly the humidity, barometric pressure, static electricity and mold), which is all too appropriate for a diehard AstroGnostic. I've tried everything but it beats back everything you throw at it. Because I don't belong here.

The problem is that I want my daughter to be able to take advantage of the outstanding public school system as her brothers did, since that experience allowed her oldest brother to graduate with highest honors from a major university this year and score a good paying job even before he was finished with school.
The notion of self-sacrifice has taken a beating in the Selfie Decade, but as my grandpappy used to say, fuck that shit. Do the best for your children.

So this Janus-like lord that's parked itself over my life like a permanent Saturn transit basically drove me to close up shop, for the very immediate and compelling reason that I very much didn't want to die.

I hadn't planned to make a book-length series out of the Secret Star Trek thing, it simply imposed itself upon based on a random detail in Star Trek into Darkness. But in addition to putting in 12 to 14 hour work days I found myself driven to capture this story as each new revelation came to light. It was insane. Obsessive-compulsive workaholic binge madness.

For sure a lot of it had been percolating in my unconscious for some time, but that weird tingling in my sinuses just wouldn't leave me alone, that signal that drives me on to dig up hidden connections. But that's not always the healthiest thing to do when your energies are required elsewhere.

What's more, I have to say the response to the post didn't feel commensurate to the information that was being revealed. This is very much a product of the new Internet reality, one I can't exactly say I'm crazy about but one that needs to be adapted to nonetheless. I've come to understand that longform posts (like, say, this) are self-defeating in an age when more and more people are accessing the Internet through their phones.

Which goes to show you that the notion that evolution leads to things getting better is one of our culture's most pernicious myths.

No, nearly everything is getting demonstrably worse.

I don't think I need to go into too much detail as to how much worse things have gotten out there in the past year, how the world seems perched on the brink of a conflagration the likes of which it hasn't seen in 70 years.

The past few days I was going through some old posts and it was depressing to see news stories of people's expectations for Obama (that Peace Prize seems like the sickest joke imaginable now), and how they've been dashed.

The American Republic has given way to Empire, of that we can all agree. Liberals say nothing at all about it (well, besides mocking the Kulaks in flyover country) because they are hypnotized into believing they will be the courtiers in the new Imperial palace, but in reality the rugs are slowly being pulled from beneath them. By the time they notice it will be too late and they'll all be out on the street.*

One of these rugs is publishing. Borders is gone and Barnes and Noble is in very serious trouble. Ebook sales are falling as well. The major publishers are fighting Amazon for the right to charge full price for Ebooks (which benefits neither authors nor consumers), a fight that may go down in history as their Waterloo.

I'm seeing this from the inside and can't say more than it's much worse than it looks from the outside. I haven't published anything in 4 years because my experience with Secret History of Rock n' Roll didn't whet my appetite for another go-round. I simply can't deal with the limitations imposed on my work by commercial publishing.

The Work (as in the Great Work) continues on. I'll save that for a later post but all I can say for now is that it's been rather stunning and has seriously fucked with my previously held beliefs in causality, agency and whatever hell else you want to throw in. And this is from a guy who's been messing around with Synchronicity and the rest of it for decades now.

What is the point of it? The point seems to be to find strength to carry on with the work in a world seemingly hellbent on making miserable, mindless robots of us all.

And that's quite a point.

I'd like to say the bad guys will lose because good always triumphs but right now that's a pretty hard prediction to make. But people like us have been here before, and maybe by looking at how they dealt with the Black Iron Prison we too can work up some coping strategies of our own.

32 years ago The Bad Brains wrote a song that declared "These are Coptic Times." I don't know if they really understood the meaning of the word, maybe they thought it just sounded heavy and Biblical. What these are are Gnostic times, there are no two ways about it.

These are the times prophesied by the Gnostics and the times most conducive to Gnostic thought. Not necessarily Alexandrian or Bogomil Gnostic thought- the genius of Gnostic thinking is its elasticity and adaptability. A Gnostic canon is an oxymoron.

I think in the days to come a new Gnostic thinking-- one that has shaken off the dust and cobwebs of the library and the lecture hall-- might be the difference between sanity and the Abyss.

There's a strange symmetry of history as we stand on the brink of a new Cold War with Russia and China; the Gnostic Gospels unveiled themselves in 1945 at the dawn of the first Cold War, now a major diaspora of Gnostic peoples- Mandaeans, Ismailis, Yezidis, Druze- looms as Obama's ISIS mad dogs run rampant through Mesopotamia and Syria.

Already many of these Gnostic people have sought refugee status, it will be fascinating if they break centuries of separation and seek to make connections in their new homes.

Scholar Harold Bloom saw Gnosticism as America's native religion and perhaps the already waning atheist/nihilist phase is a necessary step in shaking off the last vestiges of Puritanism and evolving into a purer, more self-aware variety of Gnosis. One that has broken away from the stifling Medieval past.

2000 years ago Gnosticism and Christianity struggled for the hearts and minds of an Empire, but the world wasn't yet ready for Gnosis and Gnosis wasn't yet ready for the world. Then too the Empire's cosmopolitans and sophisticates shunned all gods and mysteries, only to see their legacy wiped forever from the face of the earth. The same fate awaits their counterparts today.
The question remains who will inherit the future?