The Fairest of Them All: A True Hollywood Horror Story 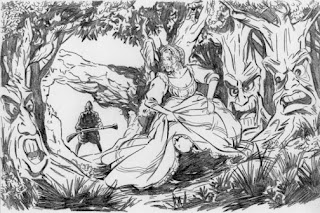 I was watching the revisionist Snow White boomlet (Mirror, Mirror, Snow White and the Huntsman), having a somewhat vested interest in the phenomenon. But as happens so often on this blog, I started looking under rocks on the trail and discovered a deeper story behind the story, something that I will definitely have to look into.

But first, let me walk you through all of this backwards, since this is probably hitting you completely out of the blue. It all started when I read this news item, just a couple weeks ago:

Walt Disney Pictures, fresh from the billion-dollar success of "The Avengers," has canceled "Order of the Seven," a revisionist take on Snow White...Deadline tells us the reason is its way-out-of-control budget in the $150 million range or higher! Saoirse Ronan was attached to star as the female lead and the movie was supposed to be set in Asia with a Samurai theme.

This was a surprise to many people since this project was greenlit at the beginning of the year.

Walt Disney Pictures began work on a Kung Fu action-adventure flavored cinematic retelling of the Snow White fairy tale over a decade ago...

The Disney flick – long known as Snow and the Seven – was eventually re-named The Order of the Seven in Summer 2011, based on the logic that the project (back then) was only slated to contain a handful of allusions to the original Brothers Grimm story.Now, the title has been truncated to just Order of Seven, with all direct references to the tale of Snow White having reportedly been exorcised from the film’s current script draft.

Over a decade ago. Ah yes indeed. What else happened over a decade ago, actually just a couple months before Disney announced this revisionist Snow White project (that obviously had no script)?

Your humble host submitted a treatment to Disney and other Hollywood studios featuring-- you guessed it, Mable-- a revisionist, action-oriented take on the Snow White fable!

Now, this wasn't just me Hail Marying pitch letters around Tinseltown. My cowriter's sister-in-law worked for a big production house and wanted to strike out on her own as an agent. After my previous experience with the movie racket, I wasn't really interested in trying it again, but with an ambitious young go-getter looking for scripts, what did I have to lose?

She had the connections to get things read and I know for a fact that one of the connections she had was at Disney (I believe there's a fax of a coverage somewhere I'll try to track down). Since our pitch had to do with an iconic Disney character, she thought it would be right up their alley. Everything seemed to be going well, we got some good feedback and our aspiring agent was excited about the project's prospects.

But did I mention this was all going down in early September of 2001? Yeah. 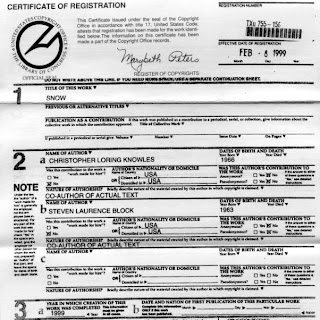 My co-writer lived across the street from the World Trade Center--this project is indelibly linked to Lower Manhattan in my mind, since we did most of brainstorming sessions in his apartment overlooking the Statue of Liberty and the rest of it. He and his family were on the street that day and retreated to their summer house for sometime afterward to recover from an incredibly harrowing experience. Needless to say, no one was thinking much about movies.

The next thing I knew Disney was announcing their own revisionist Snow White project.

Disney apparently hopes to boost the international appeal of the film by casting well-known stars from China, Russia and Japan as the ancient warriors. Studio executives have already begun talks with local talent in those countries.

The project - which has been in development since 2002 - was originally written by Michael Chabon and called Snow And The Seven.

Yeah, Michael Chabon is interested in revisionist fairy tales and Samurais like I'm interested in Jane Austen costume dramas. I'm sure that was his baby. Never mind the title of our project was simply Snow.

I'd been down this road with my previous project--one minute I was being told my script was the talk of the Christmas party circuit and then all of a sudden everyone is rushing their own angel movies into production. But wait- there's more! 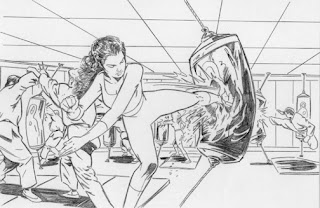 The following is from the Snow treatment that we sent out in 2001. You can read the whole thing online here. In our story, Snow escapes from a secret school in which children are trained to become the perfect agents- assassins, spies, you name it. Methods range from rigorous training and chemical and cybernetic enhancement to hideous forms of mind control (which Snow is subjected to before she escapes).

The time is the early 21st century and Snow is a student at a very unique institution known as the Academy. Its students are children, trained in the arts of espionage and covert warfare from a very early age. We are nearing graduation time, when graduates will be auctioned off to the highest bidders. The school is run by UBELA KONIGEN, formerly the East German Stasi's most legendary agent. The exercises Snow just performed were part of her final exams. Her specialty is infiltration and escape. Like all students at the Academy, she is well versed in all of the killing arts and weaponry and has an above genius IQ.

The Academy, the product of an alliance of Americans and former Communist adversaries. An escaped female super-soldier who was subjected to hideous mind control experiments. Any of this sound familiar? Browncoats?

It was at this point that she was sent to a government learning facility known only as "The Academy". While her parents and Simon believed the Academy was a private school meant to nurture the gifts of the most academically talented children in the Alliance (the uniting governmental force over all inhabited galactic planets), it was in fact a cover for a government experiment in creating the perfect assassin. While in the hands of the Alliance doctors and scientists, River was secretly and extensively experimented on, including surgery that in some way damaged her amygdala.

OK, maybe a coincidence. Maybe the same X-Men influence somewhere in the unconscious. I'll let it slide, given the context (plus I love Firefly).

But this Saoirse Ronan project got me thinking of a review I'd read of her previous film, Hanna. I haven't seen the film as of this writing (it's not on any of the streaming services I subscribe to) but what I've read (allegedly) alarms me.

It hits so many of the bullet points from the Snow treatment I've been wracking my brains trying to figure how a Vancouver film student could have possibly have gotten a hold of a treatment (the friend of a friend network can work miracles) making the rounds a decade before his film was released. That is, if this isn't all some insane coincidence, which I specialize in. 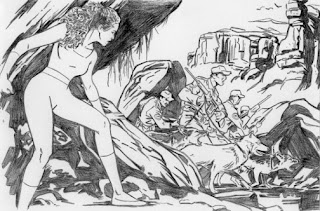 Reviewers praised Hanna for its "originality" (I could strangle somebody), combining fairy tale themes and visuals with action-adventure dynamics, understandably not realizing that we had done that ten years before.

Snow was peppered with idyllic fairy tale scenes, which were the dissociative fantasies Snow escaped to when she was under extreme stress. We later learn that she associates these stories with a happier time in her life:

BEAR
Yeah, but now you can go back to
your family.

SNOW
I don’t have one. The Academy’s the
only family I’ve ever known.

BEAR
Are you an orphan or something?

SNOW
That’s what I’ve been told, but I
seem to remember things and people
from when I was very young. I don’t
know if they’re real or just a
fantasy.

SNOW
I remember someone reading me
stories, fairy tales, when I was
young. It was a woman that I
imagined was my mother. I don’t
really remember what the story was
or what the woman looked like. It was
so long ago.

And from a review of Hanna:

Despite this bleak setting Hanna still has an innocence about her. Seeing a plane in the sky causes her to burst out with laughter. When her father reads to her the account of Laika, the first dog in space, she wishes somehow the animal wasn’t left to die in orbit. Later before bed, she pages through a book of, what else, fairy tales.

Hanna also made use of a driving score by The Chemical Brothers, a rather anachronistic conceit given the film's release date and the Brothers long-expired sell-by date. From the first paragraph of the Snow pitch:

SNOW is the sound of Jerry Goldsmith filtered through the Underworld and re-mixed by Fatboy Slim.

In other words, we were pitching a British techno soundtrack for the film back when such a thing was (relatively) relevant. 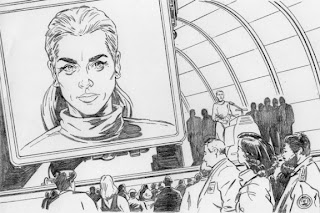 There's also the issue of the "Evil Queen" being an elite intelligence agent in charge of the program that created our heroine. We named her Ubela Konigen (pidgin German for evil queen) and the parallels were not lost on the New York Times reviewer:

And so, after the once upon a Finland time, Hanna and Erik part ways, embarking on an intrigue involving a C.I.A. operative named Marissa Wiegler and played with witty menace by Cate Blanchett. She isn’t the fairest in the land, but she seems the maddest and like the queen in “Snow White” sets her huntsmen (two skinheads and their requisite mincing boss) on Hanna, who pursues Marissa in turn. 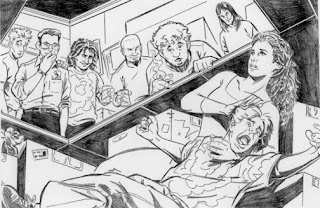 Our seven dwarfs were a pack of luckless hippie hackers holed up in a broken-down Winnebago that Snow discovers after a harrowing escape through the desert. From the Hanna wiki:

She finds herself on the run in the Morrocan desert, where Hanna meets Sebastian (Jason Flemyng) and Rachel (Olivia Williams), a bohemian British couple on a camper-van holiday with their teenage daughter, Sophie (Jessica Barden), and their younger son, Miles (Aldo Maland). She sneaks into the family's camper-van and hitches a ferry ride to Spain, with the goal of reaching Germany.

There's much more, and I'll have more to say about all of this after I see Hanna in full. But let this be a word of caution to any aspiring screenwriters out there. Now, let me just say this could all be another wacky coincidence, the apparent writer of this film was apparently just a film student in Vancouver when he apparently wrote this script. Stranger things have happened and I've written about them on this blog.

But guess what else happens? People get ripped off. I remember reading an article in a screenwriters' trade magazine I subscribed to about how producers were secretly taping pitch meetings and using them to stripmine ideas for free.

Script-readers at studios are all aspiring writers themselves and have aspiring writer friends. They talk to their friends about scripts they've read. They probably rifle through slushpiles of pitches for ideas to steal. They have friends they pass ideas onto and make under-the-table deals so there's no paper trail.

And those "hot unproduced screenplays" always end up getting completely rewritten by the Hollywood machine, as anyone who's read the original scripts for films like Jacob's Ladder and Hancock will tell you.

NOTE: Before you comment, please understand there are plenty of films and cartoons and comic books that explored the same superficial themes we did in Snow; that was exactly the point.

The unique idea we were putting forward was marrying those themes to their thematic opposite-- the fairy tale of the lost maiden. We were constructing a commentary within the narrative, about the modern mythology that was developing around the super-girl.

This was the distinguishing characteristic of the script--the 'high concept'-- upon which its marketability was based. With Snow the elevator pitch was "Snow White as an action hero."