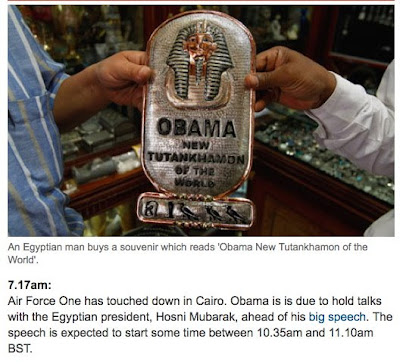 There are no two ways about it- King Tut is an international superstar. There are two touring exhibits of his tomb's treasures (minus the priceless sarcophagus) that have been record sellouts across Europe and North America, moving hundreds of thousands of tickets during a global recession.
The tours coincide with a endless parade of "discoveries" streaming out of Egypt that have put the imagery and iconography (and to some extent, the mythology) of the ancient civilization front and center in the global media. And just like Batmania, we've been here before.
I can't help but think of Steve Martin's 1978 hit single "King Tut" every time another Tut puff-piece makes the headlines. Especially since the single peaked at #17 on the Billboard Hot 100.

And these days I can't think of Steve Martin without thinking about the Oscars, particular given the imagery we saw at this year's Oscars. The rising sun motif we see here is particularly interesting given Martin's Tut connection- the rising sun was identified with Harpocrates, who was a boy-king like Tut.
The rising sun itself could be interpreted as a symbol of restoration, and plays also into the constellation of symbols we've been looking at in connection to the Stairway to Sirius itself. Intentionally or not, the two host format resonates with the binary Sirius system, and also the fact that the Pharaoh was called the "king of two lands."
And then there is the rising sun in the Obama logo, which we're all sick of hearing about by now. And that in turn tied back to Tut's stateside visit to Phila(e)delphia and the can of worms that opened here (an event that essentially began the second phase of this blog, I might add).
Again, while everyone was comparing Obama to Akhenaten, the Phila(e) connection confirmed his role as the new Tut (the polar opposite of Akhenaten), at least in my mind. This connection was cemented when Obama was continuously referred to the man who would "restore America."
No less a figure than Bill Clinton used the term "restore" repeatedly in his DNC endorsement speech. The term caught my ear because Tut's reign was characterized by restoration- the restoration of the old gods after a chaotic experiment in monotheism by Akhenaten. This isn't just a footnote- it's an event that set off an historical chain reaction that continues to this day. 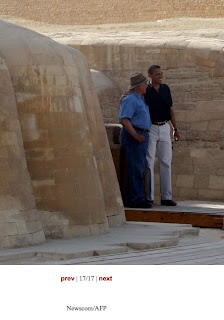 And continuing the Tut meme, Obama then traveled to Egypt and was anointed as the new Tut by no less a luminary than Zahi Hawass, the high priest of the Egyptian Antiquities Ministry. The trip was hailed as Obama's attempt to restore relations with the Islamic world, but given the fact that's he's continued the same policies that caused the rift in the first place, you can't help but wonder if the diplomacy was simply a way to get Obama into the Giza necropolis for some ritual purpose we can only guess at.

Obama seems to be a ceremonial figure in all of this, just as his predecessor was in the Big Apocalypse Fizzle in the Mesopotamian desert. But what interests me more is how Egyptian iconography is being fed into the collective consciousness, particularly with kids.
Like the above photo-op from June '08 at the Dallas Museum, with Demeter and Angel showing off their tickets, both resonating Isis (Isis was identified with Demeter and the modern image of the winged angel comes not from the Bible but from depictions of the Winged Isis). 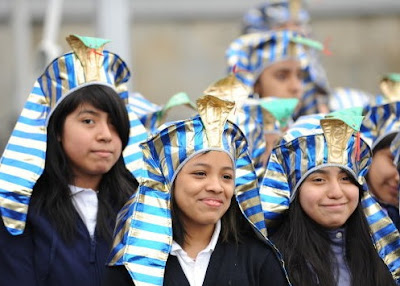 We saw the same kind of giftshop headgear during the ceremony at the South Street Seaport, which attracted no less a luminary than former Mayor Ed Koch. Interesting to note those look like Catholic schoolgirl uniforms. 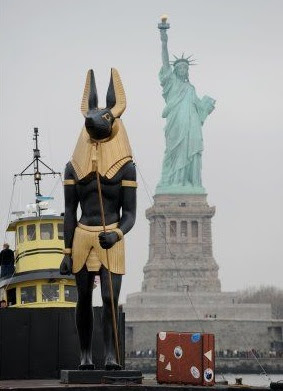 We also saw the 2007 Anubis barge ritual from the Thames River repeated in New York, complete with these beauty shots of Anubis and his aunt Isis. Looking at these shots I can't help but thing of the Flight 1549 drama. I can't help but wonder if there's some strange kind of connection either. 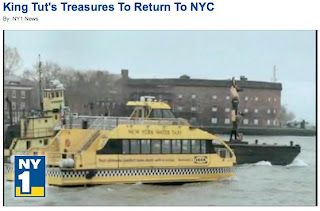 Here's another fascinating shot that didn't make the wire services- Anubis accompanied by a water taxi, offering us a tantalizing parallel to a checker chariot or a solar barque.
THE MEANING OF TUT
At the same time we hear the usual (and inexplicable) "minor footnote, if not for Howard Carter" trope about Tut, this promo video for the touring exhibit elucidates the vital importance of King Tut to the state religion of Ancient Egypt, at a time when the state and its religion were not only inseparable, but identical.
It's hard to imagine a Pharaoh who is less of a footnote than Tut - at least to the powerful priesthoods and secret societies of Ancient Egypt- which leads me to question the entire narrative of the Tut discovery in the first place. Was this some stroke of luck, or was the revelation of Tut (whose death mask has become one of the most famous icons in the world) part of some secret plan we can only guess at? Tut played a crucial role in Egypt's history.
The patronage of the gods was vital to the health of the state (which we discussed in relation to ancient Rome), something the heretic Akhenaten threw into chaos with his monotheistic cult. Tut restored the old gods, something he was celebrated for in this ancient hymn. 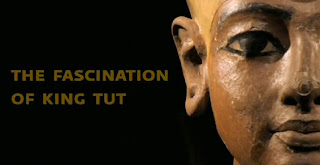 The title of the hymn? "Tutankhamen's Restoration":

The good god, son of Amun, son of Kamutef [literally, Bull-of-his-Mother, title of Horus], the good son, the holy egg whom Amun created, father of the Two Lands, the one who makes the one who made him, the ba's of Heliopolis united in order to form him, to be King forever and ever, as Horus, living immortally.

He is the effective King who did what was good for his father and all the gods.

He restored everything that was ruined, to be his monument forever and ever. He has vanquished chaos from the whole land and has restored Ma'at to her place.

He has made lying a crime, the whole land being made as it was at the time of creation.

Now when His Majesty was crowned King the temples and the estates of the gods and goddesses from Elephantine as far as the swamps of Lower Egypt had fallen into ruin. Their shrines had fallen down, turned into piles of rubble and overgrown with weeds. Their sanctuaries were as if they had never existed at all. Their temples had become footpaths.

The world was in chaos and the gods had turned their backs on this land. If an army was sent to Djahy to extend the boundaries if Egypt, it would have no success.

Does that sound like a hymn to a "historical footnote" to you? Again, Tut is the Pharaoh who brought about the Restoration, the Reversal of Time to the Zep Tepi- the first time, the time when the sky gods ruled the world, something we've been looking at for a very long time here on The Secret Sun.
So why then has Tut become a worldwide superstar again today? I'll leave that up to you to decide.
at April 14, 2010