No matter how far afield things might get here sometimes, I want to reiterate that The Secret Sun is a pop culture blog, that explores esoteric topics in the context of entertainment. So why do I cover political topics here?
Well, I agree with the late Frank Zappa, who said American politics is the entertainment wing of the military-industrial complex.
It's no surprise then that all of the strange symbolism we've seen in entertainment over the past 30 years or so begin to manifest itself in the political realm, as we explored in the Very Sirius Election and Stairway to Sirius series. Of course, that process has gone supernova with the rise of Barack Obama, or Barackobamun as he's known around these parts. 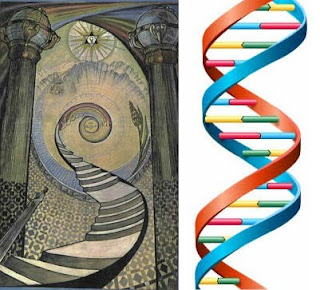 Now, the symbolism behind the Obama election got me looking at Sirius symbolism, which led me to study the Masonic tracing boards. Yesterday, I showed you that that the tracing boards seem to mirror the basic steps of ancient astronaut theory- arrival, DNA manipulation and departure and legacy. I say 'mirror' rather than 'symbolize', because the Masons have a totally different explanation as to their meaning.
The funny thing is that all of this sprung from two strange UFO-type events- the appearance of strange orbs over an Obama rally in Philadelphia and then the blue spiral over Norway before Obama's Nobel speech. All of this has been surrounded in time by all sorts of semiotic insanity. As I've said the ripples are always bigger than the splash.
Now, it seems like forever ago, but at the same time that Barackobamun was nearing victory in the 2008 Democratic primaries, the long-awaited Indiana Jones and the Kingdom of the Crystal Skull premiered in theaters. The film was savaged by some critics (and fans) but was a monster box office smash. And as we discussed here the film was a Synchromystic goldmine- Roswell, remote viewing, interdimensional aliens, AAT, you name it.
But there was another aspect to the film we looked at here, something not in the script itself. And that was the weird parallels of key plot points in Crystal Skull to, yes, the Masonic tracing boards. Only in reverse.
The reversal motif always fascinates me, since it was an important part of the rituals of the Shemsu Hor- guiding the soul of the Pharaoh backwards in time to the Zep Tepi, or first time. As Hancock and Bauval wrote in The Mystery of the Sphinx:

So when we read in the Pyramid Texts that the ‘Followers of Horus’ are urging the Horus-King to travel from Taurus to Leo it is possible that they may have had in mind something rather complex and clever.

This 'reversal in time' motif is not unique to the Egyptians; the Greeks had their obsession with the Golden Age, Dicoletian sought to restore the old Rome with its Imperial cult of Jupiter, the Jewish messiah was to restore the throne of David, Christians have their New Jerusalem (in which Christ- the new Adam- rules the earth as Jehovah once did), radical Muslims seek to return to the Caliphate and radical Jews and Fundamentalist Christians have talked of rebuilding the Third Temple.
We've seen that return motif in any number of artistic and cultural movements. In this context the reversal literally leads to the ancient gods, who just happen to be aliens.

So here's what we looked at in Crystal Skull article- this version of the Third Degree board...

...mirrored by this notorious scene (the "nuke the fridge" scene), complete with what is called a "deathtrap" coming open, revealing Indy. Note the parallel flashes of light and the branches as well.
It's important to note this is a nuclear test here, something that UFO cultists in the 70s and 80s claimed attracted the attention of the 'space brothers'.

Counting down, we have the Second Degree board, which has the water and a the spiral staircase inside what looks like a temple (Solomon's Temple - revered by the Masons - was said to have a "winding staircase").

In Crystal Skull, we also have a memorable waterfall sequence, where we are told "three times it drops". This eventually leads Indy and his entourage to.... 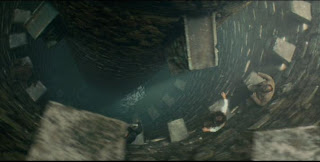 Last but not least, we have the angels/aliens descending their staircase from Sirius to Earth- and straight into a Masonic temple, so it appears.

Completing this reversal motif we see the aliens, now back atop their staircases, ready to return to their other-dimensional realm. In other words, the reversal of time symbolized by the backwards journey through the tracing boards takes us to, yet again, alien gods.
As silly as this story may present itself as being, there's a whole host of very obscure occult and esoteric doctrines being played out here...

...such as Irina returning the venerated Baptist head to the 13th alien (we've looked at Baptist motifs in sci-fi film here before. He we are back to the Oannes motif we looked at in the context of I Am Legend.
Theosophist author G.R.S. Mead wrote this about the Baptist:

“...early apocalyptists and allegorists, who were probably Jews of the Babylonian or Syrian dispersion, could conceive of their preexistent Messiah as in such a way associated with the figure of the ancient Hani (Oannes, Iannes, Ioannes) and expected the Redeemer of Israel to arise from the depths of the great waters, it is not improbable that in those days when the interplay of mystical association was so prevalent and eagerly sought out some of the most enthusiastic followers of John may have believed that his baptizing ‘fisher of souls’ was the expected manifestation.” 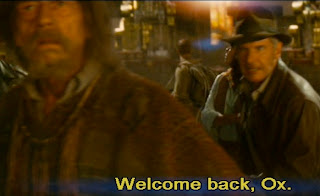 Is this line the giveaway as to the "reversal of time?"
The scientific name for the ox is bos taurus, which ties us back to the Shemsu Hor and their rituals tracing the Age of Taurus back to the Age of Leo.
The Age of Taurus saw the glory days of Egyptian civilization, from the rule of the Horus Kings through the Pyramid Age and beyond. We hear Indy explicitly reference the ancient Egyptians (and their beliefs) but more importantly, Egypt's early period. So "welcome back, Ox" has all sorts of interesting subliminal connotations in the context of this film. 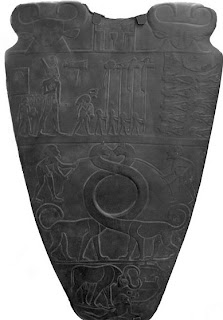 It also saw the rule of Narmer, who we discussed in an earlier Oannes syncstream. Narmer may or may not have been the legendary Scorpion King, who we also looked at this year- and who himself has semiotic links to Obama. Above is legendary Narmer stele, whose tiered format brings us right back to where all of this insanity started... 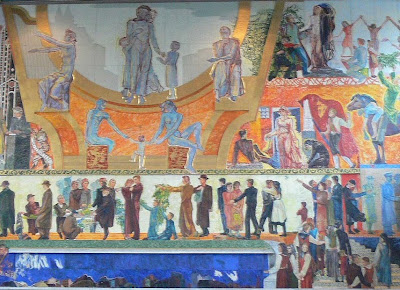 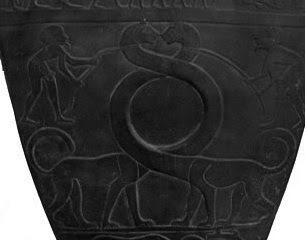 The stele also gives us yet another ancient depiction of a double helix, using those strange, almost-alien animals.
DNA, yet again? Where it doesn't belong?
at December 17, 2009