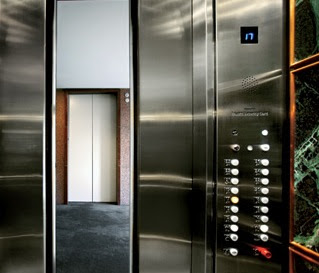 Of course the big news in the soul-crushing world of consensus reality is the expected guilty plea of Bernie Madoff. I've been watching this story with great puzzlement. Though the suffering of his victims is certainly real, there's a carnival aspect to the story, as if it is all part of some larger agenda.
What his downfall and that of other super-criminals like Allen Stanford is doing is destroying people's confidence in the confidence scheme known as the financial industry. I'm not sure I see this as a net negative. I've read a lot of diatribes against Madoff describing him as a sociopath.
Well, duh. I used to ride the commuter train surrounded by sociopaths on their way to Wall St. every day. I studied these guys. And a lot of them were the same kinds of assholes and bullies I hated in high school. 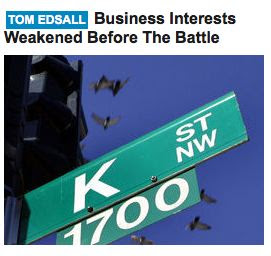 I remember hearing two of these types working themselves up into an orgasmic frenzy the day the Gulf War started, talking about how excited "everyone on the Street" was by the carnage, and how they "didn't see a downside to it."
I saw guys sit and read The Wall St. Journal while pregnant women stood. I heard desperate, douche-chilling attempts to converse on a simple human level with one another about anything but money. I'd watch these characters sneer and sigh as Latinos or blacks boarded the trains at Broad Street. Every day, mind you.

Greed is the great amnesiac. When the Dow goes up, no one remembers 1987 or the dotcom bust or Enron or all of the other great swindles perpetrated on innocent people's life savings by thugs in three thousand-dollar suits. But in this Great Upheaval we are living through it almost seems to me that someone has decided the jig is up. Hence we see all of these Wall St. superheroes set up as the fall guys for the crash.
Jon Stewart has been especially brilliant in disemboweling that howling buffoon, Jim "BooYa" Cramer. But we won't have much say in what will replace all of that idiocy, either. Indeed, we've been fed these stories about the new Treasury Secretary's "incompetence," and of course now he is telling Charlie Rose that "Capitalism will be different." Oh, I'm sure it will. Quite different, indeed. 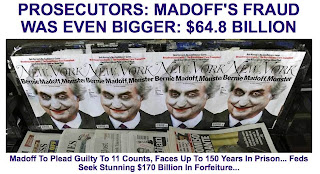 Looking at all of this, I can't help but wonder if Madoff was himself on the losing end of a sting. We're seeing that magic 17 show up (Madoff's office was on the 17th Floor of the Lipstick Building) but not in his favor. Whatever he had planned, he's become the great sacrificial goat (note that New York made him up as Heath Ledger's Joker there) of this ritual recreation of once-mighty American capitalism into a mere component of the Global Economic Singularity.
Having seen some of the faces up of Wall St. up close, I won't cry if a few of them follow Madoff to Molech's embrace.

UPDATE: And right on cue, here's the other shoe dropping. The President of Earth, Barackobamun the First, calls for a global stimulus and HuffPost gives us the requisite sunrise symbology.
at March 11, 2009