The Shemsu Hor, or Following the Followers 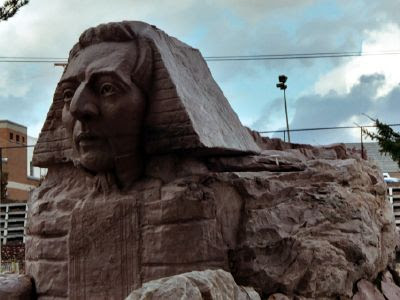 Terry Melanson of ConspiracyArchive.com raised this very important issue in the comments to yesterday's posting...

So what you seem to be saying, as far as I can tell, is that these "Followers of Horus," the secret priests of the secret society of Shemsu Hor which, according to Egyptian records, existed before time was recorded, are the real string-pullers even today. They have constructed all the competing hermetic and kabbalistic occult doctrines and have been the real "Unknown Superiors" alluded by the Elus Cohen, the Strict Observance, the Golden and Rosy Cross, and Theosophy. And further, that it is these Shemsu Hor who are behind the pervasiveness of sun symbolism?

My answer is that it's certainly a thesis worth investigating.
I had the pleasure to meet Graham Hancock a couple years back and we talked about the Shemsu Hor briefly. Graham is a man who's done more research into the Shemsu Hor and the history of secret societies and historical mysteries than anyone, and he emphatically and unambiguously told me that he believes the Shemsu Hor still exist.
I have no way to confirm whether that is true, I can only look at their symbols and their beliefs and see how they are manifesting themselves in the culture today (which they are doing everywhere). As to all of the competing doctrines, it's possible, but I don't think that's necessary. There's always imitation and corruption and schism to explain that.

But let me just draw on this passage from the original manuscript of Our Gods Wear Spandex to show how one group can be behind the formation of other movements. In this passage I talk about how Freemasonry seemed to be the figure behind the curtain with a number of alternative religious movements (and several other civic and fraternal groups that we'll be looking at in the future). Terry himself delves into the role of Freemasons in the creation of Theosophy.

Here on the blog I feel free to speculate, but when I publish I feel obliged to stick to established fact. That being said, it's my opinion that the Freemasons were very, very busy in the 19th Century creating any number of movements for purposes I can only speculate on.
From Our Gods Wear Spandex:

The 19th Century also saw the rise of major alternative religious movements, particularly in America. New England seemed to be a particular hotspot for these movements. Three of the most important movements of that time - Christian Science, Transcendentalism and Mormonism - trace their roots there. And all three had important links to Freemasonry. 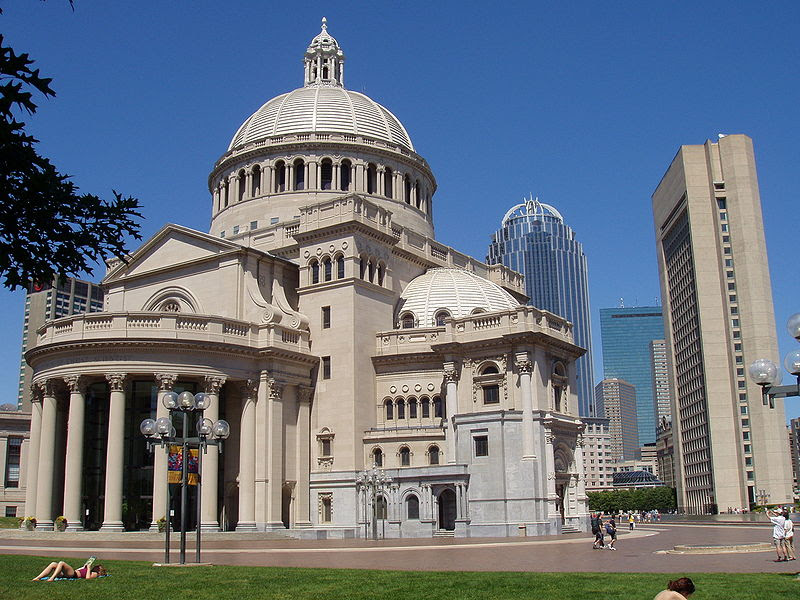 Here's the domed Mother Church. Notice extremely phallic looking skyscraper in back of it.
The Christian Science Church was based on the doctrines presented in Mary Baker Eddy's 1875 opus, Science and Health with Key to the Scriptures. Eddy (1821-1919) taught the virtues of healing through faith, preaching that illness was an illusion. To many adherents, this has led to the disavowal of medical science. Christian Science was essentially mystical, and unlike many denominations allowed their adherents to become Freemasons. In 1921, the Masons paid tribute to Eddy by erecting a 11-foot high pyramid at her New Hampshire birthsite, but the Church's embarrassed directors had it destroyed. (See Mary Baker Eddy Letter no. 7, pg. 11)

Christian Science became a popular religion with the educated and with people involved in the arts. The Church built an enormous ‘Mother Church’ in Boston, and founded the influential newspaper The Christian Science Monitor, as well as several other long-running periodicals. Like Scientology in more recent times, Christian Science was popular in Hollywood, counting Frank Capra, Howard Hawks, Henry Fonda, Joan Crawford, Elizabeth Taylor, and Doris Day in its ranks. Monkee Michael Nesmith and former Batman Val Kilmer are both active and practicing Christian Scientists.

The Church of Latter-Day Saints, more commonly known as the Mormons, have their origins in hidden scriptures known as 'The Golden Plates,' allegedly revealed by angel named 'Moroni' to Mormon founder Joseph Smith. The Golden Plates claimed that Jewish tribes emigrated to America following the fall of Jerusalem and that Jesus reappeared to them.

Though The Book of Mormon is formatted like the Bible, it's contents bear a strange similarity to the 'boy’s adventure' stories of the time. Mormonism is considered to be a pseudo-Christian cult by most Christian denominations, and preaches a cosmology more akin to Gnosticism.

Mormon doctrine teaches that God was once a mortal and that men have the potential to become God's themselves. It was also infamous in its time for encouraging polygamy for its male adherents. The Mormons were extremely unpopular in their early days and traveled west to flee persecution. They settled on the great Salt Lake in Utah and began to spread their faith.

Mormons are generally conservative and active in Republican party politics. They tend to abstain from vice and have large families. Every young adult Mormon is required to serve two years as a missionary.

Joseph Smith was initiated as a Master Mason in 1842, and many claim that Mormon rituals are based in Freemasonry. It is also believed that Smith had an Occult teacher named Dr. Luman Walter who tutored him in the rites of ceremonial magic and alchemy. Interestingly, Egyptian themed symbols are common in Salt Lake City, including a statue of the Great Sphinx bearing Joseph Smith's likeness. The Golden Plates were recently adapted into comic form by Mormon comic artist Mike Allred (Madman, X-Factor).

Transcendentalism was essentially blend of Christianity and Eastern thought, which had a strong influence on Theosophy and is generally regarded as the foundation of today's New Age Movement. The Transcendental movement began in September 1836 when Ralph Waldo Emerson founded the Transcendental Club.

In January 1842, the Club announced itself to the world with a lecture read by Emerson at the Masonic Temple in Boston. Emerson read texts like The Bhagavad Gita and Buddhist scripture, as well as the writers of Christian mystic Emanuel Swedenborg, and from them developed a philosophy that taught the unity of Creation, and the virtues of mysticism over rationality and logic. Emerson's circle included novelist Nathaniel Hawthorne and philosopher Henry David Thoreau.

There was even a Transcendental commune, but it was short-lived (as communes filled with intellectuals usually are).

If that's not enough, I just found evidence of a link between Masonry and Rastafarianism.

It has been suggested that the Rastafarian word for God, Jah, comes from the term Jahbulon. William David Spencer, in his book Dread Jesus (ISBN 0-281-05101-1), proposes that Archibald Dunkley and Joseph Nathaniel Hibbert were among the preachers that inspired the Rastafari movement, and that both were members of the "Ancient Mystic Order of Ethiopia", a fraternal order derived from Prince Hall Freemasonry.

Spencer believes that several features of the Rastafari movement derive from this lodge, including the name "Jah", from the word Jah-Bul-On.

But back to Terry's question, could an impossibly ancient society be behind any number of other groups? If so, what power do they have to control so many other powerful individuals and groups? That's really the crux of the matter, isn't it?
What could be compelling all of these countries to join in this emerging "global community?" (don't you love how the media picked up on that phrase when "New World Order" didn't do well with the focus groups?)