"The Magic of Kirby" 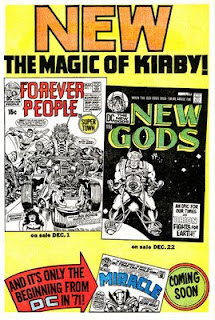 I'm sure most of you out there remember the Crash of '94 and its aftermath. The year began with the passing of Jack Kirby, one of those events that the ancient Romans would have seen as the grimmest of grim portents.
Yet, the over-inflated balloon of the Chromium Age didn't exactly implode: it just deflated, relentlessly. It took a few years for the grim new reality of the direct market to sink in. But around '96 or so, fans and pros alike dialed into Compuserve and America Online to commiserate, recriminate and try to imagine a way out of the mess that over-expansion, obscene back issue speculation and just plain terrible comics had gotten everyone in.
A lot - and I mean a lot - of people said it was all over, turn out the lights before you leave. I wasn't one of them.

I actually taught myself to read at the tender age of three (that's around 1970, for those of you keeping score at home) while trying to parse a coverless, giant-sized Superboy comic. I was a sickly child and had a lot of time on my hands, so I read comics like they were scripture.
When I was able to smuggle them home, I also read Joe Brancatelli's scathing columns in the Warren magazines, and got my first issue of the Comics Journal sometime in 1980 (that being the one with the notorious John Byrne interview). And at the tender age of 17, I took a job with George Suarez's nascent New England Comics empire, "nascent" meaning his empire then consisted of a hole in the wall in downtown Quincy, Mass.
But George is a retailing genius of the first order, and I learned a lot about how the market really worked under his wing.

Since 1970 there have been several booms-and-busts in comics. You had Marvel's early Bronze Age expansion, the DC Explosion and Implosion, the independent boom, the independent bust, the black-and-white boom, the black-and-white bust. Ebb and flow is how markets operate.
But around 1999 or so, it seemed like this crash was something different. The Internet and computer games seemed to be stealing away the potential readership for comics, and literally thousands of retail outlets had been lost.
But I knew- I just knew- that comics and superheroes and superhero comics had an ace up their sleeve- something that certain people need and can't really get anywhere else.

I first discovered this something sometime in 1971. After church, we used to go to my grandmother's house for Sunday dinner, and it was probably on one of those lazy Sundays that I picked up The Witching Hour #12. It had a horrifying Nick Cardy cover and a mystifying Alex Toth story about a hip young warlock, but that wasn't what captured my attention.
What really did me in was a full-page ad with a bold black headline screaming "THE MAGIC OF KIRBY!" The ad featured the cover art of the premiere issues of The New Gods, The Forever People and Mister Miracle. I vaguely knew the name "Kirby" from my uncles' Fantastic Four and Thor comics, but nothing could have prepared me for these images.
There was a moment of almost-mystical synergy here. The heroic imagery of comics and the countercultural vibe of the time were fueled with the language of religion - Gods, Forever, Miracle - that a good little Methodist boy like myself knew well from Sunday School. What I didn't realize until much later is that this synergy has been part of the superhero's essential DNA since Action Comics #1.
at December 25, 2007