Life's a Riot with Spy vs. Spy 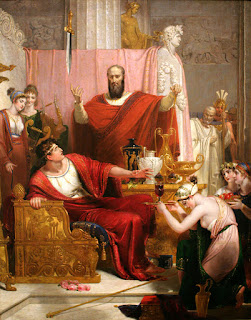 Well, that was a surprise.
Like a lot of you I wasn't expecting that. But it makes more sense as we move on and more information comes to the surface. It may well be that what we just witnessed (though hardly anyone realized it, or will realize it) was the end result of a secret war between powerful factions of the Deep State. Well, perhaps not the end result but certainly a climax.

I haven't written about the election until now because, frankly, I'm confused. I've been following the news as best I can and I have only questions for you, I'm afraid. But they're interesting questions.

I'm no fan of the Donald, never have been. I don't have high hopes for his time in office. I know some of you may disagree, but I've been watching this guy for a very long time. And I'm beginning to seriously wonder if, as I speculated, there is indeed a plan to render the country ungovernable. If so, they're off to a good start.

But first a reality check.

For Trump's friends and enemies I think we need to remind ourselves who exactly we're talking about here: this is a man who has spent his life in the belly of the Beast. He's swam in the most shark-infested waters imaginable: New York real estate, New Jersey gambling, professional sports, network television. He's survived because he's a shark too.

And this isn't an "outsider" we're dealing with here, this is a product of the System, through and through. The people he's been tapping for his transition team and Cabinet make that abundantly clear- almost to a one, it's a parade of standard-issue machine hacks, old ghosts from the political past.

I'm not going to go into the more extreme accusations and characterizations of him and his circle because I've heard this kind of thing all my life about every Republican politician. Like I said, I'm not a fan of the man, didn't vote for him and have no interest in defending him, but political correctness has not only gone entirely toxic, it's actually become profoundly counterproductive.

But anyone can drone on about that. I'm more interested in this strange fugue state that Washington and the media seem to be in. Is it simple shock or are there other forces at work?

Because no one seems to behaving the way they have following previous elections, and certainly not the way you would expect if there truly were some dire threat to the Republic itself. Why?

The margins in so many of the states were achingly close for Hillary. Why didn't she ask for recounts? She apparently won the popular vote so why not wait to concede and challenge some of the results? Why give up so easily? Hasn't she wanted this all her life? Wouldn't her backers want some return on the billions spent on her election? Again, why give up so easily?

Why haven't either Trump or Hillary made an issue of election fraud? There seems to have been no end of allegations this year, so much so that even the mainstream media was forced to address it. What's up with that?

If Trump is indeed such an existential threat to the Republic, why have we seen so little pushback from Congress? Why is poor old Harry Reid (who- significantly, perhaps- is out the door at the end of this term) forced to play the attack dog? Why are the Dems spending so much time fighting amongst themselves instead of putting up a united front?

Why are we seeing this coordinated attack on Breitbart editor Steve Bannon after the election is over? He ran the Trump campaign, he was a known quantity all this time. Wasn't the time to try to take him down before he won the election? Why would they wait until now?

And why would they criticize Bannon for his extremist ties when they know it would open them up to a counterattack (and charges of hypocrisy) when they want to nominate a guy with deep ties to the Nation of Islam and other extremists to lead the entire Democratic Party? Is going after Bannon a preemptive strike? It's starting to feel like one.

Why is the media denying any connection between the demonstrations- and indeed, the riots-- and the party machine? Democratic pressure group MoveOn.org publicly called for demonstrations the day after the election. No one seemed to have a problem with that at the time. I'm sure Trump fans would have been marching if he lost, too.

But many of the rioters in Portland who've been arrested for smashing up their nice liberal city didn't even bother to vote, leading one to wonder if we're seeing an op here (ah, those Black Bloc boys, they sure do get around!). We've seen other agents provocateur in places like Austin as well.

After all, riots and traffic blockages and all of the rest of the mischief we're seeing only piss people off and turn them against your cause. It's simply bad strategy. Cui Bono?

Why did the head of the Securities and Exchange Commission, which regulates Wall Street, step down two years before the end of her term? She just happened to have been involved in the Marc Rich investigation, which the FBI inexplicably got involved with recently.

Why would a Democratic party operative criticize George Soros-- the de facto head of the party-- as ineffectual and out of touch in friendly press outlet Politico? Why hasn't Soros had his hacked position papers taken offline yet? If Russia really was behind that hack you can be certain that site would get yanked.

Why are so many Democrats sounding like McCarthyite Cold Warriors when it comes to Russia these days? Do they seriously believe Putin was behind the leaks? Indiana Senate candidate Evan Bayh lost his race after his connections to big money donors leaked to the press- was Putin eyeing a takeover of the Senate seat from Indiana too?

Why did Clinton lieutenant Sidney Blumenthal claim we've seen a coup, led by the FBI? Sour grapes? Conspiracy theory? This isn't some cellar-dweller we're dealing with here. Why would he say such a thing?

Who is this old Nixon hand going on Alex Jones' show and claiming there in fact was a counter-coup, allegedly staged by military intelligence against a different coup?

It's all so confusing. But there's one important question left to ask.

Is it at all possible that this weird fugue might have anything to do with this Pizzagate abomination?

This story just gets worse and worse every time I look at it. I'm not just talking about the theorizing you might see on a 4Chan, I'm talking about the Facebook and Instagram pages of some of the subjects in question. I want to wash out my eyes.  With bleach.

Is this in fact the Sword of Damocles, currently hovering over Washington's head? Is this why everything feels so damn off? Is this why Trump seems to be operating relatively unmolested? Former Blackwater head Erik Prince seem to indicate as much before the election but, you know- Erik Prince. Not exactly a disinterested observer.

This may well be the reason you're seeing this huge push against so-called "fake news" sites.

Because if this breaks out the mainstream media might try to bury the story and leave it to the alt.media to cover, since the scandal could possibly lead to their doorsteps, given how incestuous media and politics have become. Which, of course, we know all about now because of the Wikileaks revelations.

I said before the election that all of this threatened to become the new Franklin Savings scandal but I was wrong. Oh, so wrong.

If any of this pans out, it's much, much worse.

If any of this pans out-- and by that I mean makes it to trial-- this is the fucking apocalypse for American politics.

As a matter of fact I woke up in the middle of a troubled sleep the day the FBI would later send its letter to Congress and texted our Gordon that I'd been dreaming all night of the Apocalypse.

Those dreams may yet turn out to be prophetic.