Slave to the Gods Redux 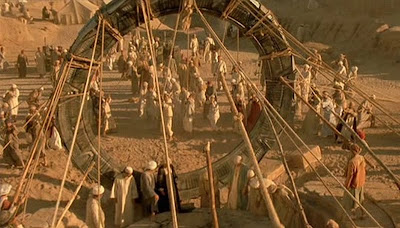 Well, the day job has been the day, night and weekend job lately which is why posting has been light. But at the same time hours spent at the computer makes me a captive audience for all kinds of inputting- audiobooks, podcasts, movies and various video ephemera, as well as all kinds of Victoria narrations and bedstand reading.
In fact, the real reason posting has been lighter than it would be otherwise is that I'm inputting and collating all kinds of seeming unrelated information, perhaps leading to a new Weltanschauung.
Well, maybe not a new one but certainly refining the old. But certainly the ECH has been acting like a virus in my brain, rewriting old ideas and making connections of once unrelated-seeming symbols and memes.
It's been an amazing process, though a little frightening, realizing that things you once thought were separate are anything but. One of the posts that's been kicking around the queue deals with the human need to dis-believe, which is certainly as strong as its need to believe.
But at the same time I've also been thinking about how meagre and insubstantial "belief" itself is-- it's essentially a state of thought built around incomplete information.
But I can't just say that and let it be- I need to back it all up. That takes time. The more you know the more balls are put into play and that's very much a problem I've been experiencing. I've got a pile of mental clippings floating around- connections and variables that didn't trouble me before but once known can't be ignored.
I've also been working on a post arguing that the first season of the original Outer Limits isn't science fiction at all but a kind of alchemical ritual drama, recasting very old myths and encounters in Space Age drag. I could write something about it just to post something, but I can't allow myself to do that.
Because at the same time there's this whole occult subtext, there's also the fact that the show was being used as a venue to leak then-classified information about UFOs and especially abduction phenomena, which wasn't on anyone's radar at the time. Certainly not any UFOlogists, who were still locked on 40s vintage ideas about friend-or-foe Reticulans.
And yet abduction is a constant thruline in the series. But not in a Budd Hopkins way- more like in a bardic fashion, or perhaps even an initiatory fashion. My research has led me to realize that the series was very much an anomaly at the time, dealing with issues no one else was paying attention to.
Which brings me back to Star Trek (which was very closely connected to Outer Limits), which has been in the news a lot because of pre-prod of the next installment of the Dawson's Trek calamity.
Some people thought The Next Generation was just some unholy marriage of militarism and political correctness, not realizing how all of that was just a smokescreen for the real agenda, which we've explored here. I also believe that I've figured out who was bringing the weird to nu-Trek, which will also be the topic of a future post, once I put all of the pieces together.
In a lot of ways I feel as if this puzzle I'm trying to put together is adding a lot more pieces all of the time, and so needs much more time and attention than I can manage at the moment. And the doorways to the mystery just keep multiplying. It's exciting and frustrating, all at the same time. It's all going somewhere, of that I have no doubt. Somewhere very exciting and scary.
So I accept my current time limitations for writing, since I'm learning so much. You have to learn to trust your instincts once you wander off the well-worn path, and mine tell me that new revelations await.
In the meantime, don't forget The Secret Sun Facebook group, which has been a veritable beehive of esoteric discovery.
at June 26, 2011