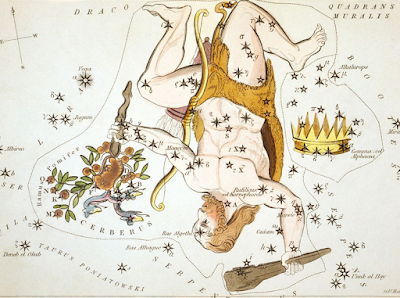 My friend David Dodd is currently pursuing his degree in Intellectual Property law, but was previously a Latin teacher at prestigious Newark Academy. Dave is also a serious student of the Classical world and as such is my go-to guy for deep history from that period.
Pursuing further the centrality of Hercules to the creation of Superman and the entire superhero genre, Dave picked up on my observation that Hercules original name Heracles may well be linked to Horus, by way of his original Egyptian name Heru. I'll let Dave pick it up here, because he is unlocking a door that puts the superhero genre in a new light entirely...

Heracles means "fame of Hera." Why he would be given that name, when Hera hates him in the myths, is an open question, but the name itself isn't confusing in the Greek. Hercules is the version in Latin -- it's a mispronunciation of the Greek name essentially... The relationship between "heros" and "Hera" is more complicated. They're both really old words, so any relationship between the two of them may relate to meanings that they no longer had in historical times. I'm reluctant to connect them to Egypt, as they both have pretty unique meanings tied to Greek culture.
At any rate, defining "heros" as protector/defender is a bit of a mistranslation. A heros is a guy who in the past did amazing things but then got killed in a really humiliating way, so that his spirit will come back and curse the living, unless they make offerings to him. If they do make offerings to him, he'll make the crops grow, and keep the city from being attacked (crops and war are pretty closely linked for the Greeks).

What Dave is describing there exactly is Osiris, as reinterpreted by the Greeks. What seems abundantly clear to me is that heros is indeed derived from Horus, since the Hellenes saw Osiris and Horus as the same personage- he and his father were one. And this has precedence in the Egyptian mysteries- In life the pharoahs were named as Horus and in death they became Osiris. The Greeks would later conflate the two, which is why Osiris is often misidentified as a Sun God today. This is most probably where heros came to be used to describe characters that fill the archetypal role of Osiris.

And here is a common image of Osiris- called the "Green Man" making the crops grow, just as the heros were responsible for in the Greek stories.

Dave writes: The ambivalence of these figures is reflected in the rituals, which are similar to offerings given to the dead, and like the dead, their shrines are put at the edge of town, where they can do the least damage to the city, and the greatest damage to anyone coming to town to do bad things.

To take the Heracles connection in a different direction, I once heard a pretty plausible paper delivered arguing that some of the miracle stories about Jesus were originally stories about Hercules. The story I remember the most about was the one where Jesus drives the demon "Legion" into the herd of swine, which then run off a cliff and fall in the sea. Apparently there are no cliffs overlooking any of the seas in the holy land. However, by tracing connections between names, this scholar pointed to a place in Spain where the geography makes more sense, and where there was a temple to Hercules.

Well, yet again, we see another version of the swine story with Osiris. He sat at the judgement seat in the Afterlife and condemned the wicked to Hell in the form of a pig. 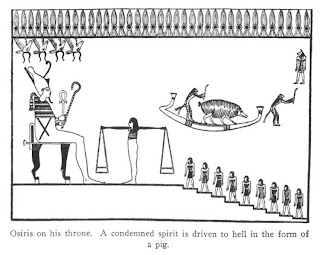