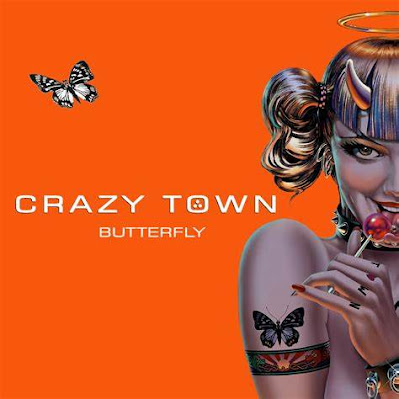 Butterfly and moth symbolism has been a perennial topic inside the conspiracy underground since the publication of TRANCEformation of America in the mid-1990s.

Very few (if any) serious researchers took the book's claims of a "Monarch" project with anything less but a very large grain of salt, but there's no denying the ubiquity of butterfly symbolism all over the various causes and cults created and controlled by the Cryptocracy. 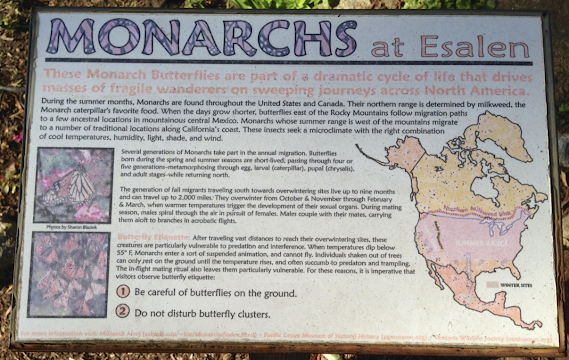 Now to be clear, the butterfly is a beautiful, nearly magical creature that often seems to exist both inside and outside our ordinary reality. It's not hard to understand why they and similar beings (like fireflies and dragonflies) have historically and universally been seen as manifestations of the fairy world or some other supernatural realm.

There's also a very strong sexual connotation to the butterfly, for reasons I'll leave up to your imagination.

Butterflies and moths are also universal symbols of transformation, for obvious reasons. But there's good reason to believe the symbolism was part of the programming used on "patients" (meaning "victims) of witch doctors in Ewen Cameron's MithrasKybele Ultra orbit and then channeled into the early New Age movement.

And no wonder: those tiny, fragile creatures offer a lot of symbolic bang for your conjurer's buck. 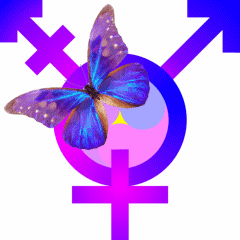 More recently, butterflies have been seen all over the high fashion world and are now being adopted by the Neo-Galloi revival as a symbol of "gender affirmation."

Along with mermaids, I should add. Go figure.

Bearing all that in mind, let's take a look at one of the influencers who've been instrumental in promoting and popularizing the butterfly and many other symbols as part of a wider program, based in the perpetual fantasy of humanity progressing towards some omega point of "transformation."

David Spangler's name has been bouncing around the Conspirasphere for a long time, largely because of what seems to be a fake quote attributed to him in which he says something about the initiation of Lucifer. I've been looking for the original source for this quote for a very long time, and as far as I can tell it was manufactured by Constance Cumbey for The Hidden Dangers of the Rainbow.

But it's very hard to access any of Spangler's books online, so I still can't say for sure. Not that it makes much difference in the end.

Spangler has been a central figure in the New Age since the late 1960s and was closely associated with the Findhorn Institute in Scotland, the Rockefeller-funded Lindisfarne Association and now the Lorian Institute in Washington State. He has the connections you'd expect by now:

Spangler was born in Columbus, Ohio in 1945. At the age of six, he moved to Morocco in North Africa where his father was assigned as a counterintelligence agent for U.S. Army Intelligence. He lived there for six years, returning to the United States when he was twelve in 1957.

He attended Deerfield Academy in Massachusetts, though his time there was interrupted when his family moved to Phoenix, Arizona, where he graduated from high school.

Note that Deerfield is a school for the elite of the elite: Rockefellers, Scaifes, Kochs, the Jordanian Royal Family, etc etc etc.

He attended Arizona State University where he was working for a Bachelor of Science degree in biochemistry but continued to pursue other subjects of interest.

Biochemistry, eh? Isn't that what Andrija Puharich majored in?

All that said, Spangler is especially important to our ongoing story because of his focus on entities not at all dissimilar to Carl Raschke and John Keel's ultraterrestrials:

From his earliest years, Spangler has argued he was clairvoyantly aware of non-physical entities.

While in Morocco at age seven, he said he had a classical mystical experience of merging with a timeless presence of oneness within the cosmos and then remembering his existence prior to this life as well as the process by which he chose to become David Spangler and entered into his present incarnation.

Following that experience, he claims his awareness of and contact with various inner worlds of spirit was heightened, though he believed throughout his childhood that everyone shared the kind of perception and experience that he had.

This changed when he moved to Phoenix where he met other individuals who were clairvoyant or were acting as "channels" for non-physical entities and realized that his own inner experiences were not common.

This all landed Spangler in Scotland, where he met up with a bunch with the usual elite banking and intelligence connections:

In 1970, Spangler went to Britain where he visited the spiritual community of Findhorn in northern Scotland. He claimed to have been told by non-physical, spiritual contacts that he would find his "next cycle of work" in Europe; he arrived at Findhorn and was told that one of the founders, Eileen Caddy, had had a vision three years earlier that a David Spangler would be coming there to live and work in the community.

Not knowing who David Spangler was, but having read a small booklet written by him which someone sent to them, Eileen and her husband Peter Caddy and their Canadian colleague, Dorothy Maclean, the three founders of the Findhorn Community, had been waiting for someone with that name to arrive. Sometime after Spangler's arrival, he was offered and accepted joint directorship of the community along with Peter Caddy. He remained in the Findhorn Community until 1973.

So we have Scotland, military intelligence and ultraterrestrials. Of course. 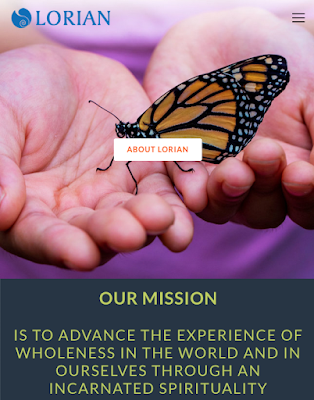 So let's add butterflies into the mix, since they seem to be the favorite metaphor for the Spangler Maker here to draw on to explain his theories of planetary spiritual transformation:

"But rather than think of this planetary transition as a laborious birth, I prefer the metaphor of the transubstantiation of the caterpillar into butterfly. First, the caterpillar, full and fattened, comes to rest in the safety of the chrysalis that it has constructed around itself. This is our modern civilization, fattened on centuries of exploitation and  expansion.

"What happens next is that the caterpillar slowly dissolves, consumed by secretions it has created. Think climate disruption, threat of nuclear annihilation, global pandemics, catastrophic floods and wildfires. Our culture is being dissolved by the very mechanisms we have put in place."

By "we," I assume Spangler is referring to the mechanisms his fellow Deerfield alumni have put into place.

With a little help from their UT friends., of course. 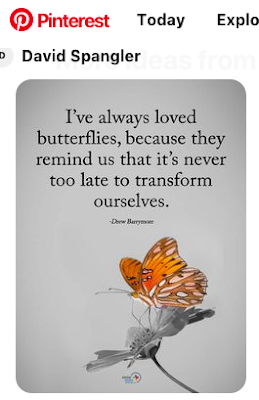 This from an article for Quest magazine (formerly known as Lucifer magazine):

A battle implies adversaries, winners and losers, conquerors and victims. Humanity has lived with these categories for millennia, and they are more than outworn now. They are dangerous.

Instead we need to think the way a caterpillar thinks as it transforms into a butterfly. The cells that formed the old structure of its body are not enemies to be defeated and cast out by the new shape; they contain the very life force and substance from which the new will be built once they surrender to the alchemical miracle of metamorphosis.

At this time, we may and do have opponents, but we do not have enemies. Everyone potentially has something vital to contribute to the new body that seeks emergence.

A little more about Findhorn, and a particular date we'd looked at prior:

Before the Findhorn Foundation in 1972, there was a Findhorn Trust as more people joined Eileen Caddy, Peter Caddy and Dorothy Maclean, who had arrived at the Caravan Park at Findhorn Bay on 17 November 1962. The Findhorn Foundation and surrounding Findhorn Ecovillage community at The Park, Findhorn, a village in Moray, Scotland, and at Cluny Hill in Forres, is now home to more than 400 people.

There are all kinds of the usual theories connecting to Findhorn, none of which I can presently confirm, but don't seem too far out of the overall narrative.

Britain and Canada were partners with USA in the early mind-control studies -- in fact British Intelligence was thought to be its most important liaison. In 1951 the CIA induced Britain to begin its own experimental projects shortly before Eileen Caddy began hearing an inner voice which identified itself as “God.”

Her then-current husband, Andrew Combe, from whom Peter Caddy virtually stole her away -- who was, by the way, Caddy’s own Royal Air Force (RAF) commander -- was a member of Moral Rearmament, into which the CIA had known ties.

Circa 1956 Peter Caddy and Sheena Govan (ex-British Intelligence) isolated Eileen Caddy on the Scottish island of Mull. It is populated largely in the south by Duart Clan Maclean. 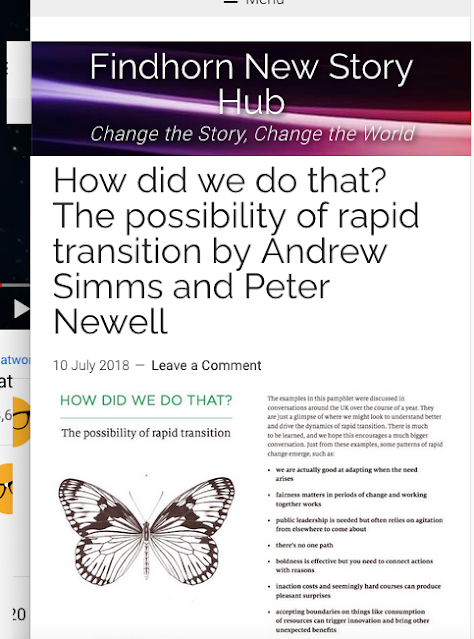 Eileen was subjected to what appears to be nothing other than a classical (Chinese/Korean-type) brainwashing procedure -- isolation, sleep deprivation, prolonged maintenance of painful positions, ego-devastating disparagement, etc. -- and was possibly given drugs as well.

This followed a previous, aborted, less intense episode which culminated in a suicide attempt by Eileen. Before the second, more intense procedure was performed Eileen refused to believe the “voice” was God apparently because her upbringing was strictly Protestant. Afterwards she accepted it.

The British military psychologists were at that time beginning to write the book on an infant field of research: personality testing and assessment. Whether Eileen scored high on tests or whether her husband just wanted to dump her is unknown. Also, before her first marriage, she and her brothers had run an inn catering to the RAF -- so she was a known entity.

In any event it appears that she was picked for some reason, and then RAF Officer, Peter Caddy, procured and developed her, exploiting her marital dissatisfaction. And it was not long (1954) until she was beginning to hear an inter-cerebral “voice” which identified itself as “God.”

Peter encouraged her to listen and accept by regaling her with tales of his own purported spiritual contact years earlier in Jerusalem, when a “voice” -- so he claimed -- had spoken to him.

So there you have it.

What's the point of this little history lesson, you may ask? Well, it's simple: what is going on in the world right now is the culmination of a lot of different projects and agendas that have been in the planning stages for a very long time. For whatever reason, it feels like the timetables have been moved up and everything is coming out of the toolbox.

But make no mistake: the MKUltraterrestrials are never far from the action. For some inexplicable reason, these entities-- which most people don't even think actually exist -- are always lurking in the corners in every single facet of the Cryptocratic agenda.

And I do mean always. Go see for yourself if you still don't believe me.

In fact, I'd argue that those entities are at the very root of the big "A" Agenda. And until people learn to accept this reality and come to terms with it, nothing will stop the Cryptocrats from driving the Crazy Train from Crazy Town right over the crazy fucking cliff.

Think on it a while then share your findings in the Den of Intrigue.