Jack Kirby, Mindbomb: Not of This World 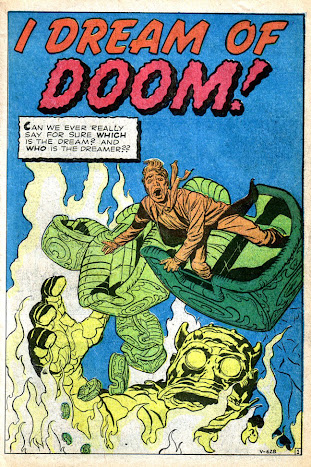 Sometimes I wonder if the ancient Gnostics weren't the first Geeks. Their cosmologies and tautologies were just as complex and overwrought as any superhero fan's, and their Apocalypses and Gospels can seem like fanfic, endlessly reimagining more prominent works and adding layers of sometimes impenetrable jargon and buzzwords.
The layered spiritual heirarchies emanating from the Godhead of the Monad- all the Aeons and Archons and the constant, competing reinterpretations of Platonic, Pagan and Jewish doctrine are eerily similar to the dense, Byzantine heirarchies of superhero fandom and its offshoots such as the Star Wars Universe.

Although modern Gnostics see the arc of history and the triumph of Christianity (and later Islam) as some kind of cosmic injustice, the plain fact of the matter is that the various schools of Gnosticism suffered not only from a lack of unity and discipline but from a tendency towards obscurantism and intellectual esotericism. All of this at the same time their Orthodox competitors were boiling down the complexities of the faith so that the humblest peasant could grasp it. Kind of a no-brainer who was going to win that struggle.

But there are moments when the Gnostic message is expressed in plain and simple language, cutting through the fog of allegory like a knife through tofu. The Gnostic Gospel of Thomas (a so-called "Sayings Gospel") is one example of this, as is The Hymn of Judas Thomas the Apostle in the Country of the Indians- better known as The Hymn of the Pearl- which tells the story of a prince who is sent on a mission by his father and along the way forgets his true (or secret) identity. The king sends a giant talking eagle to remind the prince of his true identity and guide his way back home.

Ironically, it would be modern day Geeks who would make sense of the clashing complexities of their ancient forerunners and bring Gnosticism- or a pop variant thereof- in the mainstream. As we've seen, Gnosis was in the bloodstream of 20th Century American pop culture and reached a kind of apotheosis in the original Star Trek. But it would be The Matrix- which began life as a comic-book formatted pitch- that would spark popular interest in Gnosticism, even if just for a very brief time.

The comic book connection is important, because there's something inherently and profoundly Gnostic about superhero universes. Sci-Fi- of which superheroes form a distinct subgenre- is also about salvation through knowledge.

The secret identity is a fundamentally Gnostic conceit, particularly when that false identity recasts the hero as humble or weak figure. The world may see Peter Parker as a bumbling, awkward AV nerd, but that's merely an illusion. Gnosis transformed him. You can go up and down the list of superheroes and sci-fi heroes to see this Gnostic impulse in action, and the tremendous appeal it has to hardcore fans, many of whom are seen by the world as a bunch of Peter Parker's, Clark Kent's and Barbara Gordon's.

But there's Gnostic and then there's Astro-Gnostic. Gnosticism has often been watered down by the schoolmarm impulse of polite pop culture analysis but AstroGnosticism is a different matter entirely. AstroGnosticism crosses over in the world of High Weirdness, where the world of metaphor and allegory is gleefully tossed over the railing and questions that the world wants to ignore are answered with a sense of wild abandon.

We looked at a variant on the AstroGnostic identity a while back (the short story "The Stalkers", illustrated by the great Alex Toth) but since 2012 has been about rediscovering Jack Kirby's work prior to the dawn of the Marvel Age, it should be no surprise that a far more faithful retelling of The Hymn of the Pearl should have emerged from the drafting table of pop culture's greatest and most influential Gnostic.

Rewriting ancient scripture in an AstroGnostic context was par for the course to the King. He used the extremely unlikely forum of Devil Dinosaur- essentially a pitch for an animated Saturday morning cartoon- to rewrite the story of Adam and Eve in the Garden of Eden. That story featured a pair of protohominid apes and a malfunctioning alien computer.

His God portfolio was Gnostic to the core, depicting a detached Monad turning his back on his creation. And in stories and illustrations throughout his career he recast angels and demons as aliens, expressing an explicit take of Ancient Astronaut Theory in his stories some ten years before Chariots of the Gods? hit the stands.

He and Stan Lee seemed to spend a lot of time discussing alien dimensions, since it was all over their stories from the time Kirby rejoined Marvel full-time, following on the heels of Kirby's pre-Marvel work.
Kirby continued on with the theme up until the very end of his career, not only with the final Fourth World stories (the New Gods et al were interdimensional aliens) but also his late-period series, Captain Victory (which was appropriated by James Cameron's Aliens) and Silver Star (which was appropriated by NBC's Heroes). 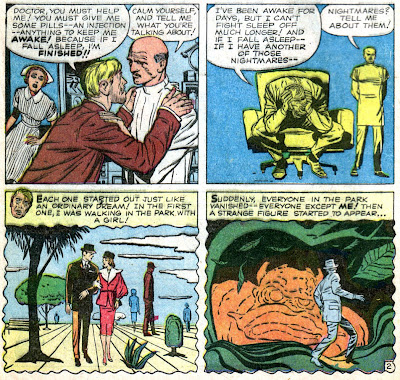 Then there's this story, which very much has the feeling of Lee/Kirby collaboration. In it, a man desperately seeks help for recurring nightmares featuring a typical Kirby monster of the period. Like many of Lee and Kirby's monster yarns, the text is a lot more interesting than the sensationalistic cover graphics might lead to believe. 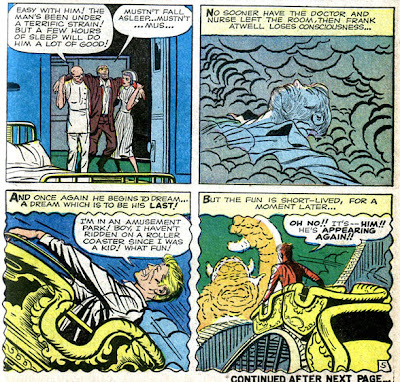 After telling his story to an ER doctor, the man is finally sedated. His dream begins with a childhood revery- riding on a roller coaster. That soon turns to terror, as the demon appears once again and abducts him from the ride. 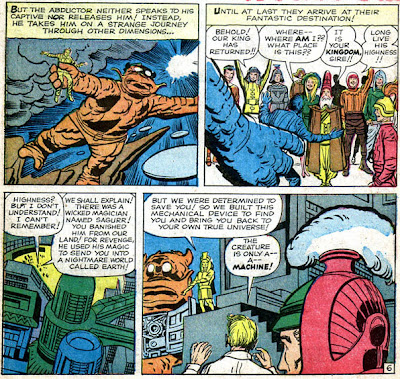 But the demon is fact an angel- an interdimensional robot sent to retrieve the man from the hell that is Earth. Just like in The Matrix, an evil Demiurge created Earth to torture the king. A spell of forgetfulness was cast, erasing the king's true memory of his identity and his home. Exactly as in The Hymn of the Pearl. 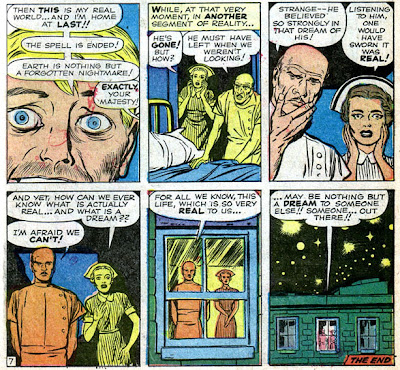 Besides a Gnostic parable, this story is also an alien abduction narrative, told a number of years before the Hill drama came to light. But the story is turned in on itself- the true abduction was that undertaken by the Demiurge/sorcerer, who cast the King down into this world of illusion as a form of torture. 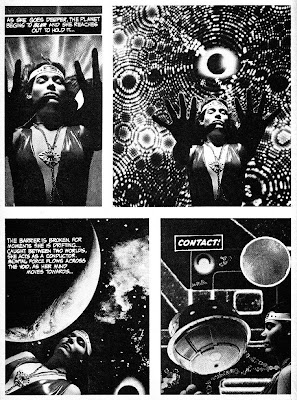 Heady stuff, but par for the course for Kirby's work following his split with Joe Simon. And one constant theme- beside the UFOs, AAT and other-dimensional realities-- was this whole concept of telepathic communication with alien beings, yet another life-long obsession with the King.
And of course the most startling example of this theme was his astonishing photo-collage fumetti, "Children of the Flaming Wheel" (from Spirit World #1).

I'm finding that the closer I look at Kirby's post-Simon, pre-Fantastic Four era, the more astonishing the stories seem. All the more so given how obscure most of the stories are today (and were at the time, come to think of it).

I don't think it all would have the same impact had I not immersed myself in the High Weird World, and most fans tend to ignore or gloss over this period. It reminds of how many X-Files fans totally dismiss the early-season alien walk-in ep, 'Space', which I thought at the time was the coolest damn thing I'd seen on TV, having read about the themes explored in it in the context of the Highly Weird.

Similarly, I also immersed myself in Kirby's generally unloved 80s work, since it worked quite nicely with my daily sacrament at the time. Of course, I wasn't alone in that, re: the aforementioned Aliens and Heroes swipes.

But there's something quite Gnostic about diving into the obscure depths of a pop culture creator's work and coming away with pearls.