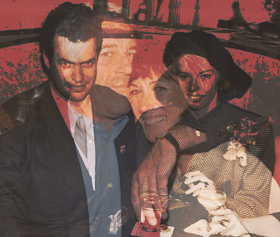 Say, did you hear about the rich guy who was obsessed with sex and weird science? The guy who turned his posh digs into a orgiastic fuckpad where minors were reportedly sexually abused? The guy who was plugged into networks of prominent scientists and luminaries from entertainment and the world of letters?

The guy with the mysterious, kind-of-scary girlfriend who had family connections to Jet Propulsion Laboratories? The guy who was accused of being an Israeli spy and died under mysterious circumstances? The guy whose seamy sexual escapades inspired a series on a streaming video service?


Hey, remember when the world wasn't totally bugfuck-batshit insane? Remember when things weren't spinning entirely out of control and we believed in stupid things like "laws of nature," "the power of reason" and "causality?" 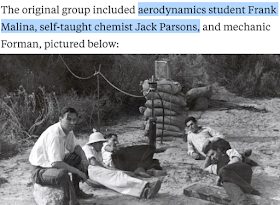 All of which is to say I can't wrap my head around this connection that Ghislaine Maxwell has to Jack Parsons, who died nine years before she was born. In case you missed it, Ghislaine's sister Christine is married to Roger Malina, whose father was Frank Malina, who formed Jet Propulsion Laboratories with Jack Parsons.

I mean, what are the odds of that? Especially given the eerie parallels between Jeff Epstein and Jack Parsons. But also because where and when Ghislaine was busted. 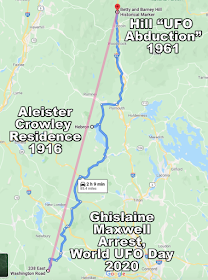 And that's right down the road (so to speak) from sites closely associated with two of the 20th century's most celebrated extraterrestrial contactees on World UFO Day (which is the 73rd anniversary of the incident in Corona, NM commonly known as the "Roswell Crash").

As you can see from the map, Ghislaine's hideout aligns with both Crowley's summer home and the site where Betty and Barney Hill claimed to be abducted by aliens.

Coincidence, you say? I don't think so. Why don't I? 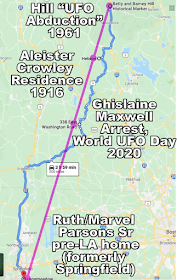 Because if you keep going south a ways you run smack dab in the town (Longmeadow, formerly part of Springfield) where Jack Parsons' parents were born and raised, and lived until making the move to Los Angeles.

And if you keep following the alignment south... 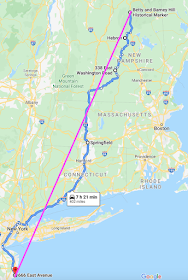 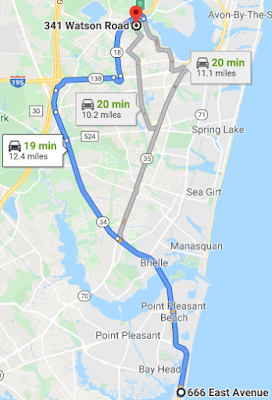 It's my belief that Hubbard chose this spot not only for the address, but to be near Camp Evans, where Project Diana was launched while he and Parsons were jerking each other off and waving swords around trying to summon Babalon (Project Diana involved bouncing radar signals off the Moon).

Get it: Dianetics, Project Diana?

Note Bay Head is cheek-by-jowl with Point Pleasant, where a short-lived Fox series about the world's most adorable Antichrist was allegedly set. Plus, Mothman.

BUT WAIT, IT GETS WEIRDER 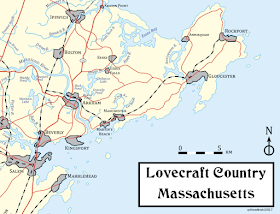 Before Ghislaine fucked off to Bradford, she was reportedly living in Manchester-By-The-Sea, in the Cape Ann region of Massachusetts. This puts Ghislaine dead center in Lovecraft Country. Some Lovecraft scholars believe MBTS is the real-life Innsmouth as well as the setting for the short story, "The Horror at Martin's Beach."

That's weird enough, but if you travel due north from the house where Ghislaine was holed up... 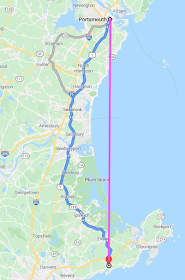 ...you run smack dab into Portsmouth, hometown of Betty and Barney Hill. 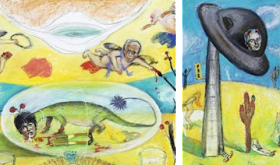 Which becomes all the more interesting when you consider that former Epstein sex-slave Maria Farmer painted Epstein riding a UFO and Ghislaine as a creature who wouldn't look at all out of place in a H.P. Lovecraft story.

ON A SUBMARINE MISSION FOR YOU, BABY 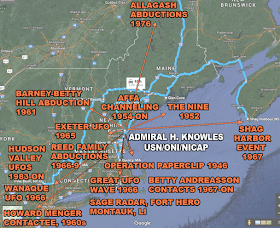 Just east of Portsmouth is Eliot, Maine, the town where Rear Admiral Herbert Bain Knowles (no relation) "retired" after the Second World War. I put "retired" in scare-quotes because it's pretty much certain he continued on working with the Office of Naval Intelligence after stepping down from active duty.

The evidence for this is the work he did with his neighbor Frances Swan, who began to claim contacts (through automatic writing) with extraterrestrials from a galactic federation called 'Affa'. Swan even reportedly summoned a flying saucer outside a military installation where she was being interrogated by ONI and Air Force Intelligence agents in 1959. 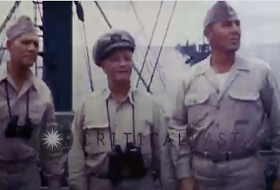 Knowles was also on the board of NICAP with a bunch of other Navy brass, and would later be the man who brought Betty and Barney Hill to the world's attention.

And as you can see, an alarming number of major UFO-related events occurred within his general neighborhood, including some of the best-known "abduction" accounts. Given his yen for mixing UFOlogy and Spiritualism, I'd bet good money that he was involved with Andrija Puharich and the Council of Nine at some point as well.

Did any of this have anything to do with bringing Ghislaine into this neck of the woods, rather than some distant locale where she could evade the long arm of the law more effectively? Is there some kind of ritual aspect to her movements in New England and to the day she was finally arrested? 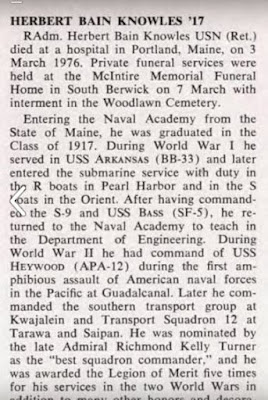 The reason I ask is that she and Admiral Knowles have something in common besides geography and that's they were both submarine pilots. In fact, they have submarines in common with L-Ron Hubbard as well (who did submarine chaser duty for a short while until his CO realized he was useless at it). What are the odds, I ask you? 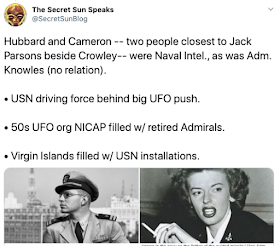 Which brings us to the fact that everyone we're dealing with here is not only clearly a spook, but has some connection to the US Navy as well.

Parsons and Malina's first client was the Navy. Hubbard and Marjorie Cameron were both Naval Intelligence (Hubbard would later claim he was assigned to bust up Parsons' "sex cult"), in fact Cameron was involved in top secret cartography work.

Cameron worked with the Joint Chiefs of Staff, where her responsibilities were so secretive, they turned her own life into an equally restrictive and disconnected existence. Due to the alienating nature of her work, Cameron requested a transfer and moved to Washington, D.C., where she served in a photographic science lab on the Potomac dubbed the “Hollywood Navy"... In the course of these duties, she met U.K. Prime Minister Winston Churchill in May 1943.

Yeah, and not to burst anyone's bubbles but Marjorie Cameron wasn't magically summoned by Parsons and Hubbard's Thelemic circle-jerks either:

When her brother James returned to the U.S. injured from service overseas, she went AWOL and returned to Iowa to see him, as a result of which she was court–martialed and confined to barracks for the rest of the war. For reasons unknown to her, she received an honorable discharge from the military in 1945. To join her family, she traveled to Pasadena, California, where her father and brothers had found work at the Jet Propulsion Laboratory (JPL). 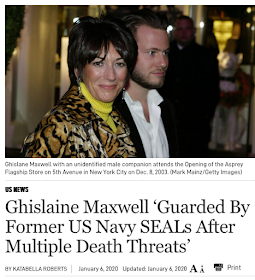 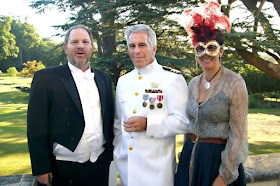 Oh, how the Mighty have fallen


Maxwell and Epstein, both widely assumed to be working for Mossad (and most probably the CIA and M16 as well) had their own Navy connections. Ghislaine was said to be bodyguarded by former Navy SEALs (presumably while she galavanting around Lovecraft Country) and Epstein's Lolita Island was in the same neighborhood as any number of Naval installations. 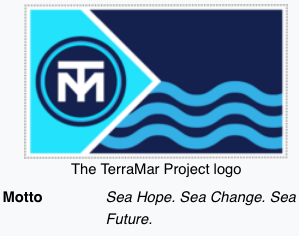 And like L-Ron Hubbard, Ghislaine was interested in creating her own ersatz-Navy, the TerraMar Project. Notice their motto calls to mind Hubbard's "Sea Org."

And just as Ghislaine and Epstein have been repeatedly accused of spying for the Israelis, so too was Jack Parsons:

(Theodor) Von Kármán put Parsons in touch with Herbert T. Rosenfeld, President of the Southern Californian chapter of the American Technion Society—a Zionist group dedicated to supporting the newly created State of Israel. Rosenfeld offered Parsons a job with the Israeli rocket program and hired him to produce technical reports for them.

In November 1950, as the Red Scare intensified, Parsons decided to migrate to Israel to pursue Rosenfeld's offer, but a Hughes secretary whom Parsons had asked to type up a portfolio of technical documents reported him to the FBI. She accused Parsons of espionage and attempted theft of classified company documents on the basis of some of the reports that he had sought to submit to the Technion Society.

Parsons was immediately fired from Hughes; the FBI investigated the complaint and were suspicious that Parsons was spying for the Israeli government.

Some have speculated that Parsons' spying on behalf of the Israelis is what ultimately got him killed. Probably more likely than him trying to create a homunculus, but what do I know? Not much. 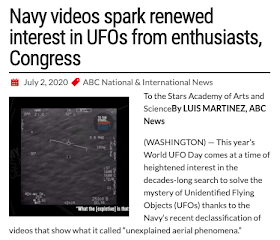 SO WHAT'S UP WITH THIS UFO BUSINESS THEN?

Jeffrey Epstein was interested in a lot of ridiculous pseudoscience like Transhumanism, but I've never heard anything about him being interested in UFOs. However, he and Ghislaine were both very tight with the Clintons, who are very much interested in the topic.

I don't know for sure if the two were into UFOlogy on the downlow, but that Maria Farmer painting and the weird details of Ghislaine's fugitive travels may well speak to that.

And of course the US Navy is very, very interested in UFOs, and has been for a very long time now. 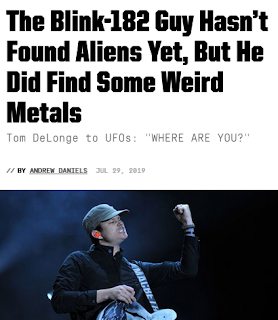 Then there's another UFO guy who travels deep in the same Clintonite circles Epstein and Ghislaine once ran with, Tom DeLonge. The former Blink-182 rocker seems to have been set up with all kinds of spooky types via former Clinton consigliere, John Podesta. Which, of course, is a whole other story.

Now disassociated from JPL and Aerojet, Parsons and Forman founded the Ad Astra Engineering Company, under which Parsons founded the chemical manufacturing Vulcan Powder Company. Ad Astra was subject to an FBI investigation under suspicion of espionage when security agents from the Manhattan Project discovered that Parsons and Forman had procured a chemical used in a top secret project for a material known only as x-metal, but they were later acquitted of any wrongdoing.

DeLonge also works with Thelemite Peter Levenda, who's been writing ancient astronaut-type books for To The Stars. Levenda is a student of Jack Parsons, Aleister Crowley and H.P. Lovecraft, and might be a good one to ask about Ghislaine and this UFO business.

You out there, Peter? Chime in if you are.

My guess is that there certainly is something to this, but you figured that already. But there's enough saucer-smoke in those circles and we know that these kinds of people are all fucking crazy and believe in a lot weirder bullshit than UFOs.

And good grief: Ghislaine and that family link to Jack Parsons. Still boggles my mind.

Oh, I forgot to elucidate the whole jailbait thing that links Parsons and Epstein: there were reports of some sweet-toothing at the Parsonage that caught the ear of the local fuzz, including a 15 year-old boy who claimed he was raped there. Knowing how these people operate, I bet there was a lot more youth-violating going on there that no one ever talked about.

And, of course, Parsons himself dumped his wife for her 17 year-old sister (though it's possible it began earlier since she moved in with them when she was 15), who later turned around and dumped his hairy ass for the irresistibly hunky charms of L-Ron. The two eloped to Florida, with all of Jack Parsons' hard-earned dollars in their pockets.

POSTSCRIPT: Bradford is named after the city in England, another major hub for grooming gangs I'm sure Epstein would have approved of 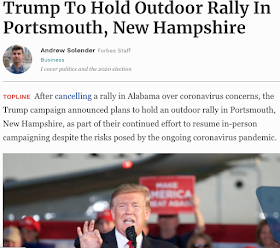 POSTPOSTSCRIPT: Our intrepid researcher Chay informs us Trump is holding a rally in Betty and Barney's hometown on 7/11.

Syncs: Skylab fell out of orbit on 7/11/1979. I experienced a compound fracture of my arm at day camp that same day. I scrawled "Skylab fell on me" on an equipment locker. This was across the street from the dumpster where Whitey Bulger would have one of his crony's bodies dumped a few months later.


HEY, YOU!
WANT MORE OF THE KIND OF
NEXT-LEVEL DOT-CONNECTING
YOU CAN'T GET ANYWHERE ELSE?

SUPPORT THE SECRET SUN!
HOW, YOU ASK? 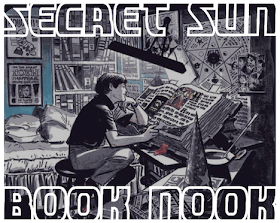 WELL, THE BOOK NOOK IS OPEN FOR BUSINESS!

Great books and other items to help you make sense of this insane new reality we've all been thrust into!

Feed your brains while you help feed The Secret Sun!