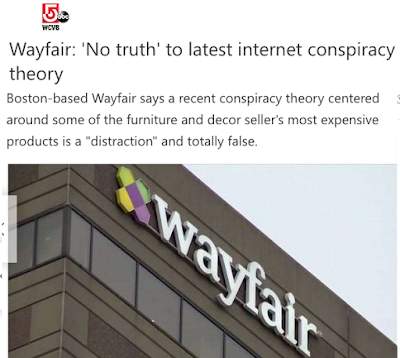 What is it about the summer? Why do these things always blow up when everyone should be sipping wine coolers and reading He Will Live Up in the Sky on the beach?

This Wayfair thing blew up awful big and awful fast, didn't it? I don't normally pay these things much mind when they first break. I'm of the old school when it comes to conspiracy research, meaning you wait for the dust to settle and for all the bullshit to dry up and waft away, and then figure out what's what.

But given this thing broke --on Reddit-- so soon after Ghislaine's bust and so soon after stories circulated she was a moderator or whatever-the-hell there, I can't help but wonder. 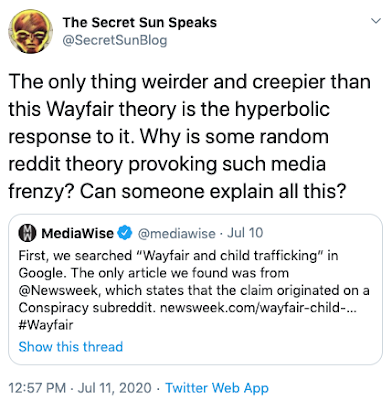 My first inclination was to ignore the story. I don't follow QAnon and I don't pay attention to Pizzagate, I don't think Donald Trump is a super-genius sent from God to save America from George Soros, and I don't need to pore over his or Q's tweets for coded revelations that our elites are a bunch of evil perverts, since anyone with any critical faculties at all is cosmically certain of that already.

As some of you might recall me mentioning once or twice, I grew up in Braintree, a town in which organized crime and human trafficking were (or are) never far below the surface. 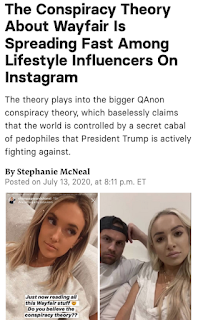 But one thing did bother me, quite a bit. Given the fact that we're certainly not lacking for news these days, I couldn't help but wonder why so many prominent news outlets piled onto what was just another random reddit conspiracy theory immediately. And they're still doing so, even though no less a conspiracist than Alex Jones himself dismissed the theory.

I mean, this is just a small sampling... 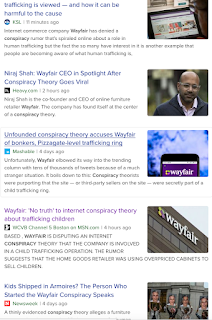 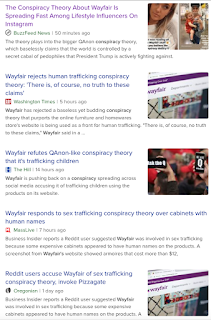 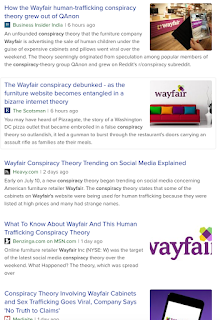 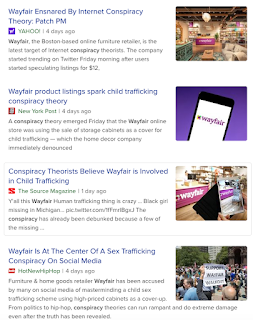 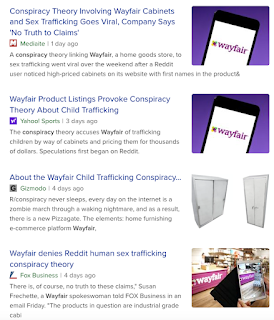 Here's a synopsis of the brouhaha from Business Insider:

The Wayfair conspiracy theory that became a social media sensation on Friday began with a post to the Conspiracy subreddit, which promotes user-submitted conspiracy theories, many thinly evidenced or unevidenced, to more than a million subscribers.

The unfounded conspiracy theory that the American furniture retailer Wayfair sold human children using listings for expensive cabinets and pillows went so viral that hundreds of thousands of people on Twitter alone have voiced their concerns.

It has been debunked by Snopes, Facebook's independent fact-checkers, and other journalists, and extremism researchers say the theory seemingly originated from, and continues to have close ties to, the QAnon conspiracy-theory movement.

The trend took the internet by storm Friday and continued throughout the weekend after a Reddit user claimed that high-priced cabinets and pillows on Wayfair's website were named after young Americans who went missing. 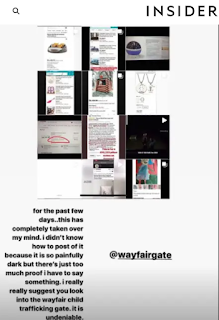 That's as fine as it goes, Business Insider. I get it. But why you did you post a montage of the listings as such low resolution? Can't we judge for ourselves?


This claim is largely based on the idea that $10,000 is simply too expensive for a cabinet, and that there has to be some other explanation — child trafficking — to justify its cost. In a statement to Newsweek, however, Wayfair noted that these were industrial grade cabinets, and that they had been accurately priced. Wayfair said that they temporarily removed these items, as the accompanying descriptions did not accurately explain the reason for the price point.

OK, accepting the denial from the accused is fine as far as it goes too, but since when does it count as a "debunking?" Oh wait, I forgot: it's 2020

Here's another quote from the Snopes piece:


Many mainstream outlets have debunked the conspiracy theory. Fact-checking site Snopes wrote that about 800,000 children are reported missing every year and “the fact that some of these product names were the same as the first names of children who had gone missing could easily be nothing more than a coincidence.”

Again, how does baseless speculation that the matching names are "nothing more than a coincidence" count as a debunking? Even by Snopes' pathetic standards, that's weak. Of course, they lose even more rigor: 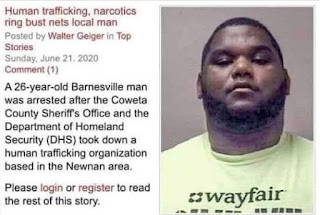 This is a genuine photograph of Fredrick Walker Jr. who was arrested on June 21, 2020, during a prostitution sting in Barnesville, Georgia. However, those sharing this image as “proof” of this Wayfair conspiracy theory failed to mention that this person was just one of nearly two dozen people who were arrested during this sting, that none of the other people arrested were wearing Wayfair shirts, that news reports about the arrest made no mention about any connection to the store, and that there’s no evidence that the victims in this case were children.

None of the others were wearing Wayfair shirts and there's no inside information about the company in a story about the arrest? Are you fucking kidding me? When did absence of evidence become evidence of absence?

Snopes is not even a joke anymore, they're a malicious, aggressive cancer on the public mind.

Mind you, I'm not saying the shirt is evidence of anything other than a shirt, but this argument is so shatteringly weak, I can't help but wonder now. 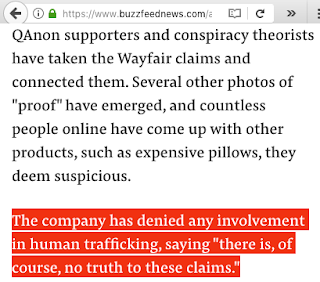 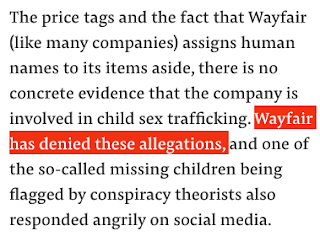 As you'd expect, Buzzfeed is even worse. I don't recall them ever accepting a denial as evidence in all the discredited hitpieces they've run over the years, but we'll let it slide, because Buzzfeed. 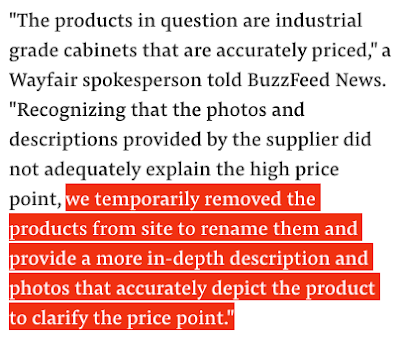 OK, where I come from that's called "tampering with evidence." 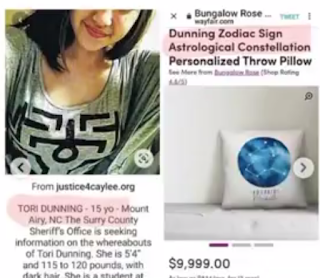 Why doesn't Wayfair-- or their press agents in the media-- explain why a lousy throw pillow is listed multiple times under different names and at a preposterous price? 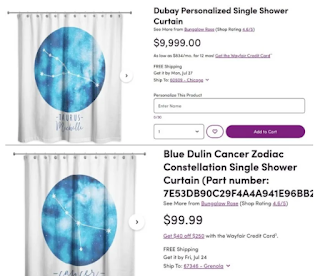 Why would the same exact item list for 99 and 9999 dollars? It's all very weird.

I may be wrong, but my understanding is that Wayfair operates as an open marketplace, where any vendors can list any items without the home office necessarily being aware of what's being sold. Is that the case here? If so, wouldn't they want this situation investigated thoroughly? I certainly would.

Red Flag #3 - Weird, slanted headlines: Too many to count, but two stood out. 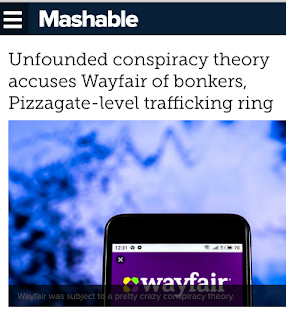 I thought Trashable was dead already, but maybe it's just brain-death. This isn't journalism, it's outright advocacy. 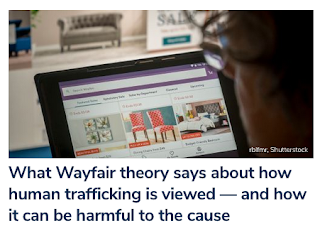 I realize the media is plagued by swarms of literally the most inept human beings this country ever produced, but this is just loopy.

The articles on this controversy I've read are all filled with the usual strawman arguments, but I can't tell if that's just the generation of total shitheads working at these outlets or a coordinated PR campaign sending out Wayfair talking points. It could well be both.

This made the news last year:

Employees at online furniture giant Wayfair are organizing a walkout to protest the retailer’s sale of $200,000 worth of beds and other furniture to a Texas detention center for migrant children.

The walkout, planned for Wednesday at 1:30 p.m. near the company’s Boston headquarters, comes after Wayfair executives said they would fulfill an order for beds and other items for a detention center in Carrizo Springs, Tex., according to two Wayfair employees who spoke on the condition of anonymity. The order was placed by BCFS, a government contractor that manages the facility.

Migrant children. Jesus. And how many of these kids end up "going missing" and "fall through the cracks in the system" every year now? Not a good look here. 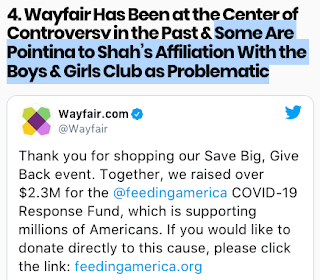 Shah and his wife Jill founded the Shah Family Foundation in 2017, whose aims are to support “innovative and transformative work in education, healthcare and the community,” according to its LinkedIn page. The foundation’s work is based in Boston, with Jill serving as its president and Shah as a board director.

One of the organization’s partners is the Boys & Girls Club of Boston. “They invest and innovate to increase the number of youth we impact,” the Shah Foundation’s website states.

Yeah, even the shill media is having trouble with this one...


Shah has also been connected with another controversy in recent days, this time through his foundation. Some people who support the Wayfair conspiracy theory have pointed to the Shah Family Foundation’s support of the Boys & Girls Club as problematic.

That’s because the Boys & Girls Club has been the subject of media investigations into allegations of child sexual abuse.

So, yeah. A lot of red flags there.

Mind you, they're not conclusive by any means, but they're troubling. And I have to say that Wayfair isn't really bowling me over with their response to the fiasco. And it's clear some kind of coordination is going on between the company and the media, at least from my vantage point.

Now, I don't know if this might be some bone Ghislaine threw to the Feds, who then planted the story on Reddit to provide the usual plausible denial, but the timing sure is strange. 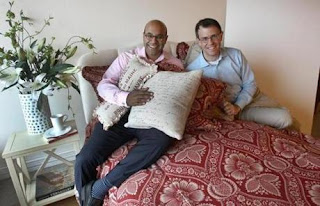 Oh, another weird thing: Wayfair co-founder Stephen Conine and I used to be neighbors, for about 8 years.

In fact, the place in New Jersey I moved into after I left Braintree was three houses down from his. I never met him since he was younger than me (he was in high school at the time).

It was a weird town, though. It's this woodsy little enclave that people the next town over didn't know exists, at least in my experience. I soon found out after moving there that two girls I was friends with from Braintree were also living there, which was just bizarre. It's not exactly what you might call a "hotspot."

Don't forget there's a specially-curated online store for books dealing with the very topics we discuss here at The Secret Sun!